Shaadi.com removes skin tone filter from its platform after an online petition 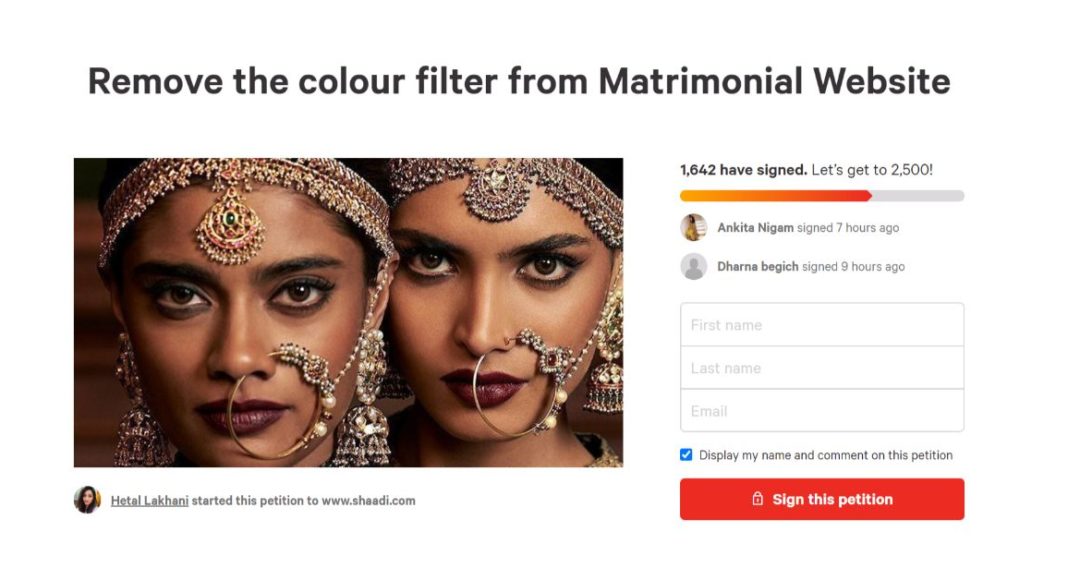 After a lot of criticism on the latest functionality brought by Shaadi.com to filter out matches according to preferred skin colour has now been turned down. A US-based woman had filed a petition against the matrimonial website via Change.org. The website has been facing the heat from several users on all its social media platform’s latest search feature.

“We demand that Shaadi.com must permanently remove its skin colour filter to prevent users from selectively searching for matches based on their preferred skin colour,” the petition says.

Shaadi.com is a popular matrimonial website being run in the country to find matches for marriages. The platform had a feature which has come into the controversies allowing users to search partners on the website based on the colour of their skin. After a petition filed against the filter option by US-based Hetal Lakhani via Change.org the controversial skin colour search filter has now been removed from the platform. This controversy has gained more momentum in support of ongoing black lives matter campaigns and anti-racism protests.

When the users on the website joined the website to find a potential match for themselves they were asked to select a skin colour by choosing how dark or light skin coloured match they are seeking for. This filter was found under the skin tone option on the platform. But now it has to remove the skin tone filter following pressure from the users.

On Twitter, the company responded to a tweet when asked about the skin tone filter, “Since we do not collect or capture this information on our platform, one cannot filter profiles using this. Hence, this search filter has no implications for matchmaking. That said, the search filter was a blind spot from our side and we have removed it.”

On this Shaadi.com responded, that the filter “was not serving any purpose” and was a “product debris we missed removing”. According to BBC, a Meghan Nagpal was using the website to find a potential life partner who would also be of Indian origin. “I emailed them (shaadi.com) and one representative said this is a filter required by most parents,”

Hetal and Megan are part of the same group where Megan shared this incident on the group and after getting to know about this she was shocked because a company usually has a social responsibility, Lakhani stated.

“I wanted to tackle this in a way that could make a difference so I started a petition.

“And it just took off like wildfire. Within 14 hours we had over 1,500 signatures. People were so glad we were raising the issue,” Lakhani told BBC

Hetal in its petition said, “Shaadi.com removing its colour filter doesn’t change the reality that people will continue to anchor desirability and suitability onto people’s skin colour. But it will stop giving users the option to discriminate on the basis of something so shallow and arbitrary.”

In India finding a match based on lighter skin colour is not the only obsession in the country but here people are still looking for matches based on caste, creed and religion and reasons that a girl having these traits fulfils the ability to become a perfect daughter in law. Such a filter by matrimonial website Shaadi.com encourages the users to make a biased search on its platform based on skin colour.

Komila Singhhttp://www.gadgetbridge.com
Komila is one of the most spirited tech writers at Gadget Bridge. Always up for a new challenge, she is an expert at dissecting technology and getting to its core. She loves to tinker with new mobile phones, tablets and headphones.
Facebook
Twitter
WhatsApp
Linkedin
ReddIt
Email
Previous article
Realme C3i with 5,000mAh battery and MediaTek Helio G70 processor launched
Next article
Realme X3 series of smartphones and Realme Buds Q to launch in India today