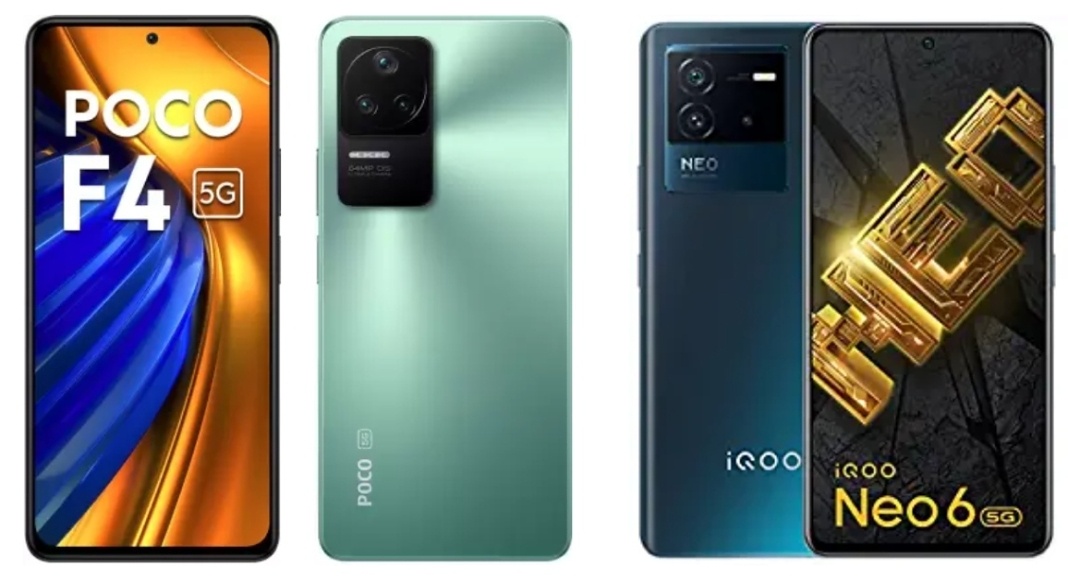 Recently, Xiaomi’s spinoff Poco unveiled the Poco F4 5G in India. The smartphone has a vibrant screen, an effective camera, and a strong battery. The 870 SoC powers the smartphone. The phone has a 120Hz AMOLED screen, three rear cameras, and other features. Here, the iQoo Neo 6 Vs Poco F4 5G are compared. See how the Poco F4 compares to the iQoo Neo 6 to determine which one is the better investment for you.

The Poco smartphone has a slightly bigger screen than the iQoo handset. Although the screen’s resolution, type and refresh rate is the same on both phones. In terms of performance both the devices are powered by Snapdragon 870 SoC and operate on Android 12 out of the box. Apart from that, Neo 6 houses a bigger 4,700 mAh battery with 80W fast charging whereas Poco F4 5G supports 67W fast charging with 4,500mAh under its hood.

Speaking of the cameras, both have a similar triple rear camera set up but Poco features a 20MP selfie camera whereas there is a 16MP front-facing camera on the iQoo smartphone. Most of the specifications of both the handsets are similar even the pricing is the same, however, Poco has more storage and RAM options than iQoo. So if you are looking for a 5G phone with a bigger battery and fast charging then you can go for the iQoo Neo 6, else the iQoo Neo 6

Komila Singhhttp://www.gadgetbridge.com
Komila is one of the most spirited tech writers at Gadget Bridge. Always up for a new challenge, she is an expert at dissecting technology and getting to its core. She loves to tinker with new mobile phones, tablets and headphones.
Facebook
Twitter
WhatsApp
Linkedin
ReddIt
Email
Previous article
TCL Mini LED 4K Google TV confirmed to arrive in India soon
Next article
How to remove water from your Android smartphone? (2022 guide)