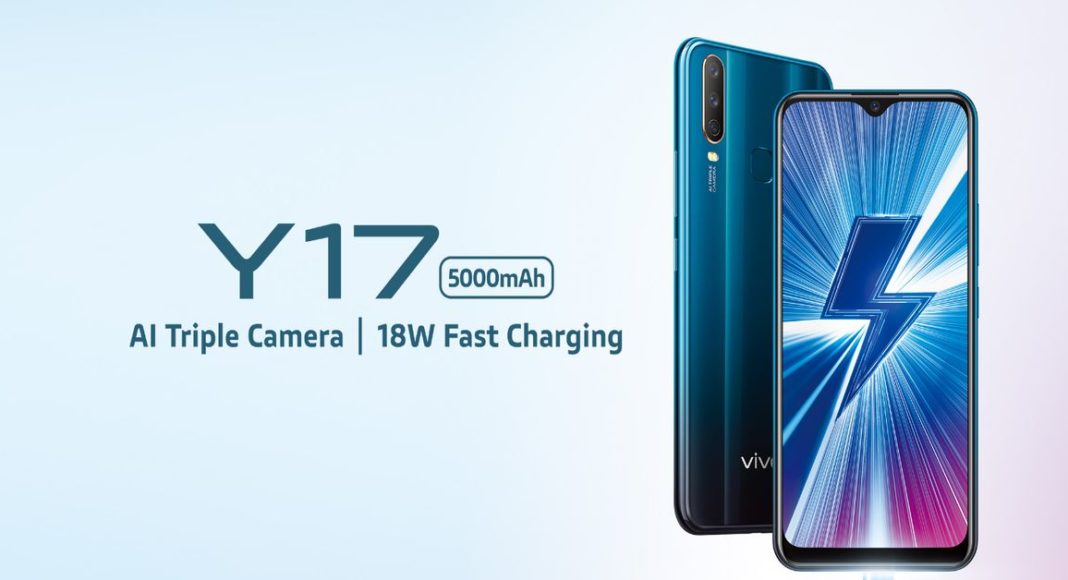 A few days ago, we saw the leaks of an upcoming device from Vivo – Vivo V17. And days later, the Vivo V17 has been made official as it is now listed on the official website of the company. The upcoming Vivo V17 comes in two colour variants and it will be powered by the Helio P35 SoC. Other than that, the main highlights of the Vivo V17 are its AI powered triple-rear camera along with 5,000mAh battery and 18W fast charging support.

Although the price of the Vivo V17 is currently not known but since it has been made official and is listed on the company’s website means that its launch is imminent. As mentioned above, it will come in two colour variants – Mineral Blue and Mystic Purple.

Talking about the design of the device, the Vivo V17 sports a waterdrop style notched display with a slightly broad chin at the bottom. While the back of the device has a gradient and metallic finish and a vertically stacked triple rear camera setup. There is also a rear-mounted fingerprint scanner on the back panel Vivo V17. The right edge of the Vivo V17 holds the volume button along with the power button while the bottom of the device holds the 3.5mm audio jack, the microphone, the speaker grille, and the Micro-USB port.

Coming to the specifications of the device, the Vivo V17 sports a 6.35-inch (720 x 1544 pixels) HD+ LCD display with an aspect ratio of 19.3:9 and 89% screen-to-body ratio. It is powered by an octa-core MediaTek Helio P35 CPU paired with 4GB RAM and 128GB of internal storage. The Vivo V17 runs Android 9 Pie skinned with Funtouch OS 9 and it reportedly packs a huge 5,000mAh battery with 18W dual-engine fast charging support. The device has dual-SIM card slot.

Aman Singhhttps://www.gadgetbridge.com/
Aman Kumar Singh has a Masters in Journalism and Mass Communication. He is a journalist, a photographer, a writer, a gamer, a movie addict and has a love for reading (everything). It’s his love of reading that has brought him knowledge in various fields including technology and gadgets. Talking about which, he loves to tweak and play with gadgets, new and old. And when he finds time, if he finds time, he can be seen playing video games or taking a new gadget for a test run.
Facebook
Twitter
WhatsApp
Linkedin
ReddIt
Email
Previous article
Nintendo’s affordable Switch gaming console to launch in June: Report
Next article
Flipkart Super Value Week Sale: Discounts on Honor 10 Lite, Honor 9N, Honor 9i and more