The phone will be unveiled on September 06 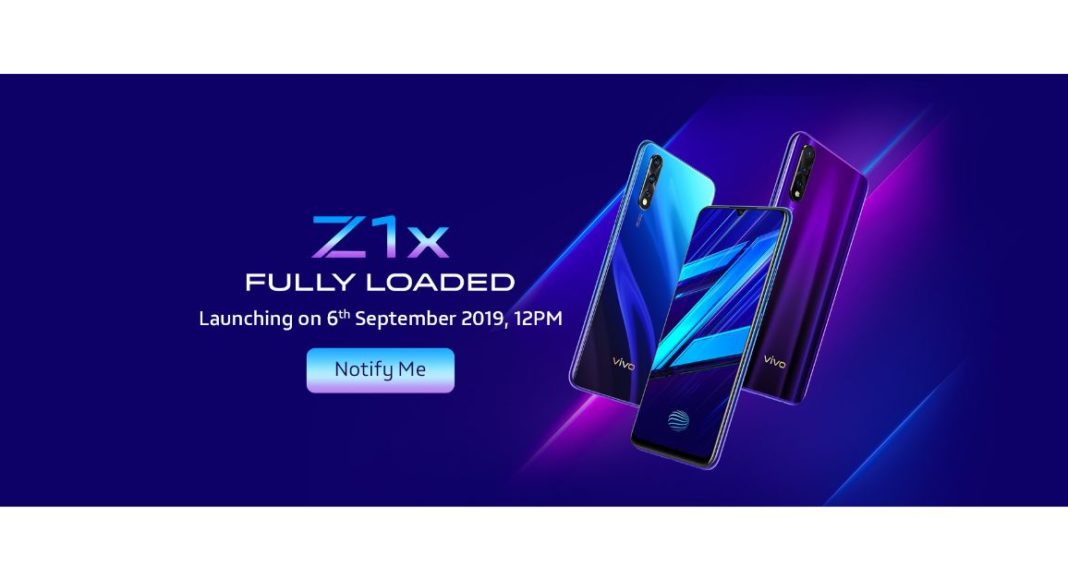 The Chinese smartphone company Vivo is all set to launch its new smartphone Vivo Z1x in the market. Recently we got to know that the smartphone will be launched in India on September 6 through a product listing on Flipkart. However, the product page did not reveal the specifications but now as the launch date is coming closer more and more leaks are pouring. Now ahead of its official launch Vivo Z1x full specifications have been leaked on the web. The key specifications include a 4500mAh battery that will come with the support of VOOC Flash Charge. The phone will be featuring a triple rear cameras setup along with waterdrop-style notch display and in-display fingerprint scanner already as well.

According to a report by GSMArena Vivo Z1x is expected to feature a 6.38-inch full-HD Super AMOLED display. The upcoming phone is suggested to be powered by Snapdragon 712 SoC coupled with 6GB RAM that will be offering 64GB and 128GB of internal storage options. The handset will run on Android Pie.

On the part of camera capabilities, Vivo Z1x is rumoured to come with a triple rear camera setup that will include a 48-megapixel main Sony IMX582 sensor, ultra-wide-angle sensor and a depth-sensing camera. For selfies and video calling it will be sporting a 32-megapixel front camera.

The handset will house a 4,500mAh battery with 22.5W Flash Charge support. As per the report the device will be offered in two colours Blue and Purple.

Right now the phone has been put on pre-registrations on the e-commerce website Flipkart. Apart from that recently the company also shared a video teaser of the upcoming smartphone on Twitter. As per the teaser, the phone is being displayed in two colour pearl blue and purple on the back panel. The rear panel will come with a triple rear camera set up aligned vertically along with an LED flashlight.  While on the front it will come with an in-display fingerprint sensor. The video also confirmed that Vivo Z1x will be launched on September 6 at 12 pm IST and will be available on both Flipkart as well as the company’s official website vivo.com.

Komila Singhhttp://www.gadgetbridge.com
Komila is one of the most spirited tech writers at Gadget Bridge. Always up for a new challenge, she is an expert at dissecting technology and getting to its core. She loves to tinker with new mobile phones, tablets and headphones.
Facebook
Twitter
WhatsApp
Linkedin
ReddIt
Email
Previous articleGarmin launched Fenix 6, Fenix 6S, and Fenix 6X smartwatches.
Next articleXiaomi announces MIUI 10 Beta Program exclusively for Redmi K20 Pro