WhatsApp now lets you decide who can add you to Groups 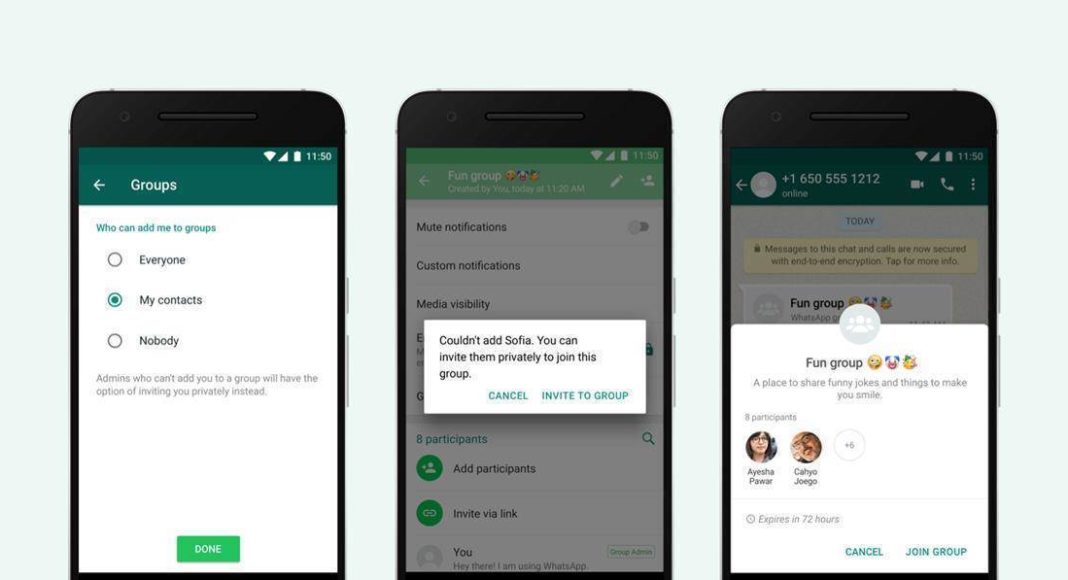 WhatsApp Groups are a necessary evil. Sometimes, being in a WhatsApp Groups helps save a lot of time as you don’t have to call different people in order to get your plan into action. However, there are also times when being a part of a group on WhatsApp is downright annoying, because you simply aren’t interested in the conversation other participants are having. Moreover, leaving WhatsApp Groups is not always an option, and that can also be bothersome as seeing a 100+ messages on muted group is not something everyone can ignore. But this won’t continue anymore as the Facebook-owned messaging app has will now let you decide who can add you to groups on WhatsApp.

According to the instant messaging app, the feature will enhance the privacy of the user on the app by giving them control over which WhatsApp users will be able to add them in various Groups.

To enable the new settings, users need to go to ‘Settings’ in their app and tap on the ‘Account’ section. Once it is open, the user needs to go to ‘Privacy’ and then to ‘Groups’. Once the option of Group is selected, they will be given three choices – Nobody, My Contacts and Everyone.

On selecting ‘Nobody’, the user will have the option to approve any group that the has been sent an invite to, if he accepts the invite he will be able to join the group else not. The person who is inviting the user to a group will have to send a private invite to the user which would expire in three days if left unattended. The ‘My Contacts’ option lets people who are in the contact list of the user make him a part of the group and lastly, the option of ‘Everyone’ lets anyone who has the user’s contact make him a part of a group.

With the new privacy setting, WhatsApp has given the users more control over whom can add him to a group. The WhatsApp update with these new settings will roll out to some users starting today. In the coming weeks the feature will be made available to all WhatsApp users across the globe.

WhatsApp groups are great for connecting with more than one people and sending/receiving messages to everyone at the same time. The groups in WhatsApp has many uses but it can be used to spread lies, fake news and misleading information. Since WhatsApp has given the user the ability to create groups where more than 200 participants can send/receive messages simultaneously, it has become a very sensitive platform.

Aman Singhhttps://www.gadgetbridge.com/
Aman Kumar Singh has a Masters in Journalism and Mass Communication. He is a journalist, a photographer, a writer, a gamer, a movie addict and has a love for reading (everything). It’s his love of reading that has brought him knowledge in various fields including technology and gadgets. Talking about which, he loves to tweak and play with gadgets, new and old. And when he finds time, if he finds time, he can be seen playing video games or taking a new gadget for a test run.
Facebook
Twitter
WhatsApp
Linkedin
ReddIt
Email
Previous article
Popular email app Spark makes its way to Android
Next article
This Chrome extension can ‘transform’ Gmail into Inbox for Gmail