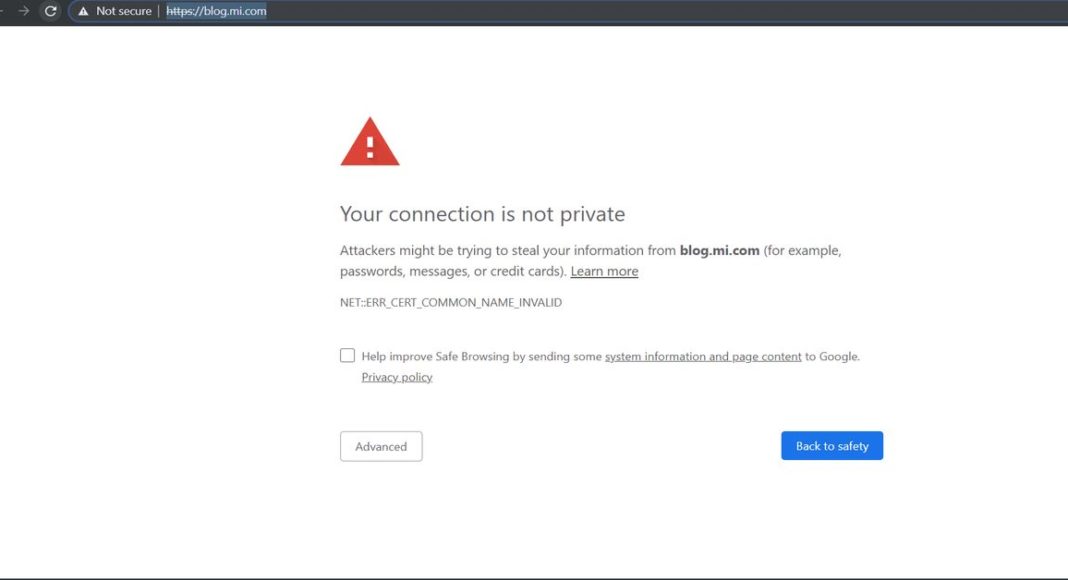 It looks like the Chinese smartphone makers are gathering are dominating the headlines today. Earlier we saw that Google has suspended and blocked its business with the Chinese electronics maker Huawei so that it won’t be able to use any of Google’s popular products like Gmail and YouTube. Then we saw the launch of the Redmi 7S in India and hours after the launch of the new device, the official blog of Xiaomi (www.blog.mi.com) is giving security and privacy issues and the website cannot be accessed.

If one tries to open the website, an error message is displayed on the platform saying that “Your connection is not private. Attackers might be trying to steal your information from blog.mi.com (for example, passwords, messages, or credit cards).” The error code being displayed on the blog website is “NET::ERR_CERT_COMMON_NAME_INVALID”.

At the time of writing Xiaomi’s website had been down for at least half an hour and the same error code displayed on it with the same message. Xiaomi hasn’t as yet commented on this, but we are curious to know the reason of this.

Earlier we saw that all the relationship and business with the Chinese smartphone maker Huawei has been cancelled not only by Google but also by Intel and Qualcomm as well. After the cancellation of the business with the Chinese electronics maker, all the Huawei smartphones won’t be receiving any more Android updates now. And the future Huawei devices won’t be coming with Android which are not open for commercial use. However, Huawei will be able to use Android versions available via Open Source licence. But its just a theory, the company had earlier said that it had been preparing for something like this for a long time and it has developed its own system and application similar to Google’s Android. And some Huawei devices in China are also being sold with this version of the Huawei’s system.

Although business cancellation with Huawei might not affect the other Chinese smartphone makers in the short term but the long-term consequences might be adverse for all the Chinese OEM makers. Although Mi’s blog is currently down, but the official product page of Xiaomi is running so the exact reason of the website being down is not known.

Aman Singhhttps://www.gadgetbridge.com/
Aman Kumar Singh has a Masters in Journalism and Mass Communication. He is a journalist, a photographer, a writer, a gamer, a movie addict and has a love for reading (everything). It’s his love of reading that has brought him knowledge in various fields including technology and gadgets. Talking about which, he loves to tweak and play with gadgets, new and old. And when he finds time, if he finds time, he can be seen playing video games or taking a new gadget for a test run.
Facebook
Twitter
WhatsApp
Linkedin
ReddIt
Email
Previous article
Sony or Microsoft: Who will be the real winner of the partnership?
Next article
Asus Zenfone 6 launch in India to happen soon, gets listed on Flipkart