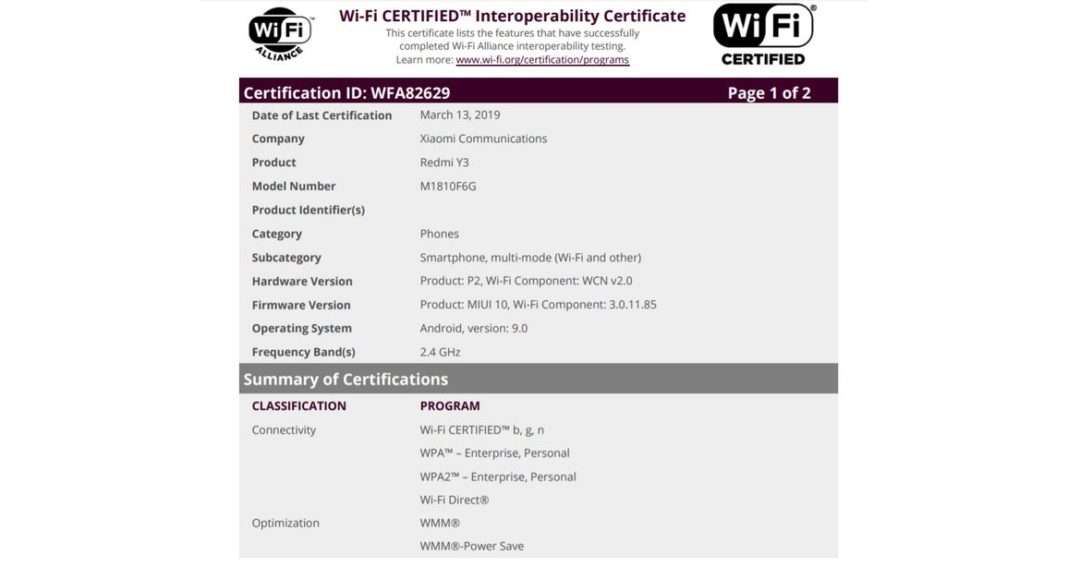 Xiaomi had launched its Y-series smartphones few years back with the Redmi Y1 followed by the Xiaomi Redmi Y1 Lite. The Y-series devices of Xiaomi were focused mainly on the youth and the device came with a good selfie-centric camera with front LED flash. After the launch of the Redmi Y1 the company came up with another device named Redmi Y2, which followed the Y1’s footprints as it too was focuses the youth.

Till now Xiaomi had not launched another device in the Redmi Y-series and neither had it announced any device for the line-up. But, recently the Redmi Y3 was seen on the Wi-Fi certification revealing certain specifications about the smartphone.

The Chinese smartphone maker, Xiaomi had launched the Redmi Y2 (Redmi S2 in China) back in June 2018 and it came with a price tag of Rs 10,499 for the 3GB RAM and 32GB storage variant. However, now the device sells for Rs 8,999 for the 3GB RAM variant. The Redmi Y2 was powered by Snapdragon 625 SoC and it sported a 5.99-inch HD display. It came with a 3GB RAM and a 4GB RAM variant with varying price tag under Rs 15,000 mark. But with the Redmi Y3 appearance on the Wi-Fi Alliance listing, the launch of the device is imminent and it could be announced in the coming months.

The Redmi Y2 held a 16MP AI camera so there is a possibility that the Redmi Y3 could hold a bigger megapixel camera with more selfie capturing features and camera modes to assist the selfie-loving troop. If launched, the Redmi Y3 should be priced somewhere around the Redmi Note 7 mark, which starts at Rs 9,999.

Aman Singhhttps://www.gadgetbridge.com/
Aman Kumar Singh has a Masters in Journalism and Mass Communication. He is a journalist, a photographer, a writer, a gamer, a movie addict and has a love for reading (everything). It’s his love of reading that has brought him knowledge in various fields including technology and gadgets. Talking about which, he loves to tweak and play with gadgets, new and old. And when he finds time, if he finds time, he can be seen playing video games or taking a new gadget for a test run.
Facebook
Twitter
WhatsApp
Linkedin
ReddIt
Email
Previous articleHow to make the most out of your Google storage
Next articleOnePlus 3 and OnePlus 3T OxygenOS 9 beta testing announced: Here’s how you can test the beta update

So far Apple and Samsung were the two companies ruling the premium wireless audio segment. Apple has a premium range of Apple EarPods while...
Read more
Mobiles

The Chinese smartphone company Realme is expected to be coming to India with a new smartphone. Realme C17 is likely to be getting launched...
Read more
Home Theatre

The Chinese Electronics manufacturer TCL announced the launch of its first audio product in India. The company has expanded its portfolio by launching the...
Read more

0
So far Apple and Samsung were the two companies ruling the premium wireless audio segment. Apple has a premium range of Apple EarPods while...

TCL launched its first TCL TS3015 soundbar in India with a...

TCL launched its first TCL TS3015 soundbar in India with a...