Xiaomi to launch Redmi 8A with 5,000mAh battery today in India

Redmi 8A is the successor of Redmi 7A 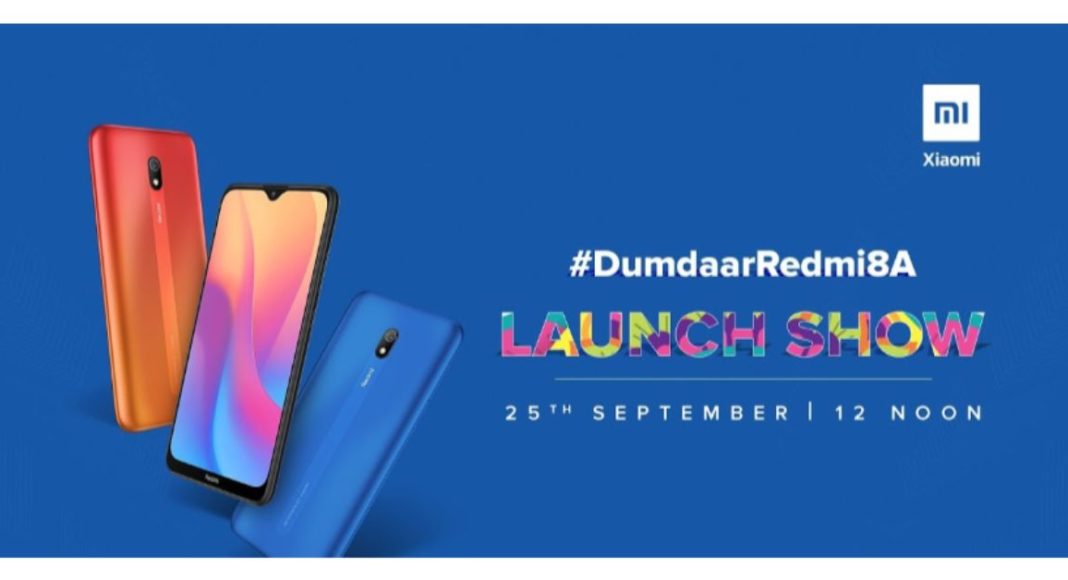 Xiaomi sub-brand Redmi is all set to launch its new smartphone in India today. The company will be launching Redmi 8A today under the budget segment targeting the youth. The upcoming smartphone has been doing the rounds on the internet for the past few weeks as it has been teased by Xiaomi across its social media platforms. Recently the smartphone was also spotted on the Chinese regulatory TENAA. Redmi 8A is the upgraded variant of the Redmi 7A, which the company had launched few months ago.

The Redmi 8A also got listed on the e-commerce website Flipkart, which only revealed few specifications of the smartphone. Read on to know more about the budget smartphone, its specifications and also how to watch the event live.

Redmi 8A expected pricing and how to watch the live stream

Xiaomi will be unveiling the Redmi 8A in India today at 12 noon IST. Those who are interested to watch the event live can watch it on the Xiaomi India YouTube channel. The event will also be live-streamed on the company’s website as well as on the microsite on Flipkart. The company has not revealed the pricing of the device. As you know that it is the upgraded version of the Redmi 7A so the pricing will also be similar to its predecessor. Redmi 7A was launched with a price tag of Rs 5,999 for the 2GB of RAM with 16GB of storage.

Recently Xiaomi India Chief Manu Kumar Jain shared a tear of Redmi 8A, which revealed that the phone will come with USB Type-C port. The Flipkart’s listing reveals that the handset will be sporting a waterdrop notch display along with slim bezels and a thick chin. It will be housing a battery capacity of 5,000mAh along with fast charging support. The microsite revealed that Redmi 8A will carry the “Aura wave grip” design for “great hand feels”.

As we mentioned earlier the smartphone also appeared on TENAA. The smartphone is expected to arrive with a 6.217-inch HD+ (720×1,520 pixels) TFT display. As per the listing it will be powered by an octa-core SoC paired with 4GB of RAM along with 64GB of storage.

For the optics, it is expected to come with a dual-camera set up with a 12-megapixel main sensor and an 8-megapixel selfie camera on the front placed inside the waterdrop notch. The device measures 156.3×75.4×9.4mm and weigh 190 grams.

Komila Singhhttp://www.gadgetbridge.com
Komila is one of the most spirited tech writers at Gadget Bridge. Always up for a new challenge, she is an expert at dissecting technology and getting to its core. She loves to tinker with new mobile phones, tablets and headphones.
Facebook
Twitter
WhatsApp
Linkedin
ReddIt
Email
Previous article
Samsung launched four new AKG earphones and headphones in India
Next article
Oppo Reno 2 Review: For super sharp imagery