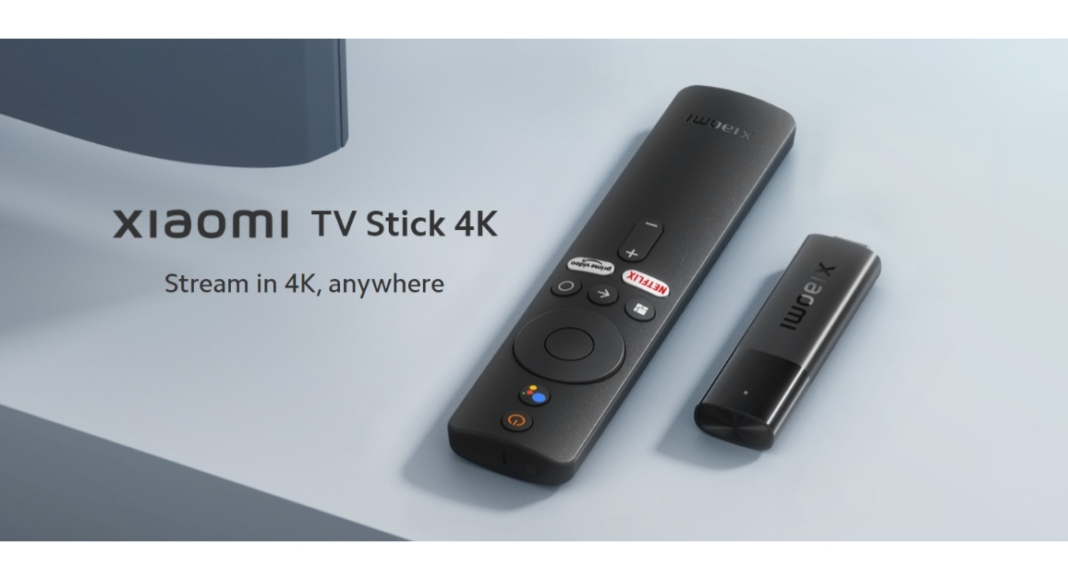 Last year Xiaomi introduced the Mi TV Stick. Now the company has launched the upgraded version of the streaming device. Xiaomi TV Stick 4K has been officially announced and also been listed on the company’s global website. The new model supports 4K streaming and also comes pre-installed with Android TV 11 and Dolby Vision. Read on to know more about the device.

Although the Xiaomi TV Stick 4K has been seen listed on the company’s website. But Xiaomi has neither revealed its pricing nor its availability details. To recall Mi TV Stick was launched in India at Rs 2,799. As the upgraded model now supports 4K streaming so it is expected to be more expensive than the Mi TV Stick.

In terms of design, the Xiaomi TV Stick 4K has been designed to be compact, with a slim and sleek design that weighs only 42.8 grams and measures 106.8×29.4×15.4mm, making it a lightweight device. It comes with a remote that includes dedicated Amazon Prime Video and Netflix shortcuts. There is a dedicated button to wake Google Assistant as well giving users hands-free control, get latest updates, news, play, search their favourite content and control other smart home devices.

Taking about the specifications, Xiaomi TV Stick 4K runs on Android TV Version 11 giving access to 400,000+ movies and shows from across your favourite apps. Get 7000+ apps from Google play. Play music and games, cast from any device, and more. The last generation operated on the Android TV version (9.0). The device is equipped with four Cortex-A35 processor cores, as well as a Mali-G31 MP2 GPU and 2GB of RAM and a storage capacity of 8GB. The Mi TV Stick was powered by a quad-core Cortex A53 processor backed by 1GB of RAM and 8GB of internal storage.

Dual-band Wi-Fi and Bluetooth v5.0 are among the Xiaomi TV Stick 4K’s wireless connectivity options. In addition to this, there is a Micro-USB port for charging and an HDMI port for connecting to a TV. The combination of 4K ultra-high-resolution output and Dolby Vision technology elevates video quality to new heights. While the Dolby Atmos and DTS HD technology support is said to give sounds more richness and realism than ever before.

It has Chromecast built-in, allowing users to cast content from all of their favourite apps to multiple devices, including smartphones, laptops, and tablets.

Komila Singhhttp://www.gadgetbridge.com
Komila is one of the most spirited tech writers at Gadget Bridge. Always up for a new challenge, she is an expert at dissecting technology and getting to its core. She loves to tinker with new mobile phones, tablets and headphones.
Facebook
Twitter
WhatsApp
Linkedin
ReddIt
Email
Previous articleOnePlus Buds Z2 with Active Noise Cancellation support launched globally
Next articleVivo Y32 powered by Snapdragon 680 SoC launched