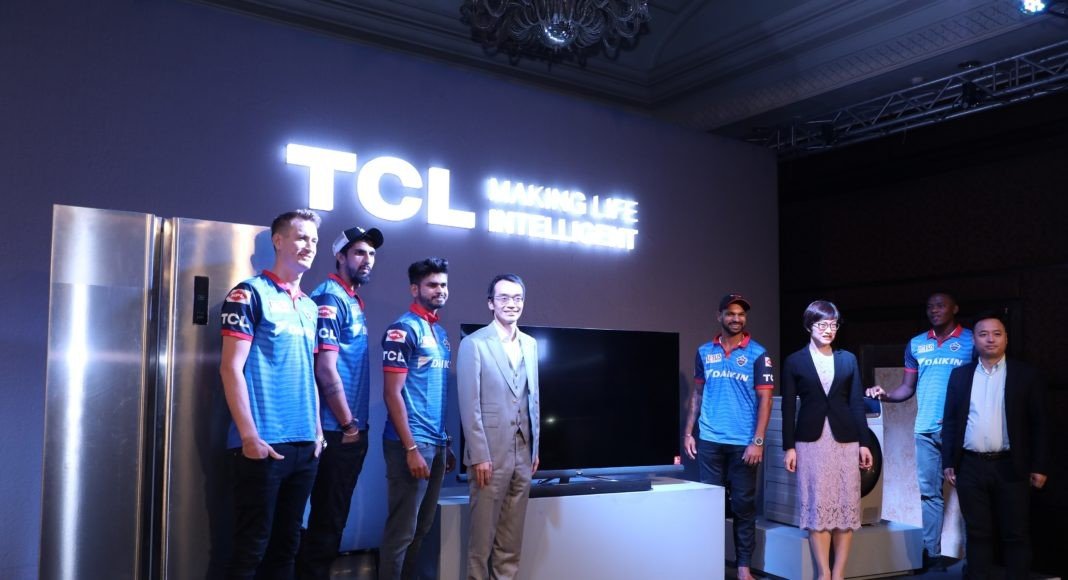 Chinese electronic maker TCL has released a series of smart home products in India today. The newly launched smart home products include ACs, washing machines, refrigerators, sound bars and audio solutions. It has also brought out the new C6 and P8 TV series in India. Along with products, the company has also partnered with Eros Now, ZEE5, Voot, Jio Cinema, Hungama Play, Hotstar, ALTBalaji, and YuppTV to give its users content released by these companies. The products were launched in the presence of the Delhi Capitals star cricketers.

The new TCL C6 and the P8 support 4K content and both of them come with 30W superlative audio quality by Onkyo speakers. The new TV-series offers an immersive visual experience as they come with micro-dimming technology and a 10-point white balance. The new technologies used in the TCL C6 and P8 gives them a more dynamic, diverse, and wide colour gamut and add to the vibrant contrast.

Other than that, the TCL C6 and the P8 series come with pre-installed Google services such as the Google Play Games, Google Play Movies & TV, YouTube, and Google Assistant. Other features of the newly launched TVs are voice search, Netflix, Spotify, and built-in Chromecast.

The company has also partnered with Eros Now, ZEE5, Voot, Jio Cinema, Hungama Play, Hotstar, ALTBalaji, and YuppTV to give content to the users. Also, TCL has made more than 9,50,000 hours of premium content in 25 languages and across 5 genres. The customers of TCL’s new TV series will also get one-month free access to Eros Now.

Speaking on the announcement, TCL India Country Manager, Mike Chen, said, “Our new range of smart home appliances is designed to cater to the specific requirements of tech-savvy Indian consumers and resonate with their mature sensibilities. The latest launch also takes us one step closer to our vision of becoming the first innovative consumer durable brand in India with a full range of smart home products and offering our customer an unparalleled connected experience. We have always stayed committed to offering the latest features at the most affordable prices to our users through products backed by state-of-the-art technologies, such as artificial intelligence and IoT. Going forward, we will continue to build more such products for our customers across India, with a focus on improving their lifestyles through intelligent, tech-led offerings.”

Along with the TVs, the company has also launched two new refrigerators in India considering that summer is here. One of them is a 520L side-by-side refrigerator while the other is a 545L double door intelligent refrigerator. Both the refrigerators come with inverter compressors and water dispensers along with no-frost technology, AAT freshness technology, smart swing airflow technology, and inner partition storage.

The new technology used in the TCL refrigerators helps in proper cooling of the food. They also come with fast freezing which cools the things inside the refrigerator in 2 minutes.

The K-series and the G-series washing machine from TCL come with water sealing and non-pollution design. Other features in both the newly launched washing machine series include honeycomb crystal drums, BLDC inverter motors, and intelligent automatic detergent inputs. The K-series also comes with a touch screen display.

The B-series washing machine from TCL comes with a waterfall spray wash, honeycomb crystal drum, an easily detachable and cleanable pulsator. There is also a 3-D storm wash, and a DDM motor present inside the B-series.

The new 3-star smart inverter ACs launched by TCL come with 1 tonne, 1.5 tonne and 2 tonne cooling capacities. Under the TCL Elite series, it has launched a fixed-speed 2-star 1.5 tonne AC. All the newly launched ACs are equipped with smart airflow and AI-inverter algorithm. Other than this, the TCL 3-star ACs are able to deliver rapid cooling in 30 seconds.

In its audio solutions, TCL has brought smart TV sound solutions with Bluetooth/line-in, SD card slot, USB, FM, and remote control; a Tower & Soundbar; and wired as well as Bluetooth wireless headphones. All the newly launched audio devices offer a clear and good audio experience to the user.

Aman Singhhttps://www.gadgetbridge.com/
Aman Kumar Singh has a Masters in Journalism and Mass Communication. He is a journalist, a photographer, a writer, a gamer, a movie addict and has a love for reading (everything). It’s his love of reading that has brought him knowledge in various fields including technology and gadgets. Talking about which, he loves to tweak and play with gadgets, new and old. And when he finds time, if he finds time, he can be seen playing video games or taking a new gadget for a test run.
Facebook
Twitter
WhatsApp
Linkedin
ReddIt
Email
Previous article
OnePlus 7 Pro price leaked online, would cost more than Rs 50,000
Next article
Huawei P30 Lite to go on its first sale in India tonight: Get all the details here