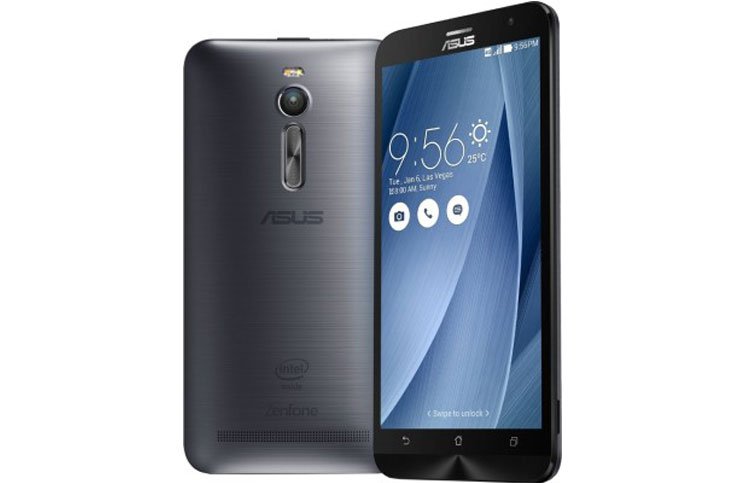 After a long while we have held a phone that has so much potential to be a market leader in its segment. Asus Zenfone 2 is a phone that has the qualities to give any smartphone, around the 20K mid segment category, a run for its money.

The Asus Zenfone 2 is a bulky yet well-built phone. Looks-wise the phone is not bad at all. Available in an array of colours we got to play around with the grey one. The plastic body has a brushed metallic finish, which just feels nice to hold. You get a large 5.5-inch touchscreen display that will display full HD 1080 graphics.

At the rear users get a nice volume rocker under the camera. This is somewhat similar to the one we got on the LG phones. The body is slightly curved from the back so that one can grip the phone in a better manner. The rear 13 MP camera comes with Dual LED flash. Users will also get the feather touch buttons under the screen for going to the homescreen and back to the previous place or menu.

The Asus Zenfone 2 excels when it comes to under the hood performance. Asus gave this baby everything except the bathroom tub. To start with, this phone runs an Intel Atom 2.3 GHz Quad-Core processor with 4 GB RAM. Yes, you read that correctly the Asus Zenphone 2 has 4 gigs off RAM. This not only makes the phone boot up quickly, but also makes all the apps and games run smoothly.

The phone also has 64 GB on board memory that can be expanded by a MicroSD card. The phones battery cannot be removed, but Asus does give you a large 3,000 mAh battery. This lasted for about 20 hours of use with 3G on and scattered Wi-Fi use.

The cameras on this phone are not bad. The 13 MP rear camera did give us good pictures in well lit areas. However, we had to make use of the flash once the lights died down. The camera performance goes down considerably when clicking in low light. The same goes for the front shooter. You get brilliant selfie shots in daylight, but not so much at night.

The display of the phone is outstanding. We enjoyed every bit of the gaming and movie experience. The sound of the loudspeaker is right up the alley. We would have appreciated a tad more bass.

The Asus Zenfone 2 is built for performance and does not clinch a muscle even when the most demanding games and applications are thrown at it. The mobile comes with the latest Android Lolipop OS and some neat apps right out of the box. Asus Zenfone 2 smartphone supports dual SIM cards, which is another plus in its report card. Overall, for a price of 22,990 we quite liked the phone as it showed great results and potential.

Cameras could have been better

Sulabh Purihttp://www.gadgetbridge.com
Sulabh Puri is the Editor In Chief of GadgetBridge.com. A content specialist, he started his career young and it has been a rewarding 15 years for him. Before heading Gadget Bridge, he was the Editor of Times of India (TOI) Technology and GadgetsNow.com. He has also led TOI’s international edit arm as the Editorial Head of Business Insider India and Tech Radar India. He has also worked with various media houses such as the India Today Group and Cybermedia. He loves everything ‘gadgety’ and enjoys tinkering with new tech toys and automobiles. A graduate in commerce from Delhi University, he is also an adept graphic designer. When he is not working, he can be found in the kitchen, cooking mouth-watering chocolate cakes and croissants.
Facebook
Twitter
WhatsApp
Linkedin
ReddIt
Email
Previous articleLava’s Flair P1 is the new affordable 3G in the town; priced at Rs 3,399
Next articleMicromax launches Canvas Doodle 4 with 6-inch qHD display at Rs 9,499 in India