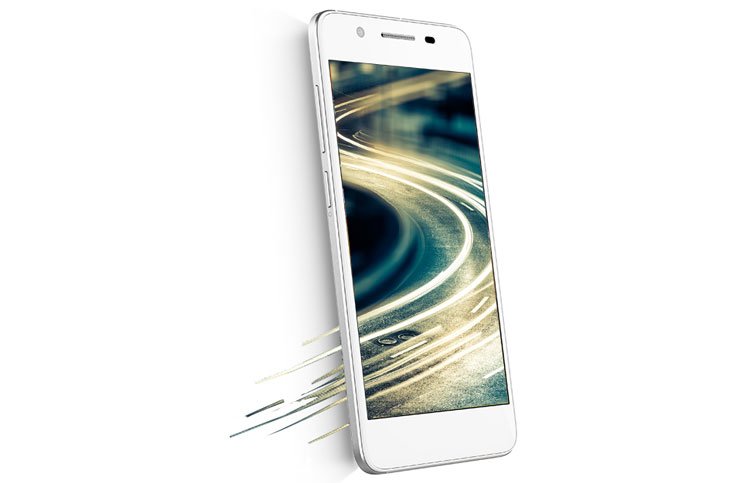 Micromax is trying to bring great mobile phones at affordable prices in India. The most recent smartphone from their house is the Micromax Canvas Knight 2 E471, which is a fabulous smartphone to work with.

The Micromax Canvas Knight 2 E471 is available in black, white and champagne colours. And we received the same for the review. The smartphone’s body is supported by a U-shaped frame. This frame curves gently at the four corners. The screen has Corning Gorilla Glass 3 over it and the phone also sports the same glass over the back panel as well. The mobile phone is extremely sleek, it is just 6.3mm thick and has 145g weight. The Micromax Canvas Knight 2 E471 has a 5-inch HD AMOLED capacitive touchscreen display, which comes with 16M colours and is very comfortable to use, even with just one hand.

The battery is non removable, so the users cannot replace it by themselves. This mobile phone has two Micro SIM card slots, which supports 4G connectivity. The SIM slot is on the right side and the power button is located on the left side of the phone along with the volume key. The USB port is located at the bottom of the phone and a 3.5mm headset jack is located at the top of the mobile phone. The primary camera is on the top left (rear) of the mobile phone, which comes with the autofocus and dual LED flash. A neat pair of headphones also come in the box for music lovers so that people can listen to the music without any problem.

The Micromax Canvas Knight 2 E471 has the 1.5GHz octa-core processor that comes along with 2GB of RAM for applications and services. The users also get 16GB of internal memory to store files and the users can extend this memory with the microSD card up to 32GB but for this, one have to place the memory card in the SIM 2 slot as the mobile phone does not have a separate memory card slot for this function. All this runs on the Qualcomm MSM8939 Snapdragon 615 chipset. For graphics an Adreno 405 is also available.

The primary camera of the Micromax Canvas Knight 2 E471 can capture 13-megapixel still images and 1080p videos. For selfies, there is a 5-megapixel secondary camera. The mobile phone has accelerometer, proximity and ambient light sensor and it also features HTML5 for browsing.

The camera captures very decent pictures but in low light and dark areas, the picture quality was not up to the mark. The camera requires sufficient amount of light for a beautiful snap. The camera app has a lot of good features, which comes with autofocus and dual LED flash. Other camera features include geo-tagging, touch focus and face detection.

Music apps and video galleries ran extremely well. The place where the phone stresses a bit is gaming. You can’t play games for too long on the mobile phone because the phone gets warm while playing. We faced no problems when it came to the audio and call quality on the Micromax Canvas Knight 2 E471. The supplied headphones get the job done and one can hear the beats clearly. Screen, image and video quality is above average.

Moving on to its battery life, the Micromax Canvas Knight 2 E471 does not manage to stay awake for a long duration. With 2,260 mAh battery inside it, it worked for 21 hours after a full charge (under nominal use). We were hoping that the battery would last for more than 24 hours. We tested the phone with Quadrant and it managed to score 19,941 points, which is a pretty good score for this mobile phone.

The Micromax Canvas Knight 2 E471 has good voice quality and also has some great features in it. It has the Android Lollipop 5.0 too. It comes preloaded with CleanMaster, Apps Center, Snapdeal, SwiftKey, Chaatz, Newshunt, Quikr, and Hotstar apps. The experience was quite smooth throughout. The company has priced the Micromax canvas knight 2 E471 for Rs 16,499. People can get the mobile phone for Rs 14,553 at any online retail store.

Sahiba Sethhttp://www.gadgetbridge.com
Sahiba Seth is a student, pursuing English (Hon) from Delhi University. She has been a trainer of HYTSE (Helping Youngsters To Speak English) in her school. She loves to interact with people and she is crazy about gadgets like mobiles and cameras. She likes to read and search about gadgets, and their features. She loves to stay in tune with the happenings of Hollywood and Bollywood. Also, she is passionate about reading novels and creative arts.
Facebook
Twitter
WhatsApp
Linkedin
ReddIt
Email
Previous articleAcer has launched new exciting notebooks: Aspire E5 Series, Aspire V Nitro-Black Edition and Aspire V3
Next articleUber is now available in 7 new Indian cities

- Advertisement -
- Advertisement -
A good attempt by Micromax, it has good looks and nice set of apps combined with performance. But, battery life and heating issues are a bit of a downer. Sahiba SethMicromax Canvas Knight 2 E471: A beautiful smartphone with Dual SIM 4G LTE (Review)