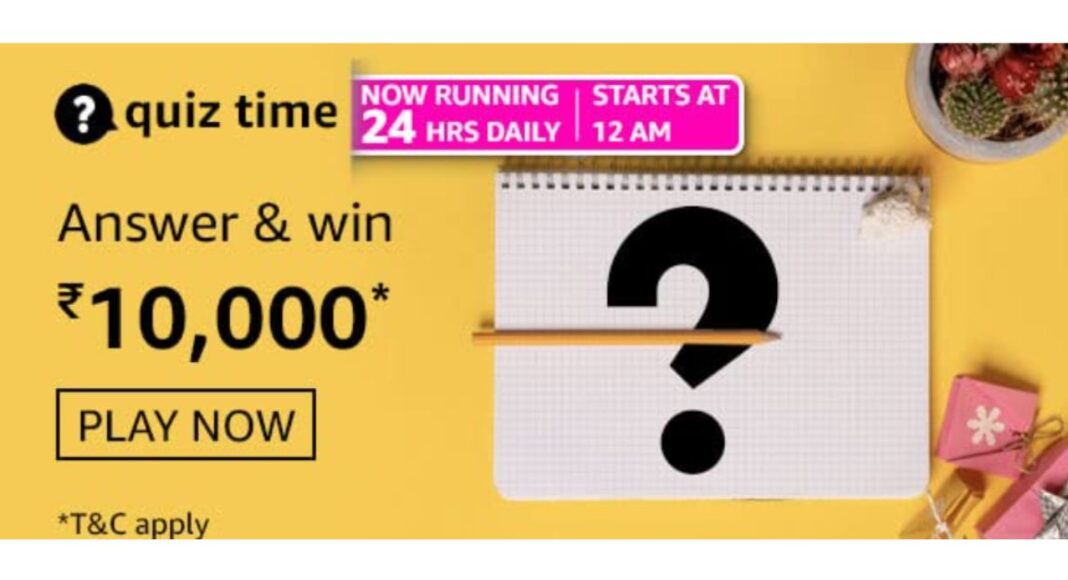 The e-commerce website Amazon continues to keep its customers entertained and in high spirits through their daily quizzes. 5 August 2021 Amazon Quiz has gone live now in its mobile app platform. The daily quiz contest conducted by the company brings an opportunity for the consumers to win exciting prizes. In today’s quiz, you can win the Rs 10,000 Amazon Pay Balance by answering all the questions correctly.

Every day Amazon brings a fresh set of questions for its customers that contains five easy questions based on general knowledge and current affairs. The quiz can be played on the Amazon app from 12 AM to 11:59 PM. You have to answer all the questions correctly; one wrong answer can make you eliminate from the quiz. By answering all the questions correctly, you will be shortlisted for a lucky draw. The results for the lucky draw will be announced at the end of the month. By participating in the quiz, you can win free products ranging from smartphones, other gadgets and Amazon Pay balance. Check out today’s quiz questions and answers to win 5 August 2021 Amazon Quiz: Today you can win Rs 10,000 Amazon Pay Balance.

Question 1: Which Indian-origin journalist has won the US’ top journalism award, the Pulitzer Prize 2021?

The answer is- D) Megha Rajagopalan

Question 2: Which of these is often referred to as the Gulf of Berbera?

The answer is- B) Gulf of Aden

Question 3: The WISA Woodsat will soon be launched from New Zealand on a rocket called the Electron. It is the world’s first what?

The answer is- A) Wooden satellite

Question 4: During which war was this weapon first introduced?

The answer is- A) World War I

Question 5: How many keys does this instrument most commonly have?

Komila Singhhttp://www.gadgetbridge.com
Komila is one of the most spirited tech writers at Gadget Bridge. Always up for a new challenge, she is an expert at dissecting technology and getting to its core. She loves to tinker with new mobile phones, tablets and headphones.
Facebook
Twitter
WhatsApp
Linkedin
ReddIt
Email
Previous articleLG Gram 2021 laptops with 11th Gen Intel Core processor and Iris X graphics launched in India
Next article5 August 2021 Flipkart Daily Trivia Quiz Answers: Answer to win exciting prizes