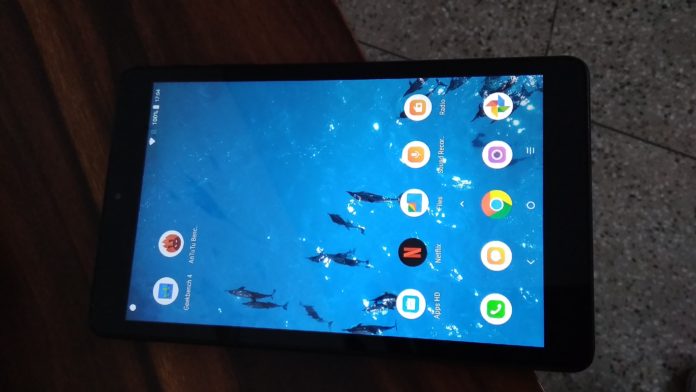 Alcatel, a French mobile handset maker owned by Nokia is known for making consumer friendly and affordable smartphones and tablets. Its smartphones and devices might not stand apart in terms of specifications or features, but they come at affordable pricing and doesn’t burn a hole in the pocket. One of its newly launched tablets is the Alcatel 3T 8, which comes with 4G VoLTE. It falls under the price category where the mid-range smartphones start. We played with it for a few days, it definitely proves itself as a good media consuming device and is good for reading on the go but it lacks on some fronts. Read to find out more about Alcatel 3T 8 4G tablet review:

The tablet looks quite simple and familiar in design. The 8 in its name means a screen size of 8-inch, which is accompanied with thick bezels on the top and bottom (with thinner bezels on the sides). There are no physical buttons on the front of the device, but there is a 5-megapixel camera for video calling. There are three capacitive keys at the bottom of the screen which appear when the device is unlocked – back, home and recent apps.

On the top of the device you will find the USB port for charging along with a 3.5mm headphone jack and a noise-cancellation mic. But there is no earpiece on the front of the device which means that you can’t call normally with the Alcatel 3T 8. For taking calls or video calls, you either need an earphone, headphone or you have to talk using the loudspeaker to listen to what the other person is saying. We certainly would not do that in the public eye, so carry an earphone or headphones with you if you want to make voice calls with this tablet.

Its display is of 1,280 x 720 resolution. Overall it is a pleasure to consume movies and tv-series on it but YouTube videos can’t go above 720p, which could be annoying if you want to watch full HD or 4K videos. Also, 4K videos play with major lag and frame drops, since it does not support 4K video playback at all.

The company has said that the standby time of the device is of 400 hours on 4G network and it can also give 8.35 hours of video streaming. Overall, it can be said that the Alcatel 3T 8 tablet is good for consuming media or binge watching a series because its battery can last long, which we liked.

Now, getting to the serious part, the Alcatel 3T 8 tablet is powered by a 1.5GHz MediaTek MT8765A quad-core processor. It comes in two variants – one with 2GB RAM and 16GB storage and the other with 3GB RAM and 32GB storage. We had the 3GB of RAM and 32GB of internal storage variant. A microSD card up to 128GB is also supported by both the variants of the device. So, if you want to store heavy files and movies on the device then a microSD card becomes a necessity, but that is additional cost.  Having a 3GB RAM makes it easier to switch between apps and keep more than 2 apps running in the background.

As mentioned earlier, this tablet would suit best if your needs are media-related, gaming on the device is not a pleasant experience. Normal games run smoothly on the device but graphically intensive games like PUBG or Asphalt 9 runs with extreme frame drops and heavy lags even in the lowest possible setting. So, gaming on this device is not recommended.

The battery of the Alcatel 3T 8 is of 4,080mAh, which could easily last for 1.5 days on a single charge. But the charger provided with has an output of 5V, so charging the device from 0 to 100% takes around 4 hours which could be a pain.

On the software side, the device runs Android 8.1 Oreo out of the box and till now there is no Android 9.0 Pie update available for the Alcatel 3T 8. There is no fingerprint scanner or face unlock on the device so you’ll have to rely on the old ways of unlocking the device – with patters, pin or password.

There is a parental control on the Alcatel 3T 8 tablet, which comes pre-installed in the device. It is insalled keeping  children in mind.. You can lock the apps you don’t want your children to access, lock the internet usage and even set timer for how long children would be able to use it.

There are some apps which come pre-installed with the device like Google, Facebook, Painter etc and there is little bloatware. On the adverse side, there is no in-built Gallery app for viewing photos so you will have to rely on Google Photos, or you will need to download third-party Gallery app from the Play Store.

There is only one back firing speaker on the device, which is not loud but is not dim as well, it just gets you by. In other words, the speakers of the device gets the job done, we would have wanted it to be a little louder on the tablet.

Alcatel 3T 8 4G tablet comes with an 8-megapixel camera at the back and a 5-megapixel camera at the front. Daylight photography delivers photos as expected of the device, but the selfie camera disappoints as it will remind you of an old VGA camera. Not expecting much from the device but the night-time photography is not decent in low light from the back as well as front camera. The clicked pictures come out pixelated and blurry, so low light photography shouldn’t be done with the device.

Talking about the benchmarks, on Geekbench, it scored 591 on single core and 1,648 on multi core. While on AnTuTu Benchmark it managed an overall score of 39,389, on CPU it got 19,442 and on GPU it got 2,546. The scores are extremely low considering the price it sells for, some smartphones in the same price offer better specs and a much higher benchmark score.

As mentioned before, Alcatel 3T 8 4G tablet is a device which would be suited for media consumers, who consume and watch shows on their smartphones. A screen bigger than a regular smartphone but smaller and lighter than a laptop, that’s its only selling point. It falls short on gaming performance and it can’t handle other heavy tasks, so people who want performance-based tasks out of the device shouldn’t look for it as they would be disappointed.

But if you want to read books while travelling or watch movies or YouTube without worrying about your battery to die down, then this is the device for you.

Garena Free Fire Redeem Codes Today 25 November 2022: Here is how to claim them

- Advertisment -
Alcatel, a French mobile handset maker owned by Nokia is known for making consumer friendly and affordable smartphones and tablets. Its smartphones and devices might not stand apart in terms of specifications or features, but they come at affordable pricing and doesn’t burn a...Alcatel 3T 8 tablet review: A good tablet for reading and multimedia