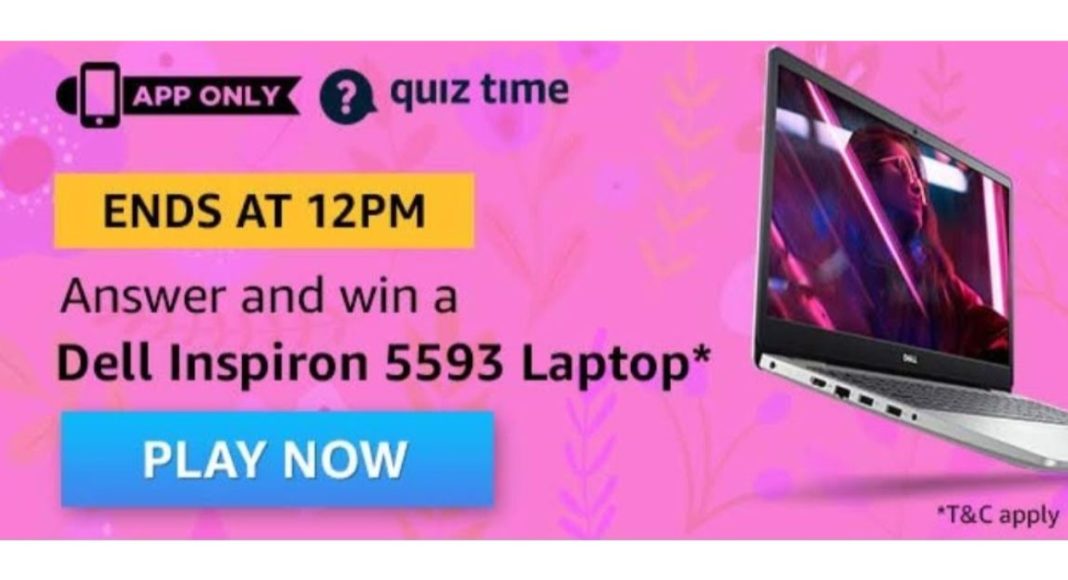 Amazon India is back with another lucrative quiz on its platform. Amazon Quiz has already gone live and today you can stand a chance to win Dell Inspiron 5593 Laptop. Every day the e-commerce platform brings an opportunity for its customers to win amazing prizes by answering five questions. The questionnaire is based on general knowledge and current affairs. If you managed to answer all the questions correctly you will be eligible to win gifts such as iPhone X, iPhone Xs, Seagate HDD, GoPro Hero 8 Camera, LG Smartphones, Samsung Galaxy S20, Air Purifier, Oppo smartphones, Amazon Pay Balance among others.

The Amazon Quiz is hosted for the app users only which means desktops users cannot participate in the quiz. So before participating just make sure you have downloaded the Amazon App. The lucky users might win something by answering all the questions correctly. The Amazon Quiz can be played daily from 8 AM to 12 noon. Daily Amazon gives a chance to millions of people across the country to win exciting prizes. To participate and win check out today’s answers of the Amazon Quiz.

Question 1: On April 1st, 2019, the Netherlands wing of which company announced that it had developed a product that allows a user to ‘talk to a Tulip?

The Answer is- Google

Question 2: Which former Vice President, born on April 1st, was the Permanent Representative of India to the UN from January 1993- January 1995?

The Answer is- Mohammad Hamid Ansari

Question 3: Which former India international was the head coach of the Bengal team that made it to the final of the 2020 Ranji trophy?

The Answer is- Arun Lal

Question 4: Which famous comedian born on April 2nd, first came to prominence after winning The Great Indian Laughter Challenge in 2007?

The Answer is- Kapil Sharma

The Answer is- Vietnam

The participants have to answer 5 questions that are based on general knowledge and current affairs. After clearing the daily quiz their name will be shortlisted for a lucky draw to select a winner. Amazon announces the results of the lucky draw at the end of the month. So today’s Quiz winner’s name will be announced on April 30.

Komila Singhhttp://www.gadgetbridge.com
Komila is one of the most spirited tech writers at Gadget Bridge. Always up for a new challenge, she is an expert at dissecting technology and getting to its core. She loves to tinker with new mobile phones, tablets and headphones.
Facebook
Twitter
WhatsApp
Linkedin
ReddIt
Email
Previous articleSmartphone war: Xiaomi likely to introduce 144MP camera sensor to take on Huawei and Samsung
Next articleFacebook launches new Messenger Desktop App for users to group video call and chats on a bigger screen