The device was launched in India a few months back 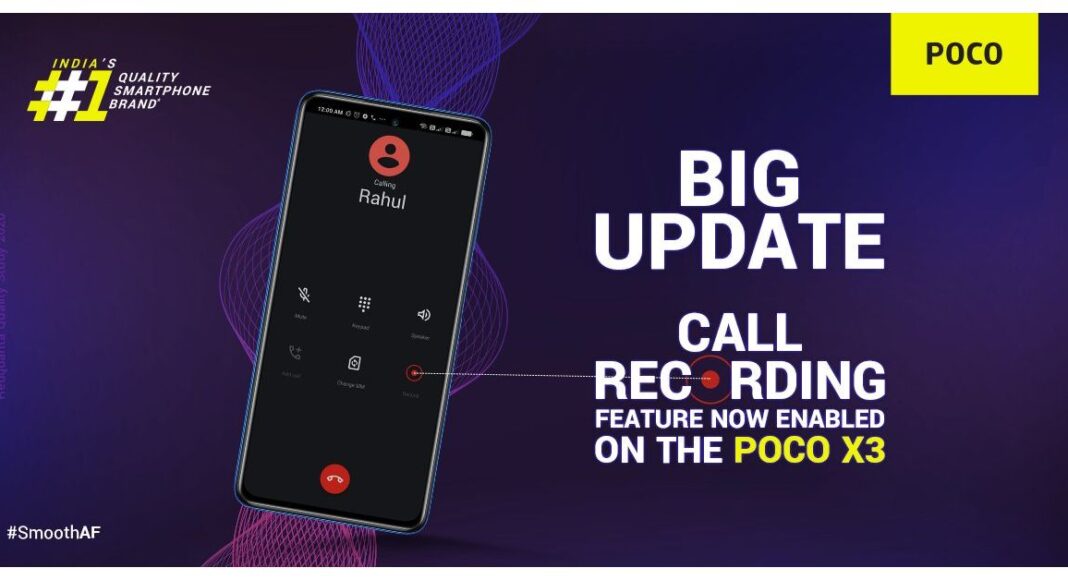 Xiaomi spin-off Poco has announced that now the Poco X3 user in India will be able to record calls on their device. Earlier this feature was not available for the Indian user but as per the company, it has now enabled this feature for use. The device is the successor of Poco X2 and was launched in India in September. Poco X3 is powered by Qualcomm Snapdragon 732G. Other key specs of the smartphone include a punch-hole display, quad rear camera setup and a 6,000mAh battery with 33W fast charging support.

Poco took to Twitter to announce that now the users in India can record calls on their Poco X3 smartphone. The tweet reads “The call-recording feature that you all wanted is now enabled on the #POCOX3.” While the company made this announcement Poco X3 including other Xiaomi and Redmi devices has been facing a boot loop. This issue is causing the device to restart repeatedly. This issue has occurred after the Poco X3, Mi 10, Redmi K20 Pro, Redmi Note 7 Pro and other phones received an error that reads,  “Find Device closed unexpectedly.”

But as per the company, certain lines of code misbehaving during an app update is a major cause for the issue.

Poco X3 features a 6.67-inch full-HD+ display with 1,080×2,340 pixels of resolution. The screen is supported by a 120Hz refresh rate with a 240Hz touch sampling rate, along with HDR10 support and protected with a layer of Corning Gorilla Glass 5. This phone is powered by an octa-core Qualcomm Snapdragon 732G processor with Adreno 618 GPU for graphics. This is paired with up to 8GB of LPDDR4X RAM and up to 128GB of UFS 2.1 storage. There is a dedicated slot to house a microSD card to further expand the internal memory to up to 256GB. The device also runs on Android 10 based MIUI 12 for Poco.

In addition to this, the smartphone houses a 6,000mAh battery that comes with 33W fast charging support. For connectivity, there is Wi-Fi, Bluetooth, 4G, GPS/ A-GPS, 3.5mm headphone jack, and a USB Type-C port. In terms of the sensor, the phone includes a side-mounted fingerprint sensor, an accelerometer, gyroscope, ambient light sensor as well as a proximity sensor. The device is IP53 rated for water and dust resistance

Komila Singhhttp://www.gadgetbridge.com
Komila is one of the most spirited tech writers at Gadget Bridge. Always up for a new challenge, she is an expert at dissecting technology and getting to its core. She loves to tinker with new mobile phones, tablets and headphones.
Facebook
Twitter
WhatsApp
Linkedin
ReddIt
Email
Previous articleHuami Zepp Z smartwatch with Amazon Alexa support launched
Next articleAmazon.in rolls out Made-in-India toy store to boost local talent