The device was launched in Europe last month 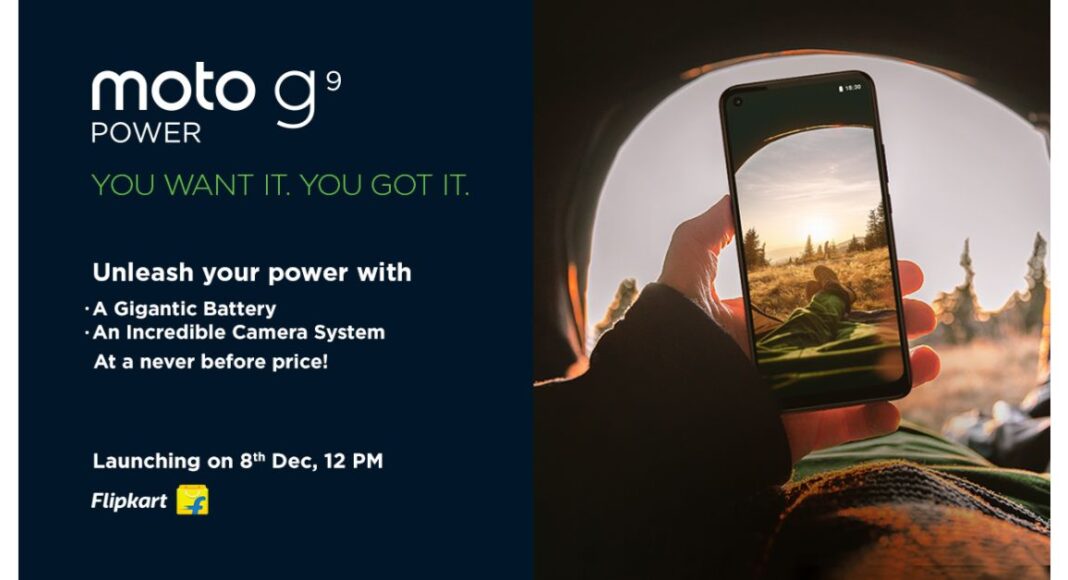 Motorola is all set to launch another new smartphone in the Indian market. The company has now confirmed to introduce Moto G9 Power on December 6 in the country. In addition to this, the company has also created a dedicated microsite on Flipkart to show its availability. The device recently also received BIS certification. Prior to the company’s announcement, the smartphone has already made its debut in the European market. The key details of this upcoming device include a  triple rear camera setup, a hole-punch display with slim bezels and a 6,000mAh battery. The device is powered by Qualcomm Snapdragon 662 SoC.

The ninth edition of the Moto G family already includes Moto G9, Moto G9 Plus, and Moto G9 Play. Now the company has decided to add another new addition to this line up namely Moto G9 Power. The company took to Twitter to declare that the smartphone will land in India on December 8. As per the dedicated microsite, the smartphone will launch at 12 noon. Also after the launch, the device will be available for sale via Flipkart.

To recall Moto G9 Power was launched in Europe last month priced at EUR 199 that translates to Rs 17,400 for the single 4GB of RAM with 128GB of storage option. The device will be available in Electric Violet and Metallic Sage colour options.

Moto G9 Power features a 6.8-inch HD+ IPS display with a resolution of 720×1,640 pixels. The smartphone runs on the stock Android 10 operating system. Under the hood, there is Qualcomm Snapdragon 662 SoC paired with 4GB RAM with 128GB of storage option. The internal storage can be expanded up to 512 GB with the use of a microSD card.

Komila Singhhttp://www.gadgetbridge.com
Komila is one of the most spirited tech writers at Gadget Bridge. Always up for a new challenge, she is an expert at dissecting technology and getting to its core. She loves to tinker with new mobile phones, tablets and headphones.
Facebook
Twitter
WhatsApp
Linkedin
ReddIt
Email
Previous article
Netflix StreamFest begins today: Here is how you start streaming for free
Next article
Noise launched six new audio devices in India- Noise Defy, Noise One Bluetooth Headphones, Noise Vibe Wireless Speaker, Noise Tune Neckbands