The event is going to take place via an online event due to COVID-19. 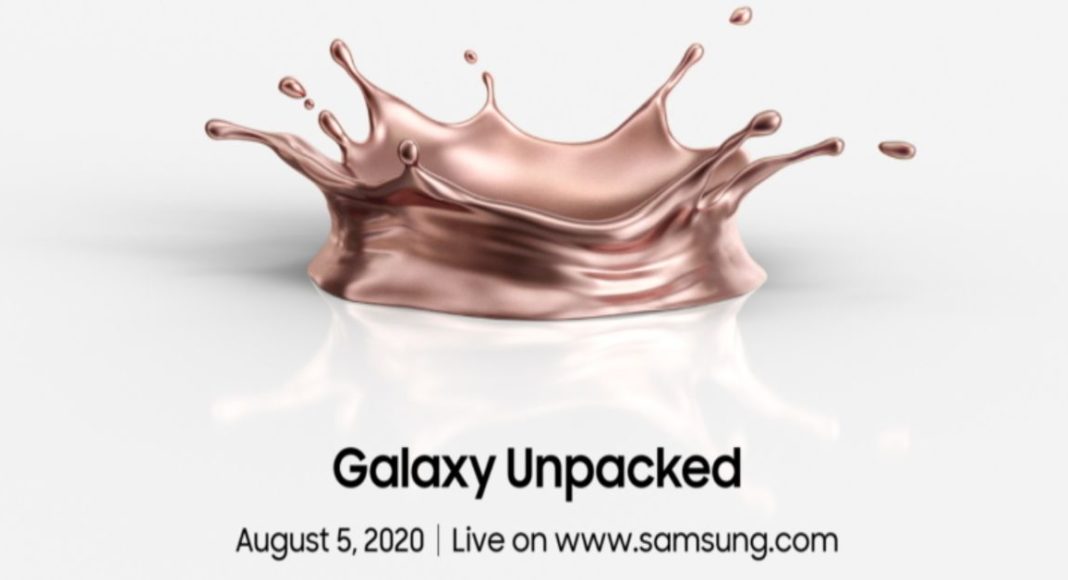 The South Korean smartphone company Samsung has officially confirmed a concrete date of its Galaxy Unpacked event. On August 5 we are going to see the significant product launches of the year at the upcoming Samsung’s event. This time the company will be unveiling its next iteration of Note and the foldable smartphone- Galaxy Fold 2 and Galaxy Note 20.

We have already seen the leaked renders of Galaxy Z Flip 5G and Galaxy Note 20 Ultra in a copper or Mystic Bronze colour option, Tab S7, Tab S7+ and Galaxy Watch 3 too. But we haven’t seen the speculated Z Fold 2. However, the company’s invite for the Samsung Galaxy Unpacked 2020 also suggests this time we are going to see the devices in a new copper colour that we already know but anyways we are still excited for the event.

To recall, the company mistakenly shared the latest renders of the upcoming Samsung Galaxy Note 20 Ultra on its own website just below the Galaxy Note 8’s product image. Therefore, suggesting a new copper colour variant for its next flagship.

The renders have revealed that the Galaxy Note 20 Ultra will have a camera set up similar to the S20 series which is speculated to include a 108-megapixel sensor along with a 12-megapixel ultra-wide lens and a 13-megapixel periscopic style zoom lens supported by a laser autofocus module. The new bronze ring around each sensor and the all-new copper colour gives the smartphone a more elegant as well premium look. Speculations are being made that the S Pen stylus will be smaller than what we have seen with the last generation of Note. The Pen will come with a metal body.

Moreover, Samsung Galaxy Note 20 device is suggested to feature a 60Hz 1080p display and is going to be powered by Qualcomm Snapdragon 865/Exynos 990 processor. Also, a 4,000mAh battery with 25W fast charging tech with a similar camera set up as of Galaxy S20 is said to be offered. While Galaxy Note 20 Ultra is rumoured to launch with a WQHD+ resolution display with a higher refresh rate of 120Hz, Qualcomm Snapdragon 865/Exynos 990 processor and a 108-megapixel sensor.

Samsung is also rumoured to launch a 5G variant of Galaxy Z Flip at the same event. For this, the device will be powered by Qualcomm Snapdragon 865 chipset. Rumours also suggest that this time Samsung Galaxy Fold 2 will be called Galaxy Z Fold and will be receiving a major design change for a more improved experience.

Komila Singhhttp://www.gadgetbridge.com
Komila is one of the most spirited tech writers at Gadget Bridge. Always up for a new challenge, she is an expert at dissecting technology and getting to its core. She loves to tinker with new mobile phones, tablets and headphones.
Facebook
Twitter
WhatsApp
Linkedin
ReddIt
Email
Previous article
July 8 Amazon Quiz: Participate to win Vivo S1 smartphone
Next article
OnePlus Nord confirmed to launch on July 21, pre-bookings kicks off on July 15