The aim is to support unhindered teaching and learning no matter where it’s taking place. 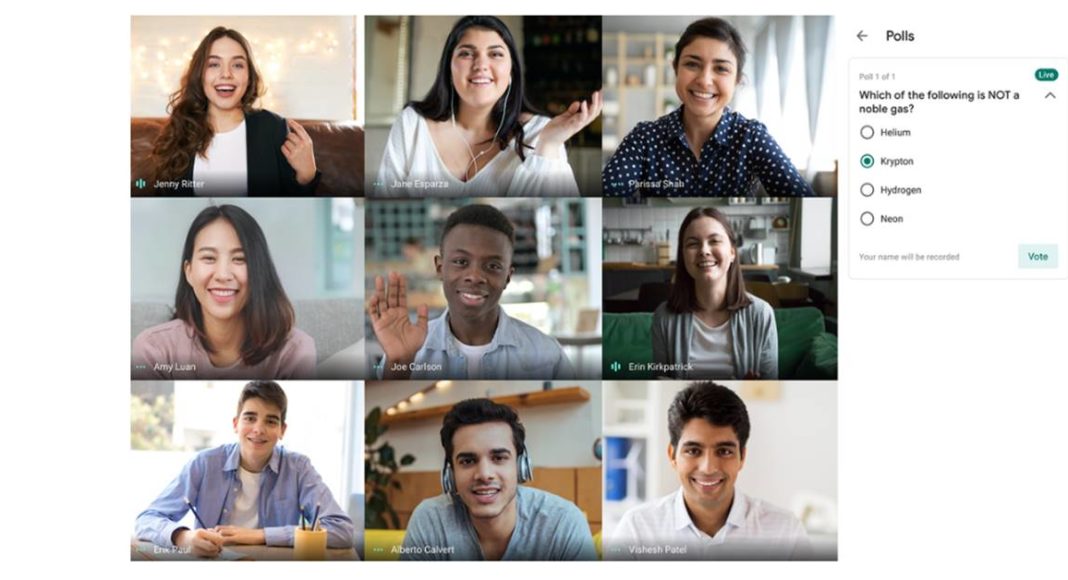 During a global back-to-school event, The Anywhere School, by Google for Education on August 11, 2020, Google revealed about the many new capabilities like 7×7 grid view, hand raising option, customized background, that it has planned to introduce in Meet to support teaching and learning no matter where it’s taking place. With these new features, it seems that Google is aiming to take on Zoom.

In a blog post, Google stated that moderators will have options to prohibit participants from joining meetings after they’ve been ejected or after they’ve been denied entry twice. Besides this, there will be end meetings for all participants when the class is finished. The tech giant further revealed that the moderators can also manage to join requests with ease by accepting or rejecting them in bulk. They can even disable in-meeting chat and set restrictions on who can present during a meeting. Furthermore, Google will introduce a setting that requires the teacher to join first.

Moreover, Google has also shared new features to increase engagement with the students virtually. In September, it would be introducing larger tiled views with a 7×7 grid so one can see up to 49 students at once. Additionally, there will also be a collaborative whiteboard with Jamboard in Meet so you can encourage students to share ideas and try creative approaches to lessons.

In the month of October, Google Meet will get blur or replace backgrounds so everyone feels more comfortable during distance-learning classes. Mind you! Admins can disable custom backgrounds as needed. Besides this, there will be an option for attendance tracking to see and track which students attended the virtual class. Along with these features, there are breakout rooms so educators can split classes into simultaneous small group discussions.

Later this year, Google would introduce hand-raising to help the teachers identify students who may need help or have a question. Moreover, the Q&A features will also be introduced to provide a way for students to ask questions without disrupting the flow of the class discussion or lesson, and polling to engage students to share their voice

Additionally, Google will launch temporary recordings later this year on Meet, which will be available to all Education customers for free. However, premium recordings will still be part of G Suite Enterprise for Education. With this new feature, any meeting host can record a meeting and share the recording within their domain for up to 30 days before the video expires. Mind you! Temporary recordings cannot be shared outside the host’s domain or downloaded.

“We’re granting continued free access to premium recordings until temporary recordings are available later this year (note: this is replacing the promotion for access to premium Meet features including live streaming and meetings of up to 250 participants that will be ending on September 30th),” said Zach Yeskel, Group Product Manager, Google for Education.

As far as new features that one can expect in Classroom, the Classes page will soon have a to-do widget for students and a to-review widget for teachers. In addition to sharing course join codes, educators can now share a link to join classes with a single click. Link-sharing allows educators to share classes anywhere they communicate with students, including in messaging platforms such as WhatsApp.  Google also revealed that soon educators and students will be able to run originality reports on Google Slides, in addition to Google Docs, as well as in multiple languages, including Spanish, Portuguese, Norwegian, Swedish, Indonesian and Italian.

In order to make Google Classroom accessible to more learners in their native language, the tech giant will be launching Classroom in 10 additional Indian languages. It further added that soon Classroom will support over 54 languages globally; with even more coming in the future.