HomeMobilesHuawei Nova 7 series to get unveiled on April 23, the company...

Huawei Nova 7 series to get unveiled on April 23, the company confirmed the launch date

The device is tipped to have 40W fast charging support. 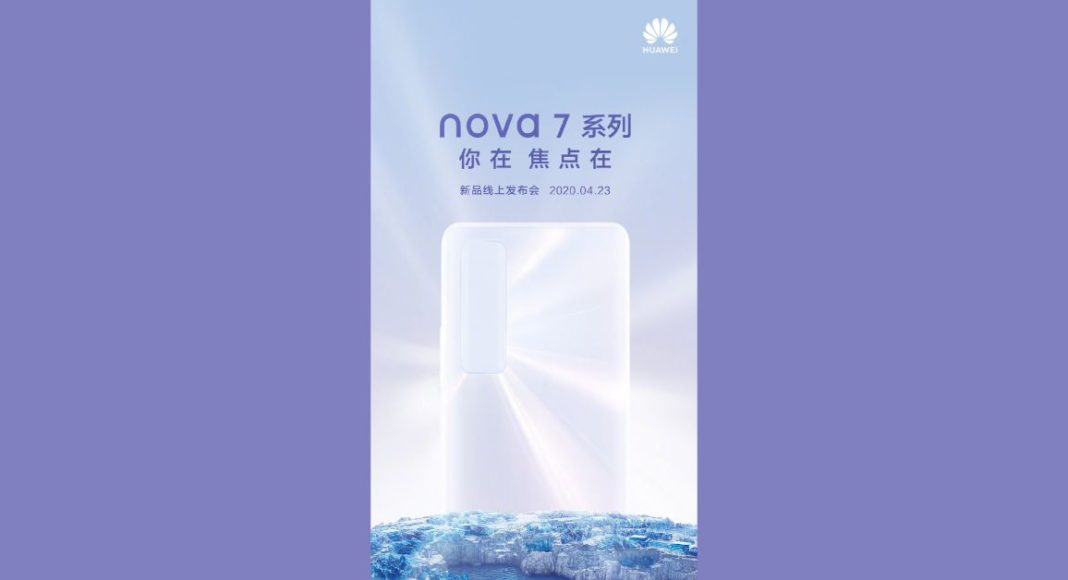 There have been a lot of rumours that have been doing the rounds about Huawei upcoming smartphone series Nova 7. The company has finally confirmed its new lineup of smartphones by teasing the launch date of the device on a social media channel. Now the company is going to launch Huawei Nova 7 series on April 23.

The Chinese smartphone company Huawei has recently launched a new smartphone series under its sub-brand Honor. The sub-brand has released Honor 30 series that includes three new devices namely Honor 30, 30 Pro and 30 Pro+. Now the electronics giant is planning to introduce a new smartphone series called Huawei Nova 7 series on April 23. The company officially confirmed the launch date via Chinese micro-blogging website, Weibo. However, the teaser image did not carry any specific information related to the specifications and features. It is rumoured to include three devices Huawei Nova 7 SE, Nova 7, and Nova 7 Pro. But at the moment the smartphones to be included in the series are still unclear.

In the meanwhile, a promo poster of the Huawei Nova 7 series has now surfaced on the web that has revealed the form factor of the upcoming devices. As per the alleged poster, the upcoming series will include a vertically placed quad rear camera set up at the upper left corner along with an LED flash as well as a periscope zoom lens that supports up to 50x digital zoom. Furthermore, it revealed that the device will be powered by the company’s latest 7nm Kirin 985 chipset clocked at 2.58GHz that will be found on the just arrived Honor 30 series.

The leaked poster further showcases the Nova 7 featuring a curved display with a dual punch-hole on the top left corner. Looking at the alleged poster image the handset is expected to come in three colour options red, purple and gradient white. Also, it will be supported by 40W fast charging support.

As per the previous reports, the upcoming series will support 5G connectivity. The Huawei Nova 7 and Huawei Nova 7 Pro are tipped to draw its power from Kirin 820 SoC and Kirin 990 SoC respectively. Also, both the mobile phones will have 40W fast charging support.

Komila Singhhttp://www.gadgetbridge.com
Komila is a one of the most spirited tech writers at Gadget Bridge. Always up for a new challenge, she is an expert at dissecting technology and getting to its core. She loves to tinker with new mobile phones, tablets and headphones.
Facebook
Twitter
WhatsApp
Linkedin
ReddIt
Email
Previous articleSamsung Galaxy M31 review: The big-battery wonder
Next articleZoom introduces 5 significant changes to secure its meetings and webinars

Redmi Note 10S gets listed on Amazon ahead of the launch, teases availability and key specifications

Komila Singh - May 10, 2021 0
The Chinese smartphone brand, Xiaomi, is all set to launch its budget gaming smartphone Redmi Note 10S in the Indian market. The device is...

May 10 Amazon Quiz: Answer these five questions and you could...