The device comes with a 5,000mAh battery 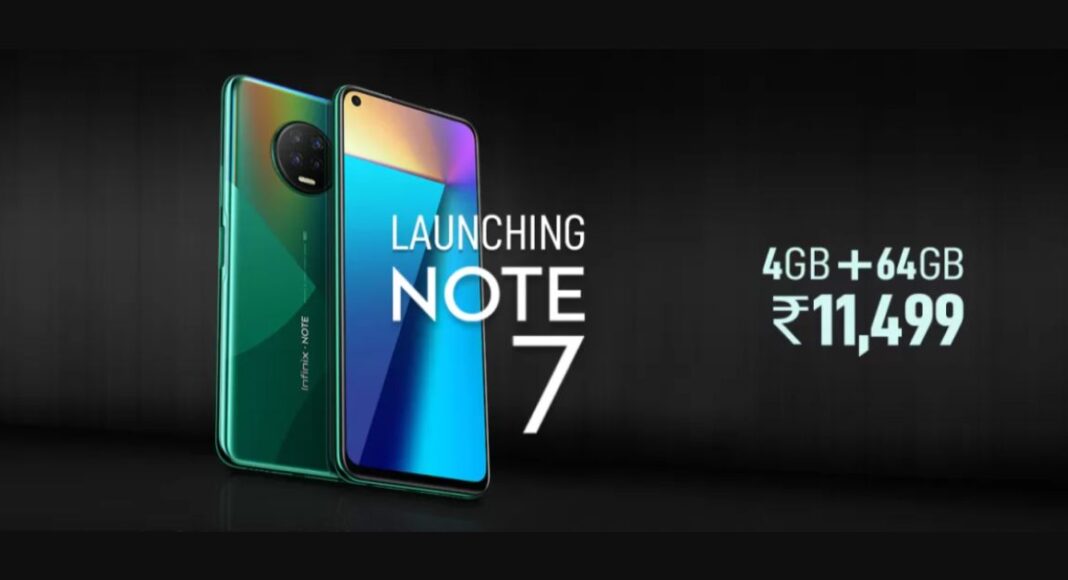 Transsion Holdings group today announced the launch of its new smartphone in the Indian market. The company has introduced its new mid-ranger in the country named Infinix Note 7. The device is the successor of Note 5 which already arrived in other regions before hitting the stores in India. The device is powered by MediaTek G70 SoC, 48-megapixel quad rear camera set up with a 5,000mAh battery onboard. The device will be available on the e-commerce website Flipkart.

Infinix Note 7 has been introduced in India with a price tag of Rs 11,499 in India for the single 4GB of RAM with 64GB of storage. The device will be available in three colour options Aether Black, Bolivia Blue, and Forest Green. The smartphone is scheduled to go on sale in the country via e-commerce website Flipkart starting September 22. The sale will commence from 12 noon onwards.

The launch offers for the phone include 5 percent cashback on Flipkart Axis Bank credit card transactions along with a 5 percent discount on Axis Bank Buzz credit cards. There will be no-cost EMI options available on the purchase of the smartphone.

Infinix Note 7 features a hole punch design 6.95-inch HD+ IPS LCD Infinity-O display offering 720 x 1,640 pixels of resolution with a 20.5:9 aspect ratio and 480 nits peak brightness. Under the hood, there is an octa-core MediaTek Helio G70 processor, which is paired with 6GB of RAM and 128GB of internal storage which can be expanded using a microSD card. Mali-G52 GPU for graphics. The internal storage can be expanded up to 256GB using a microSD card. It runs on XOS 6.0 UI baked on top of Android 10 OS.

Moving on to the camera, the Infinix Note 7 sports a quad rear camera set up that includes a 48-megapixel primary camera with f/1.79 aperture, a 2megapixel macro camera, a 2megapixel depth sensor, and a low-light video camera. While on the front there is a 16-megapixel selfie camera on the display at the top left corner.

Moreover, it houses a side-mounted fingerprint scanner and a 5,000mAh battery supported by an 18W fast charger. The connectivity option on the phone includes 4G LTE, Wi-Fi 802.11ac, Bluetooth, GPS/ A-GPS, Micro-USB, and a 3.5mm headphone jack. For sensors, there is an accelerometer, ambient light, magnetometer, and a proximity sensor.

Komila Singhhttp://www.gadgetbridge.com
Komila is one of the most spirited tech writers at Gadget Bridge. Always up for a new challenge, she is an expert at dissecting technology and getting to its core. She loves to tinker with new mobile phones, tablets and headphones.
Facebook
Twitter
WhatsApp
Linkedin
ReddIt
Email
Previous article
Samsung Galaxy M31s review: A battery that lastsssss
Next article
Fujifilm launches its instax SQUARE SQ1 Instant Camera for Rs 10,999