The non-pro variant of the smartphone was also released in India last month. 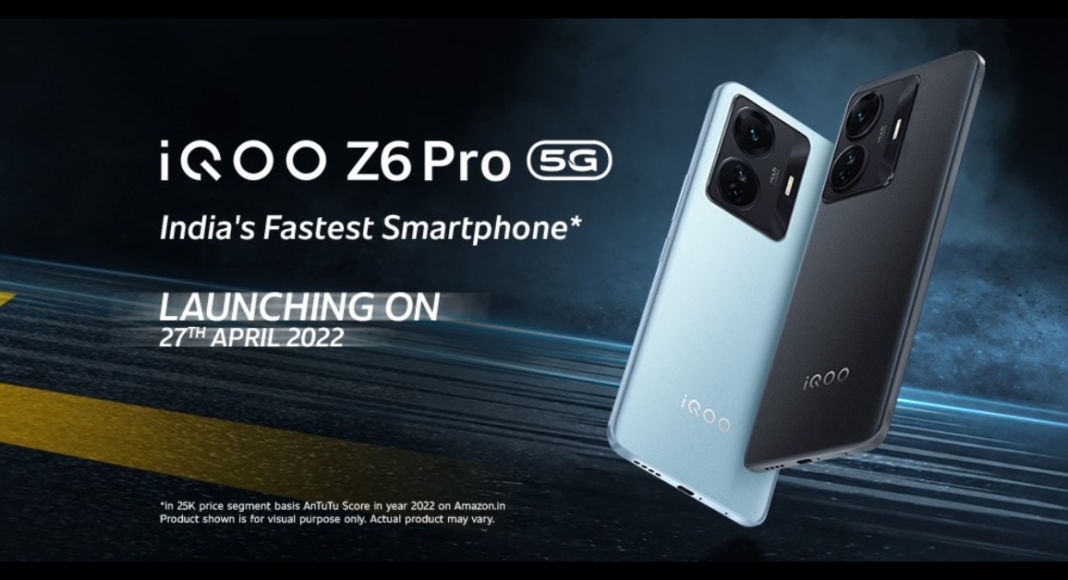 Vivo’s sub-brand iQoo is all set to launch a new smartphone in the Indian market today. The company will be announcing the iQoo Z6 Pro 5G which is going to be a sibling of the iQoo Z6 5G that was launched last month. The mid-range smartphone will be presented through Amazon and has been listed on the e-commerce platform ahead of the official announcement.

Today is the official launch of the iQoo Z6 Pro in India. It will be an online launch event that will start at 11:30 AM IST. The event will be broadcast live on iQoo India’s YouTube channel and social media accounts.

Few hours for the #iQOOZ6Pro5G & #iQOOZ644W to launch into the hearts & minds of millions. We have 2 amazing hosts to launch these amazing smartphones, here’s Rahul Subramanian & @knowkenny bringing you the #FullyLoaded #iQOOZ6Pro5G at 11:30AM on – https://t.co/09ZZX0Io4u#iQOO pic.twitter.com/51Ndo5cY9t

In addition, Amazon has confirmed that the Z6 Pro 5G will be available in the country. The company has also hinted at the price of the smartphone ahead of the official announcement. The price of the iQOO Z6 Pro 5G is expected to be under Rs 25,000.

Last month, iQOO launched the iQOO Z6 5G in the country, which is a non-Pro model. It was released with a starting price of Rs 15,999 and a price range of Rs 17,999. Chromatic Blue and Dynamo Black are the two colour options for the phone.

The Z6 Pro 5G was recently seen in a hands-on video. The upcoming smartphone appears to have an OLED display with a refresh rate of 90Hz and a peak brightness of 1,300 nits. The Snapdragon 778G SoC will be used, along with Qualcomm’s VC liquid cooling technology. A 64-megapixel primary camera, an 8-megapixel ultra-wide camera, and an unspecified macro camera are also expected to be included in the handset. The smartphone appears to have a USB Type-C port but no headphone jack, according to the hands-on video. Whereas the iQoo Z6 Pro 5G’s battery capacity has yet to be disclosed but it has been confirmed that the device will support 66W FlashCharge.

In a recent hands-on video, the handset was shown. The upcoming smartphone appears to have a 90Hz OLED display with a peak brightness of 1,300 nits. Qualcomm’s VC liquid cooling technology, as well as the Snapdragon 778G SoC, will be used. The handset is also expected to come with a 64-megapixel primary camera, an 8-megapixel ultra-wide camera, and an unspecified macro camera. According to the hands-on video, the smartphone only has a USB Type-C port and no headphone jack. The battery capacity of the iQoo Z6 Pro 5G has yet to be revealed, but the device will support 66W FlashCharge.

Komila Singhhttp://www.gadgetbridge.com
Komila is one of the most spirited tech writers at Gadget Bridge. Always up for a new challenge, she is an expert at dissecting technology and getting to its core. She loves to tinker with new mobile phones, tablets and headphones.
Facebook
Twitter
WhatsApp
Linkedin
ReddIt
Email
Previous article
Xiaomi 12 Pro alongside Pad 5 tablet launching today in India: Livestream details
Next article
Samsung Galaxy Tab A8 Review: The best in class tablet