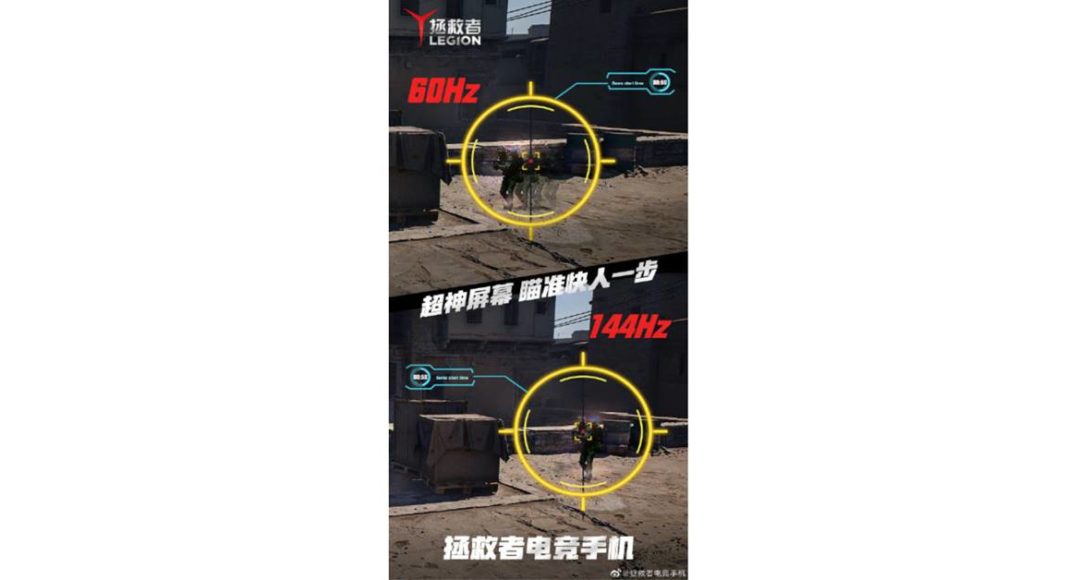 Ahead of the July 22 launch of much-anticipated Lenovo Legion, Lenovo has now teased that this gaming phone will be equipped with 144Hz display in order to enhance gaming animations. It seems that with this high refresh rate, Lenovo is aiming to provide a seamless gaming experience.

This new leaked image has been shared on Weibo through Lenovo Legion Gaming Phone account on this Chinese social media handle. Mind you! The picture tries to provide a comparison between the 60Hz refresh rate and 144Hz refresh rate to let viewers know which is smoother.

Earlier Lenovo has revealed that its “Legion Gaming Phone” will come with dual X-axis linear motor. At the same time, another news a report by benchmarking firm AnTuTu on Weibo has revealed the model number of this much-anticipated device by Lenovo is L79031 and it would likely be rescuer gaming phone. In terms of running score, Lenovo Legion gaming phone gets a total score of 648871 points, which including a CPU score of 187401, a GPU score of 246980, a MEM score of 114314 and a UX score of 100176.

In terms of configuration, AnTuTu revealed on Weibo that Lenovo Legion gaming phone is likely to be equipped with a 2340×1080 resolution display along with built-in 16GB RAM and a storage capacity of 512GB that is quite high. Furthermore the running scores revealed that Lenovo Legion should be equipped with LPDDR5 memory and UFS 3.1 flash memory, and its performance is currently very outstanding. The reason why the UX performance is good should be the use of high refresh rate screens, Antutu speculates that its screen refresh rate should reach 144Hz.

The upcoming gaming device is equipped with a high-frequency version of Snapdragon 865, which has a main frequency of 3.09GHz. Now, this has been officially confirmed that Lenovo Legion 5G gaming phone will be powered by Qualcomm Snapdragon 865 Plus.

Stating that innovating smarter, faster technology for higher performance and more immersive gameplay has always been a hallmark of Lenovo Legion, Jerry Tsao, vice president of Lenovo’s Mobile Gaming Group, said, “Three years after the launch of the Lenovo Legion PC portfolio, we’re bringing our beloved gaming sub-brand’s core values of speed and powerful performance to 5G mobile gaming – where Lenovo Legion will be amongst the first to offer the new Snapdragon 865 Plus in our expanding family of gaming devices this year.”

Recently, the Legion gaming phone also released a prank unpacking video to showcase packaging style. However, there was a Lenovo Z6 Pro inside the box other than this upcoming gaming phone. The smartphone will also sport temperature control sensors along with two USB-C ports.