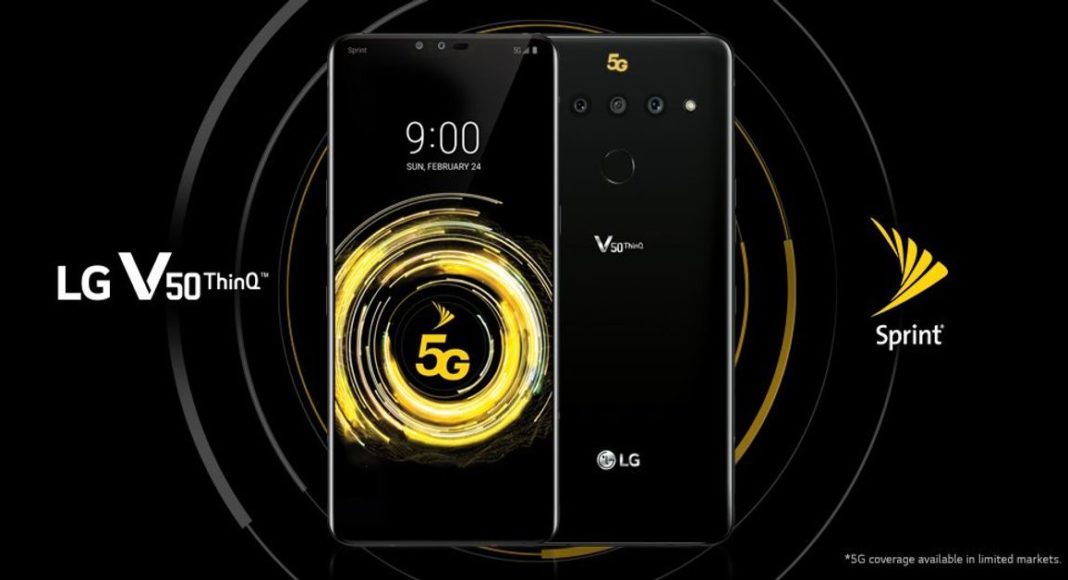 As of now, there is no word on the pricing of the LG V50 ThinQ smartphone, however, it was said that the event that the device will be available “later this year.”

The LG V50 ThinQ sports a 6.4-inch Quad HD+ OLED FullVision Display that has an aspect ratio of 19:5:9 and a pixel density of 538ppi. The LG V50 ThinQ will support dual SIM cards (Nano + Nano) and runs Android 9 Pie. As we mentioned earlier, LG also launched secondary screen accessory along with the smartphone that looks like a flip-cover and will add a secondary display to the handset. It has a 6.2-inch Full HD+ OLED display with three Pogo pin connectors that enable it to be attached to the smartphone. It doesn’t have a battery of its own and will be powered by LG V50 ThinQ’s battery.

LG V50 ThinQ is powered by Snapdragon 855 SoC CPU paired with Snapdragon X50 modem which is capable of supporting 5G connectivity. The device has Adreno 640 GPU that controls all its graphics processing operations and it comes with a triple-rear camera setup with a 12-MP primary sensor with 78-degree telephoto lens with f/1.5 aperture, a 12MP 45-degree telephoto lens of f/2.4 ,a 16MP 107-degree wide-angle lens of f/1.9 aperture. For selfies and video calls, there is a dual camera setup of an 8MP RGB sensor of f/1.9 aperture and a 5MP 90-degree wide-angle lens of f/2.2 aperture. It has 6GB of RAM along with 128GB of storage, and can hold a microSD card of up to 2TB.

Unreal speed is coming with the #LGV50ThinQ 5G. The next generation is closer than you think. https://t.co/untZU6DGxg pic.twitter.com/yjKIzSWpRc

The LG V50 ThinQ comes with 3G, 4G LTE-A and 5G connectivity along with Bluetooth 5.0, NFC and Wi-Fi. It has a USB Type-C port and houses a 4,000mAh battery which has support for Quick Charge3.0. Being a flagship smartphone, it comes with IP68 rating which makes it water and dust resistant and it also has a certification from MIL-STD 810G . In the audio department, the smartphone has full-range BoomBox stereo speakers along with 32-bit Hi-Fi Quad DAC and DTS:X 3D surround sound support. The list of audio specifications of V50 ThinQ doesn’t end there as it comes with Qualcomm aptX and aptX HD audio technology for better audio experience over wireless audio accessories.

Aman Singhhttps://www.gadgetbridge.com/
Aman Kumar Singh has a Masters in Journalism and Mass Communication. He is a journalist, a photographer, a writer, a gamer, a movie addict and has a love for reading (everything). It’s his love of reading that has brought him knowledge in various fields including technology and gadgets. Talking about which, he loves to tweak and play with gadgets, new and old. And when he finds time, if he finds time, he can be seen playing video games or taking a new gadget for a test run.
Facebook
Twitter
WhatsApp
Linkedin
ReddIt
Email
Previous articleHMD Global launches Nokia 3.2 and Nokia 4.2 at MWC 2019: Price and specifications
Next articleHMD global launches Nokia 1 Plus, Nokia 210 feature phone at MWC 2019: Price and specifications