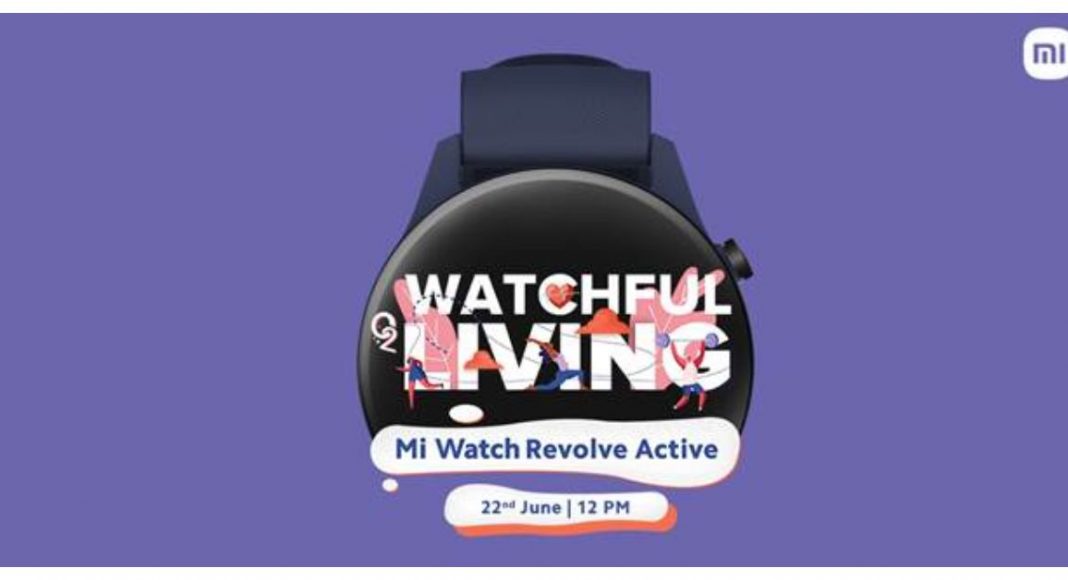 Xiaomi recently announced the launch of Mi 11 Lite in India on June 22. Today the company has also confirmed to introduce the Mi Watch Revolve Active in the country on the same day. The wearable is the follow up of the Mi Watch Revolve that was launched in India last year. The upcoming watch will be featuring a blood oxygen saturation (SpO2) monitor which is an essential feature to rule out the COVID symptoms.

The Chinese smartphone company Xiaomi has officially announced to launch its next iteration of Mi Watch Revolve in India this month. The company has revealed that Mi Watch Revolve Active will make its debut on June 22 at 12 noon. The upcoming device has also been listed on its e-commerce portal as well as on Amazon to tease its availability. The microsite has also revealed the key specs of the smartphone.

While announcing the launch the company said, “Mi India is geared up to bring the era of choosing health over everything. Our mantras guide us to live mindfully and consciously, root for happier minds and healthier bodies, and always getting more from life. Block your date for #WatchfulLiving with #MiWatchRevolveActive on June 22nd at 12 PM. Stay tuned to our social media channels for more updates.”

As per the listing, the Mi Watch Revolve Active will have built-in GPS, Glonass, Galileo and BDS as connectivity options. The device will further include a blood oxygen saturation (SpO2) monitor, VO2 Max, Body Energy Monitor and HR Monitor. The smartwatch is listed to offer maximum sports mode. In addition to this, there will be sleep management features onboard as well as a sleep monitor. Besides all this, the Mi smartwatch will be Amazon Alexa enabled for voice control and will offer other features like calls, app notification and more.

On the other hand on the same day of the launch of Mi Watch Revolve Active, Xiaomi is also going to unveil Mi 11 Lite in India. The device was introduced in China in March this year.

Mi 11 Lite will be offering a 90Hz 6.55-inch full-HD+ AMOLED display. It runs MIUI 12 on top of Android 11 and will be powered by the Qualcomm Snapdragon 732G SoC. For the photos and videos, it will include a triple rear camera set up that would include a 64-megapixel primary sensor with an f/1.79 aperture. Further assisted by an 8-megapixel ultra-wide-angle lens with f/2.2 and a 5-megapixel tele-macro camera with f/2.4 aperture. For taking photos and videos there is a 16-megapixel front-facing camera with an f/2.45 aperture. Moreover, the smartphone will be backed by a 4,250mAh battery that supports 33W fast charging.

Komila Singhhttp://www.gadgetbridge.com
Komila is one of the most spirited tech writers at Gadget Bridge. Always up for a new challenge, she is an expert at dissecting technology and getting to its core. She loves to tinker with new mobile phones, tablets and headphones.
Facebook
Twitter
WhatsApp
Linkedin
ReddIt
Email
Previous article
How to update the Google Play Store app?
Next article
How to do WhatsApp video calls on the web?