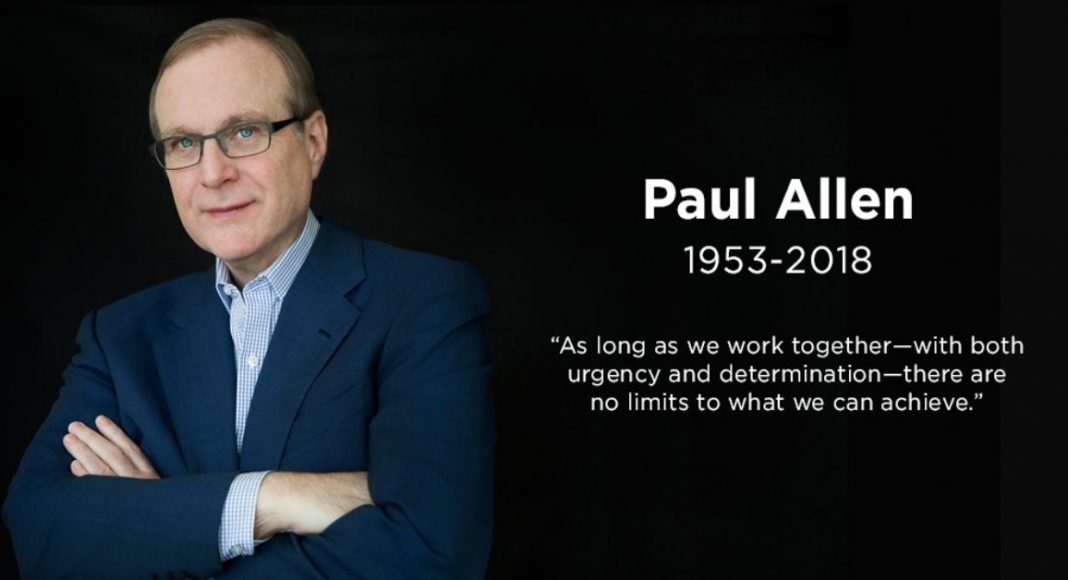 Microsoft co-founder Paul Allen died due to complications of non-Hodgkin’s lymphoma today. He was 65 and had confirmed earlier this month that he was undergoing treatment for the disease.

Paul Allen was Bill Gates’ friend since childhood and started Microsoft with him in 1975. In 1983, he left the company while he was being treated for Hodgkin’s lymphoma, but he stayed on the company’s board through 2000. He was treated for the condition in 2009, but later the disease relapsed.

Gates have given a statement to ABC News saying that he is “heartbroken by the passing of one of my oldest and dearest friends.” He further went on to say that, “From our early days together at Lakeside School, through our partnership in the creation of Microsoft, to some of our joint philanthropic projects over the years, Paul was a true partner and dear friend. Personal computing would not have existed without him. But Paul wasn’t content with starting one company. He channelled his intellect and compassion into a second act focused on improving people’s lives and strengthening communities in Seattle and around the world. He was fond of saying, ‘If it has the potential to do good, then we should do it.’ That’s the kind of person he was. Paul loved life and those around him, and we all cherished him in return. He deserved much more time, but his contributions to the world of technology and philanthropy will live on for generations to come. I will miss him tremendously.”

Microsoft’s CEO Satya Nadella also spoke about Allen saying that his contribution to Microsoft and to the industry was ‘indispensable.’ He said in a statement that, “Paul Allen’s contributions to our company, our industry, and to our community are indispensable. As co-founder of Microsoft, in his own quiet and persistent way, he created magical products, experiences and institutions, and in doing so, he changed the world. I have learned so much from him — his inquisitiveness, curiosity, and push for high standards is something that will continue to inspire me and all of us as Microsoft. Our hearts are with Paul’s family and loved ones. Rest in peace.”

Statement from Microsoft CEO Satya Nadella on the passing of Paul Allen: pic.twitter.com/1iLDLenLKz

In 2011, a memoir was published in which Allen revealed that he was the mind behind naming Microsoft and it was him who created the two-button mouse. According to the book, Allen was under-credited for the work he did at Microsoft and Bill Gates took more ownership of the technology giant than he deserved. Although the book initially did create some stir, two years later, Gates and Allen posed for a photo together and confirmed that they were still friends.

After Allen left Microsoft, he became an investor through his company Vulcan and started putting his money in a number of companies. A lot of Allen’s work was focused in Seattle, where he became a big name because of his investments and donations.

CEOs of other technology companies including Apple, Google and Amazon spoke about Allen on Twitter after the news of his demise came in.

Our industry has lost a pioneer and our world has lost a force for good. We send our deepest condolences to Paul’s friends, the Allen family and everyone at Microsoft.

We lost a great technology pioneer today – thank you Paul Allen for your immense contributions to the world through your work and your philanthropy. Thoughts are with his family and the entire Microsoft community.

Very sad to hear of Paul Allen’s passing. His passion for invention and pushing forward inspired so many. He was relentless to the end. My heart goes out to Paul’s family and friends.

Avani Baggahttp://www.gadgetbridge.com
Avani has an immense love for reading, travelling and food, but not necessarily in the same order. Avani almost started pursuing law, but life had other (better) plans for her and she chose to be a writer instead (luckily!) She previously covered technology at Times Internet and wrote about smartphones, mobile apps and tech startups. When she’s not writing, you’ll be able to find her in book stores or catching up on her social life.
Facebook
Twitter
WhatsApp
Linkedin
ReddIt
Email
Previous articleCoolpad Note 8 with 4,000mAh battery launched in India: Price, specifications and more
Next articleHonor 8X with 6GB RAM, Huawei’s HiSilicon Kirin 710 processor launched in India: Price, specifications and more