Scientists describe Phobos as ‘the best studied natural satellite in the solar system’. 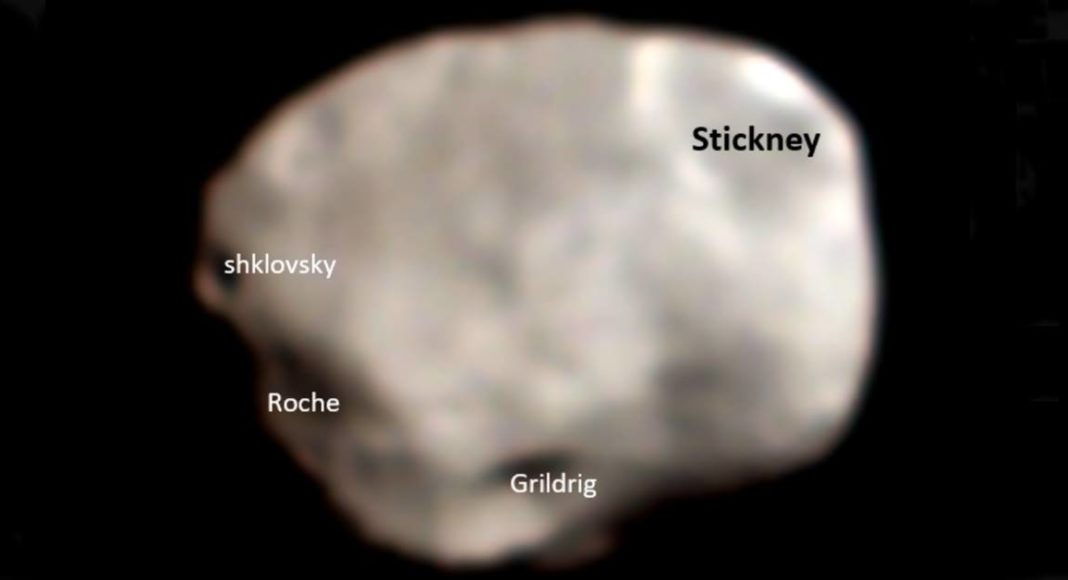 When on July 1 the Indian Space Research Organisation’s Mars Orbiter Mission (MoM) aka Mangalyaan was about 7,200 km from Mars and at 4,200 km from Phobos, Mars Colour Camera (MCC) on-board this orbiter has imaged Phobos that is the closest and biggest moon of Mars. The spatial resolution of the image is 210 m. It is a composite image generated from 6 MCC frames. Mangalyaan was sent to the Red Planet as a part of ISRO’S Mission Mars.

According to ISRO, “Phobos is largely believed to be made up of carbonaceous chondrites. The violent phase that Phobos has encountered is seen in the large section gouged out from a past collision (Stickney crater) and bouncing ejecta. Stickney, the largest crater on Phobos along with the other craters (Shklovsky, Roche & Grildrig) are also seen in this image.”

Phobos was discovered by astronomer Asaph Hall on 18 August 1877, at the United States Naval Observatory in Washington DC. This moon has a size of 27 x 22 x 18 km in diameter and orbits Mars three times a day at an unbelievable speed of just 7 hours and 39 minutes. Sometimes, it’s so close to the Red Planet’s surface that it can’t even be seen. Scientists describe Phobos as ‘the best studied natural satellite in the solar system’.

The Mangalyaan is a space probe orbiting Mars since 24 September 2014. It was launched on 5 November 2013 by ISRO. It is India’s first interplanetary mission and it made it the fourth space agency to reach Mars, after Roscosmos, NASA, and the European Space Agency. It made India the first Asian nation to reach Martian orbit and the first nation in the world to do so on its maiden attempt.

The Mars Orbiter Mission probe lifted-off from the First Launch Pad at Satish Dhawan Space Centre (Sriharikota Range SHAR), Andhra Pradesh, using a Polar Satellite Launch Vehicle (PSLV) rocket C25 at 09:08 UTC on 5 November 2013. The launch window was approximately 20 days long and started on 28 October 2013. The MOM probe spent about a month in Earth orbit, where it made a series of seven apogee-raising orbital manoeuvres before trans-Mars injection on 30 November 2013 (UTC). After a 298-day transit to Mars, it was put into Mars orbit on 24 September 2014.