HomeMobilesMoto G52 launching in India on April 25, gets listed on Flipkart

Moto G52 launching in India on April 25, gets listed on Flipkart

The phone was recently launched in the European market. 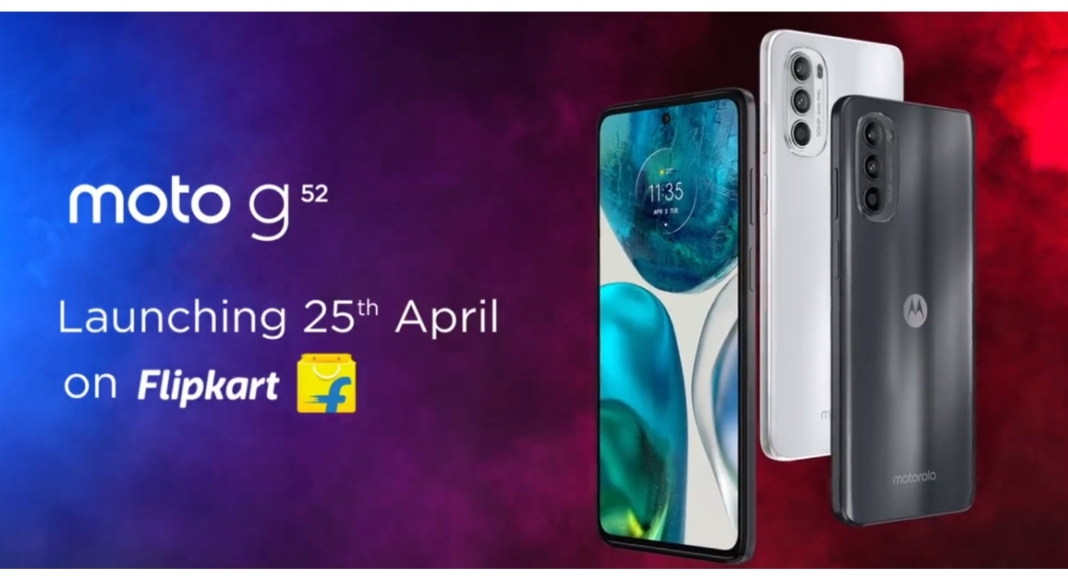 The Moto G52 will be available in India on April 25. Motorola has officially confirmed the arrival of its upcoming smartphone through official teasers. Moto G52 recently made its debut in Europe. The company has also created a dedicated microsite on Flipkart to tease its availability. The phone will come with a hole-punch display with a refresh rate of 90Hz. Qualcomm’s Snapdragon 680 SoC powers it.

According to a teaser video shared on Twitter by Motorola, the Moto G52 will be released on April 25 in India. The exact timing and other launch detail are currently unknown. Customers who are interested in staying informed about the product’s launch and availability can use the website’s “Notify Me” button as the handset has also been listed on the e-commerce platform Flipkart.

The device’s price in India is expected to be comparable to that in Europe. In case you forgot, the Moto G52 was launched in Europe. There it was produced at EUR 249 which translates to Rs 20,600 for the single 4GB RAM with 128GB storage option. The smartphone comes in two colour schemes: Charcoal Grey and Porcelain White.

Most of the Moto G52’s specifications are likely to be the same in India as they are in Europe. The Moto G52 will have a full-HD+ pOLED display with a 90Hz refresh rate, according to the Flipkart listing. Furthermore, the microsite also reveals a fingerprint sensor located on the phone’s side.

The Moto G52 is available in Europe and comes with a 6.6-inch full-HD+ having 1,080×2,400 pixels of resolution and a 90Hz refresh rate. The device is powered by Qualcomm Snapdragon 680 SoC as well as an Adreno 610 GPU and 4GB of RAM with 128GB of internal storage that can be expanded with a microSD card up to 1TB.

The phone has a triple rear camera system, with a 50-megapixel primary sensor at its centre. An 8-megapixel ultra-wide-angle depth sensor and a 2-megapixel macro sensor are also included in the camera unit. The Moto G52 has a 16-megapixel front-facing camera for selfies and video chats.

Moto G52 comes with a 5,000mAh battery and a charger that supports 30W TurboPower Charging.

Komila Singhhttp://www.gadgetbridge.com
Komila is one of the most spirited tech writers at Gadget Bridge. Always up for a new challenge, she is an expert at dissecting technology and getting to its core. She loves to tinker with new mobile phones, tablets and headphones.
Facebook
Twitter
WhatsApp
Linkedin
ReddIt
Email
Previous articleWhatsApp has finally given some beta testers access to advanced settings for managing your Last Seen
Next articleSummer Gadgets 2022: Top 10 Gadgets To Keep Yourself Cool This Summer