Moto G9 Power set to launch in India today: Here is what you can expect

The device comes with a massive 6,000mAh battery that lasts for 60 hours on a single charge 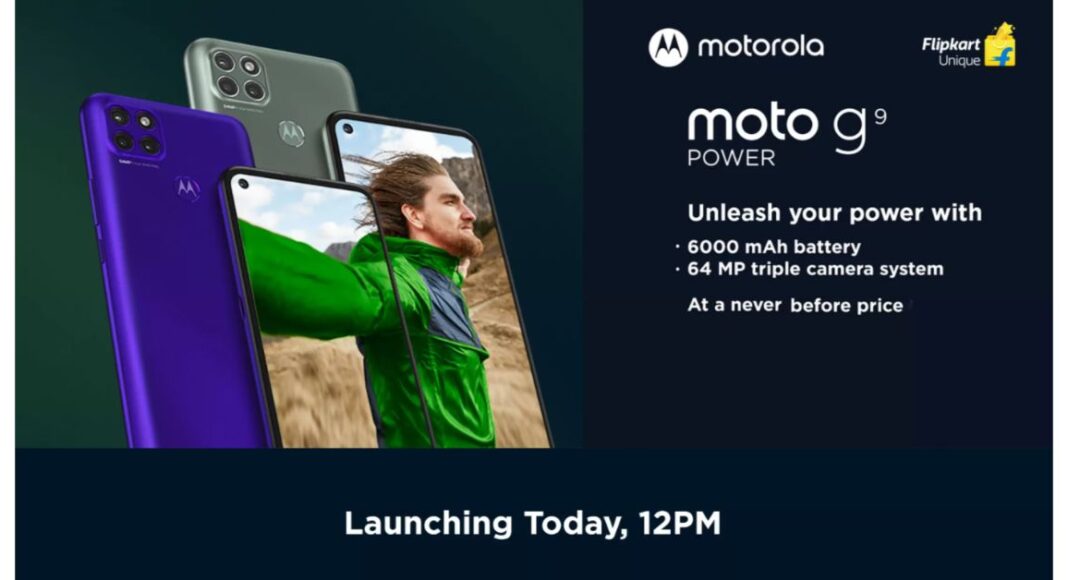 Moto G9 Power is officially going to make its debut in the Indian market today. The device is going to launch in the country at 12 PM noon. Prior to coming to India, the Motorola smartphone has already been released in Europe so we are already aware of what to expect in terms of pricing as well as specification. The key highlights of the smartphone include a 6,000mAh battery, a hole-punch design display and a triple rear camera. The device is powered by Qualcomm Snapdragon 662 SoC.

Motorola’s popular G series already includes Moto G9, Moto G9 Plus, and Moto G9 Play. Today the company is going to expand its family by launching Moto G9 Power in India. The device will launch in the country today at 12 noon. Whereas the dedicated microsite on Flipkart confirms the availability of the device.

The pricing of the Motorola Moto G9 Power will be disclosed at the time of the launch only but here in the country, it will be available for purchase at cheaper pricing than the European pricing. In Europe, the device is priced at EUR 199 that translates to Rs 17,400 for the single 4GB of RAM with 128GB of storage option. It is expected to be available in two colour options Electric Violet and Metallic Sage.

The Motorola Moto G9 Power features a 6.8-inch HD+ IPS display with a resolution of 720×1,640 pixels. The Motorola smartphone runs on the stock Android 10 operating system and is powered by Qualcomm Snapdragon 662 SoC paired with 4GB RAM with 128GB of storage option. The storage can be expanded up to 512 GB with the use of a microSD card.

In addition to this, Motorola Moto G9 Power houses a 6,000mAh battery that offers 20W fast charging support. According to the company on a single charge, the battery can last for 60 hours. There is Wi-Fi 802.11 ac, Bluetooth v5, NFC, USB Type-C, 3.5mm audio jack, and 4G LTE as connectivity options.

Komila Singhhttp://www.gadgetbridge.com
Komila is one of the most spirited tech writers at Gadget Bridge. Always up for a new challenge, she is an expert at dissecting technology and getting to its core. She loves to tinker with new mobile phones, tablets and headphones.
Facebook
Twitter
WhatsApp
Linkedin
ReddIt
Email
Previous article
December 8 Amazon Quiz: Answer all the questions to win All-new Echo (4th Gen)
Next article
Vivo Y52s with 5,000mAh battery and a 90Hz refresh rate display launched