With the OnePlus TV 65 Q2 Pro, OnePlus will expand the reach of its IoT-connected ecosystem in India. 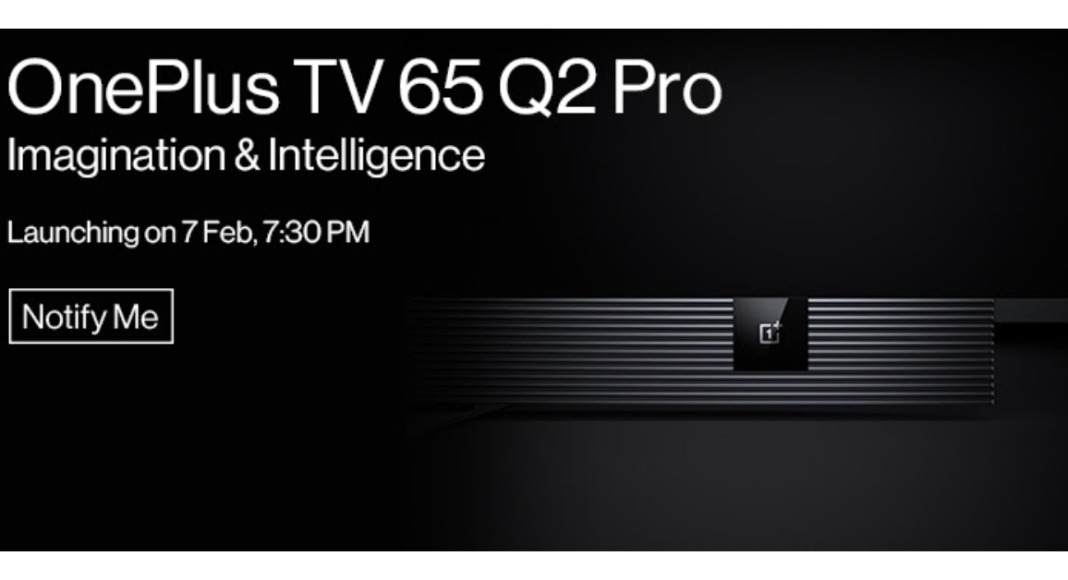 At the OnePlus Cloud 11 Event On February 7 the Chinese tech firm is going to present a couple of products including the OnePlus 11 5G, Buds Pro 2 and the OnePlus Keyboard. The company is also planning to expand its Smart TV portfolio with the launch of its premium TV called the OnePlus TV 65 Q2 Pro at the same event.

The company via its announcement said, “The new OnePlus TV serves as an extension of the premium Q Series portfolio which debuted in 2019, with the launch of the OnePlus TV Q1 and Q1 Pro. The product is set to be unveiled along with OnePlus 11 and OnePlus Buds Pro 2 on 7th February 2023 at the Cloud 11 launch event in Delhi.” OnePlus further added, “The OnePlus TV Q series symbolises the brand’s efforts to bring industry-leading technology with premium visual and sound features to users in India. The OnePlus TV 65 Q2 Pro is expected to make a significant leap towards these efforts.”

The new OnePlus TV 65 Q2 Pro is planned to offer a number of superior hardware and software features and act as the centre of a more upscale, smarter connected ecosystem, according to the firm. The Television is expected to be available for purchase via Amazon in the country.

To recall, OnePlus forayed into the TV industry with the launch of OnePlus TV Q1 Pro and OnePlus TV Q1 in India in 2019. Both TVs offer a 55-inch 4K display with a QLED panel. The televisions have Dolby Atmos, Dolby Vision, and HDR10+ capabilities. It is important to note that the OnePlus TV Q1 Pro includes a motorised soundbar that extends from the unit downward. The TV’s soundbar includes 8 speakers with a 50W total sound output. Four of the speakers are facing forward, while two are facing back. The devices have built-in casting and a very plain-looking remote control with a limited number of buttons that comes with them. However, it contains dedicated buttons for frequently used services like Google Assistant, Amazon Prime Video, and others.

Komila Singhhttp://www.gadgetbridge.com
Komila is one of the most spirited tech writers at Gadget Bridge. Always up for a new challenge, she is an expert at dissecting technology and getting to its core. She loves to tinker with new mobile phones, tablets and headphones.
Facebook
Twitter
WhatsApp
Linkedin
ReddIt
Email
Previous article
How to easily create a custom Apple Watch Face?
Next article
OnePlus 11R 5G India launch to take place on February 7 at Cloud 11 event