Oppo Reno 6 Series to debut in India on July 14 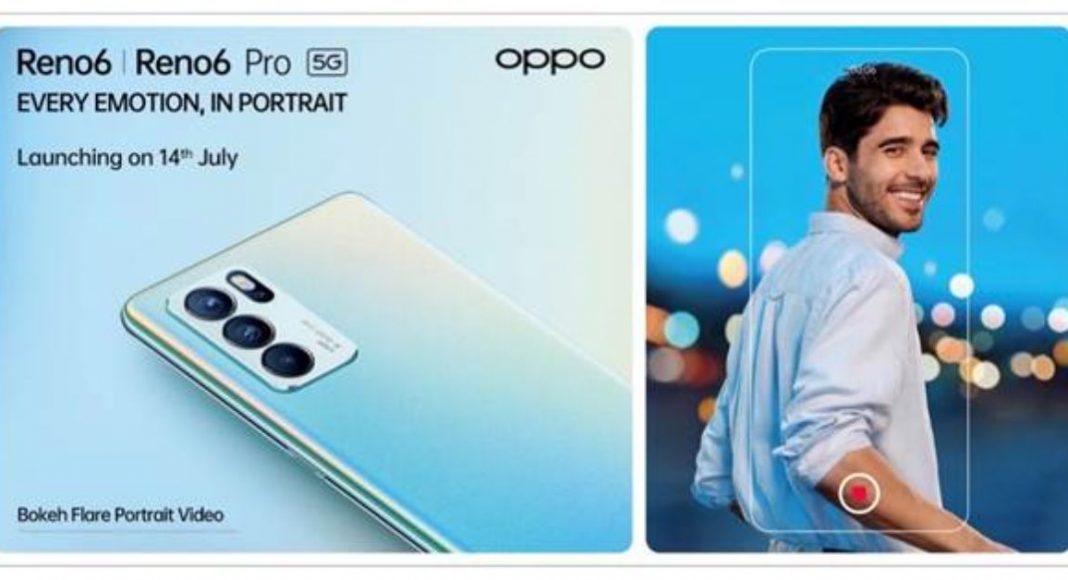 The Chinese smartphone company Oppo today announced that on July 14 it is going to launch Oppo Reno 6 Series in India. The new series consists of two phones Oppo Reno 6 Pro 5G and Reno 6 5G. Both the phones debuted in China in May this year. The smartphones come with 65W fast charging support and are powered by MediaTek SoCs and multiple cameras set up.

Just ahead of the official launch the company has listed the Oppo Reno 6 5G series on Flipkart for its availability. The listing also highlights some of the key specs of the upcoming Reno smartphones. As we are already aware of its specification, the company is going to officially reveal the pricing on the launch day only. The handset is set to debut on July 14 at 3 PM IST.

Oppo Reno 6 was launched in China featuring a 90Hz 6.43-inch full-HD+ hole-punch AMOLED display. The phone ships with ColorOS 11 based on top of Android 11 out of the box. Under the hood, there is a MediaTek Dimensity 900 SoC, paired with up to 12GB RAM and up to 25GB storage.

Oppo Reno 6 Pro 5G features a bigger 90Hz 6.55-inch full-HD+ OLED display. Powered by MediaTek Dimensity 1200 SoC the Pro variant comes with up to 12GB of RAM and up to 256GB storage option. In terms of imaging, the phone consists of a quad rear camera setup that includes a 64-megapixel primary sensor. Further assisted by an 8-megapixel secondary camera, and dual 2-megapixel sensors. The selfie sensor is the same as above. There is a 4,500mAh battery on board with 65W fast charging support.

Komila Singhhttp://www.gadgetbridge.com
Komila is one of the most spirited tech writers at Gadget Bridge. Always up for a new challenge, she is an expert at dissecting technology and getting to its core. She loves to tinker with new mobile phones, tablets and headphones.
Facebook
Twitter
WhatsApp
Linkedin
ReddIt
Email
Previous articleSamsung Galaxy F22 with 90Hz HD+ display confirmed to launch in India on July 6
Next articleHow to delete OTP messages from your Android smartphones after 24 hours?