Home Mobiles Oppo set to launch Oppo A53 with Snapdragon 460 processor in India...

Oppo set to launch Oppo A53 with Snapdragon 460 processor in India on August 25: Launch details and specifications

The smartphone has just been launched in Indonesia 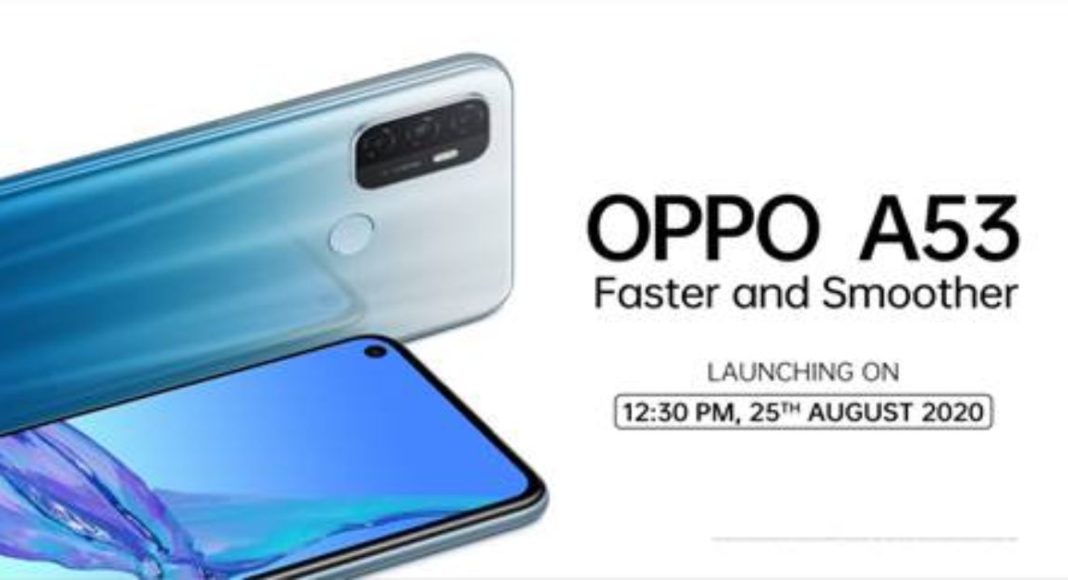 The Chinese smartphone company Oppo today officially announced to bring Oppo A53 in India soon. The device is set to launch on August 25 under the mid-range segment. The device is going to feature a 90Hz refresh rate screen. Also, the smartphone is powered by a Qualcomm Snapdragon 460 processor and a 5,000mAh battery. Read on to know more about the launch details.

Oppo is all geared up to unveil Oppo A53 in India. The company will be hosting an online launch event on August 25 to be live-streamed via its official YouTube channel that will begin at 12.30 onwards. Prior to its launch in India this device has just been introduced in the Indonesian market at IDR 2,499,000 that translates to Rs 12,700 for the 4GB RAM with 64GB storage. It is available in an Electric Black and Fancy Blue variants. According to Oppo, the phone will be available in India under Rs 15,000 price segment.

Though the company has not officially shared the details of the phone as it has already been introduced in Indonesia, we already know the specifications. The Oppo A53 comes with a 6.5-inch HD+ display with 1,600×720 pixels of resolution and 90Hz refresh rate, 20:9 aspect ratio as well. The smartphone runs on ColorOS 7.2 on top of Android 10. Under the hood, there is a Qualcomm Snapdragon 460 processor coupled with 4GB of Ram with 64GB of internal storage option. The memory can be expanded up to 256GB via using a microSD card.

In terms of imaging, there is a triple rear camera setup that includes a 16-megapixel primary sensor, a 2-megapixel secondary lens and another 2-megapixel tertiary sensor.  While on the front there is a16 megapixel selfie camera placed inside a hole-punch display.

The mobile phone comes with a 5,000mAh battery supported by an 18W fast charger. In addition to this for connectivity, there is 4G LTE, Wi-Fi, Bluetooth, GPS, 3.5mm audio jack, and a USB Type-C port. This device also features a fingerprint sensor on the back of the phone.

Komila Singhhttp://www.gadgetbridge.com
Komila is a one of the most spirited tech writers at Gadget Bridge. Always up for a new challenge, she is an expert at dissecting technology and getting to its core. She loves to tinker with new mobile phones, tablets and headphones.
Facebook
Twitter
WhatsApp
Linkedin
ReddIt
Email
Previous articleRealme X7 and Realme X7 Pro to arrive soon in India
Next articlePUBG Mobile New Era Announcement teased, to be live-streamed on August 24

Twitter recently revealed a new feature named 'Super Follow' that will enable the users to earn money from exclusive tweets and other content they...
Read more
Gadget Bridge Ace

How to get COVID-19 vaccine in India? How to register yourself on Co-WIN portal for vaccination: a complete guide

The process for the COVID-19 vaccine registration opens today for the general public in India. The registration for the vaccination has begun through the...
Read more

Top 5 professional tripods you can buy under Rs 3,000

Anurag Sharma - Feb 24, 2021 0
A Tripod stand is an essential gear for various purposes. If you are a traveler, YouTuber, or photographer, you can't click nice photographs or...