Realme Narzo 20 Series set to launch in India today: Here is how to watch the action live 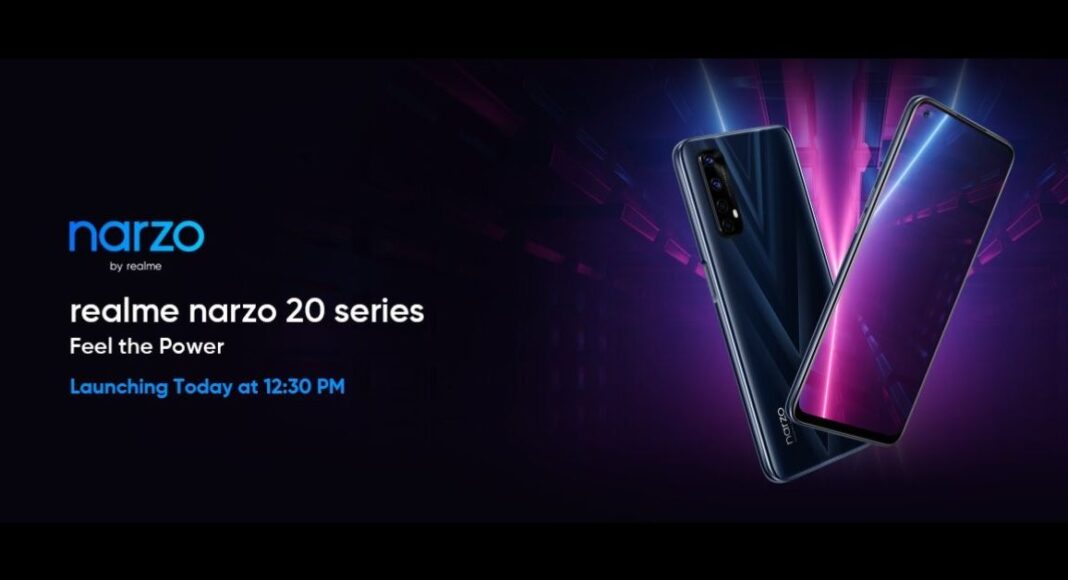 Realme Narzo 20 Pro, Realme Narzo 20A, and the Realme Narzo 20 will be launching in India today. The devices are the follow up to Realme Narzo 10 series that was introduced in May this year and in less than a year the company has come up with the all-new series for the Indian market. The Narzo 20 series were first teased by the company at the IFA Berlin 2020 and is expected to run Android 11-based Realme UI 2.0.

The Narzo 10 series consisted of two devices, a standard variant and Narzo 10A but this time the company has planned to launch three new devices Narzo 20, Pro variant and 20A. Narzo 20he launch will take place via virtual event today that will commence at 12.30 noon onwards. The event will be aired across all the social media channels including Twitter and Facebook via the company’s official YouTube channel.

Rumours suggest that Realme Narzo 20 Pro is expected to feature a 6.5-inch full-HD+ display with 1,080×2,400 pixels of resolution and 90Hz refresh rate support with 90.5 per cent. screen-to-body ratio. The device is likely to have a MediaTek Helio G95 SoC paired with 6GB of RAM with 64GB of storage and 8GB of RAM with 128GB of storage. The phone is said to be offered in two colour options Black Ninja and White Knight. For optics, the Pro variant is likely to include a quad rear camera setup consisting of a  48-megapixel primary sensor, an 8-megapixel ultra-wide lens, a 2-megapixel macro lens and a  2-megapixel black and white portrait lens. For selfies, there will be a 16-megapixel front-facing camera. Moreover, it should pack a 4,500mAh battery with 65W fast charging support.

On the other hand Realme Narzo 20A is said to be similar to the vanilla variant. It is said to include a 6.5-inch HD+ display with a resolution of 720×1,600 pixels, 89.8 percent screen to body ratio protected with Gorilla Glass layering. It is most likely to be powered by Qualcomm Snapdragon 665 SoC with 3GB of RAM with 32GB of storage and 4GB of RAM with 64GB of storage option that can be expanded with the help of microSD card. As per the leaked YouTube video the smartphone will run on Realme UI based on Android 10 and will be available in two colour options Glory Silver and Victory Blue. ‘For photos, 20A is suggested to include a triple rear camera setup having a 12-megapixel primary sensor, a 2-megapixel black and white lens and a 2-megapixel retro lens. On the front, it might include an 8-megapixel selfie camera.

Last but not the least Realme Narzo 20 is tipped to be powered by MediaTek Helio G85 SoC paired with 4GB of RAM with 64GB/128GB of storage options that can be further expanded via microSD card. The phone is speculated to come with a 6.5-inch HD+ display with 720×1,600 pixels of resolution and 88.7 percent screen to body ratio. It may pack a 6,000mAh battery with support for 18W fast charging along with triple rear camera setup. The camera system might include a 48-megapixel primary sensor, an 8-megapixel ultra-wide lens and a 2-megapixel macro lens.

However, the company has not confirmed the specifications but you can take the above details with a pinch of salt until the devices are officially announced.

Komila Singhhttp://www.gadgetbridge.com
Komila is one of the most spirited tech writers at Gadget Bridge. Always up for a new challenge, she is an expert at dissecting technology and getting to its core. She loves to tinker with new mobile phones, tablets and headphones.
Facebook
Twitter
WhatsApp
Linkedin
ReddIt
Email
Previous article
September 21 Amazon Quiz: Answer five easy question and win Rs 20,000 Amazon Pay Balance
Next article
OnePlus 8T is coming, the company confirms as the event page goes live in India