Both the smartphones come with a quad rear camera set up 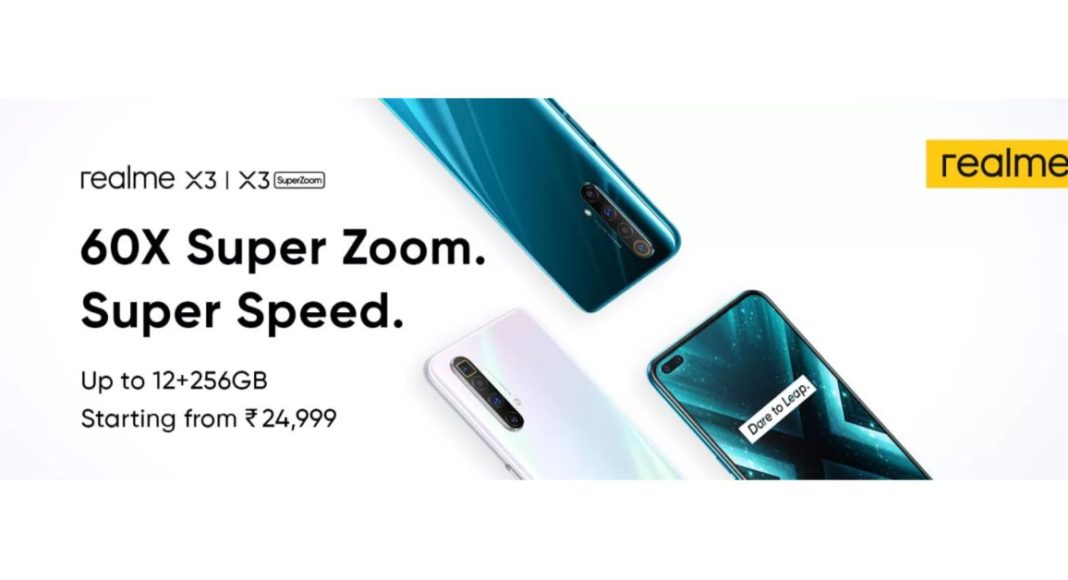 Realme X3 SuperZoom and Realme X3 are now official in India. Alongside their two smartphones, the company has also introduced Realme Buds Q in the country. The latest handsets come with a 120Hz display as well as a dual front camera set up. Both the smartphones are powered by octa-core Qualcomm Snapdragon 855+ processor. The Realme X3 SuperZoom is the top model of the series that features a periscope-style lens setup offering 5x optical zoom support.

Realme X3 sports a 6.6-inch full-HD+ Ultra Smooth display with 1,080×2,400 pixels of resolution. The display comes with a 120Hz refresh rate support with 20:9 aspect ratio and 90.5 percent screen-to-body ratio and there is a Corning Gorilla Glass 5 protection. It is powered by Qualcomm Snapdragon 855+ processor with Adreno 640 GPU for graphics. It comes with 8GB of LPDDR4x RAM and 128GB of UFS 3.0 storage.

For connectivity, there is 4G, Wi-Fi 802.11ac, Bluetooth v5.0, GPS/ A-GPS, and a USB Type-C port. The sensors on the phone include an accelerometer, ambient light, gyroscope, magnetometer, a proximity sensor and a side-mounted fingerprint sensor. The smartphone packs a 4,200mAh battery with 30W Dart Flash Charge fast charging support.

Realme X3 SuperZoom comes with the identical specification, processor and the display are the same as the above however it comes with up to 12GB of LPDDR4x RAM and 256GB of UFS 3.0 storage. The battery, connectivity as well as sensor details are also the same. X3 SuperZoom comes with a quad rear camera set up having a Samsung GW1 64-megapixel primary sensor with a secondary 8-megapixel ultra-wide-angle sensor, a 2-megapixel macro lens and a periscope-style 8-megapixel lens offering a 5x optical zoom support. The camera set up is supported by Starry Mode for astrophotography. While on the front there is a dual selfie camera set up with a 32-megapixel primary lens and a secondary 8-megapixel ultra-wide-angle lens.

Komila Singhhttp://www.gadgetbridge.com
Komila is one of the most spirited tech writers at Gadget Bridge. Always up for a new challenge, she is an expert at dissecting technology and getting to its core. She loves to tinker with new mobile phones, tablets and headphones.
Facebook
Twitter
WhatsApp
Linkedin
ReddIt
Email
Previous article
Realme X3 series of smartphones and Realme Buds Q to launch in India today
Next article
Realme Buds Q with a 10mm large driver launched in India