Redmi 7 with Snapdragon 632 SoC and 4,000mAh battery launched in India: Price and specifications 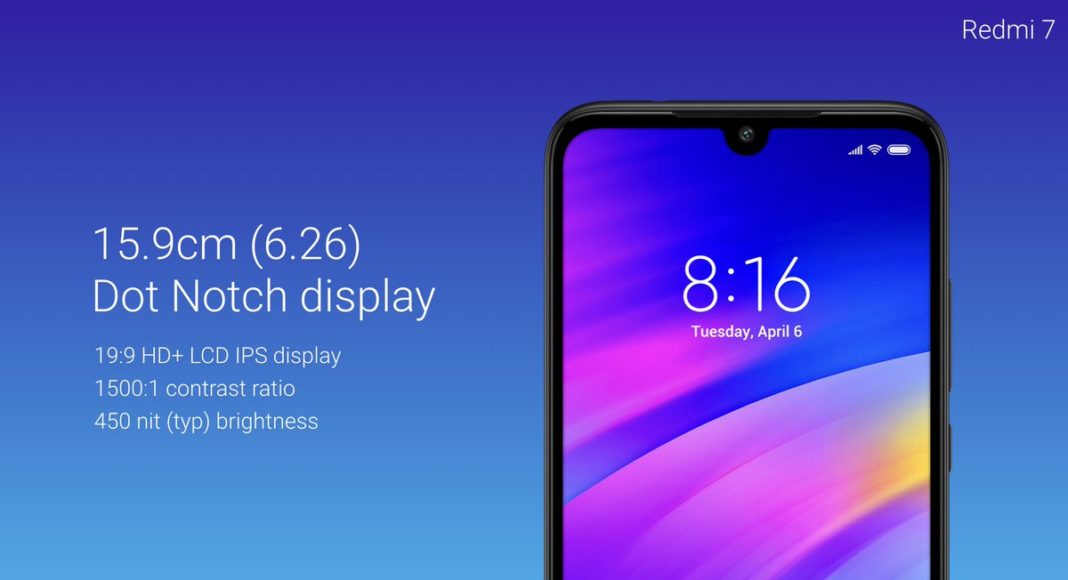 Chinese smartphone brand Xiaomi today launched its Redmi 7 smartphone in India along with the much-awaited Redmi Y3. While Redmi Y3 was expected to be unveiled in the country today, Redmi 7’s launch comes in as a surprise.

But, since the handset had already launched in China last month, there was nothing we didn’t know about it apart from its price in India. The Redmi 7 is powered by an octa-core Snapdragon 632 SoC paired with up to 3GB of RAM and it houses a 4,000mAh battery. Here’s a look at all the details about the newly launched Redmi smartphone in India:

The Redmi 7 smartphone comes in three colours options – Comet Blue, Lunar Red and Eclipse Black – and all of them comes with gradient back panels. The handset’s body has an Aura Smoke design.

Redmi 7 smartphone sports a 6.26-inch HD+ display and it comes with an aspect ratio of 19:9 and a water-drop notch display. Its display is protected by the Gorilla Glass 5 and has a colour gamut of 84% NTSC. As mentioned before, it is powered by the Snapdragon 632 SoC paired with up to 3GB of RAM. The device packs 32GB of internal storage and comes with support of microSD cards of up to 512GB.

Redmi 7 runs Android 9 Pie skinned with MIUI 10 and it packs a 4,000mAh which, according to the company, can last up to 2 days and offer 17 days of standby time. But the battery doesn’t come with fast charging support. It comes with dual-SIM card slot with a dedicated microSD card slot.

Make some noise because #Redmi7 is dropping with a 2+1 SIM card slot. That’s right! Use 2 VoLTE SIM cards and 1 microSD (upgradable up to 512GB) on the #UltimateAllRounder. Enough said. pic.twitter.com/Wn8J6uorWb

On the camera front, the Redmi 7 holds a dual-rear camera setup which comprises of a 12MP primary sensor with an f/2.2 aperture clubbed with a 2MP secondary depth of field camera. On the front, there is an 8MP AI selfie camera with no front flash. Both the rear and the front camera of the Redmi 7 comes with AI support. The rear camera comes with depth of field, scene detection of up to 33 scenes, Full HD video recording at 60fps. There is also a rear-mounted fingerprint scanner at the top of Redmi 7.

Other features of the Redmi 7 include 4G VoLTE, Wi-Fi, Bluetooth v4.2, GPS, USB, Infrared blaster, and a 3.5mm headphone jack.

Aman Singhhttps://www.gadgetbridge.com/
Aman Kumar Singh has a Masters in Journalism and Mass Communication. He is a journalist, a photographer, a writer, a gamer, a movie addict and has a love for reading (everything). It’s his love of reading that has brought him knowledge in various fields including technology and gadgets. Talking about which, he loves to tweak and play with gadgets, new and old. And when he finds time, if he finds time, he can be seen playing video games or taking a new gadget for a test run.
Facebook
Twitter
WhatsApp
Linkedin
ReddIt
Email
Previous article
Redmi Y3 with 32MP super selfie camera, 4,000mAh battery launched in India: Price and specifications
Next article
Asus and Lenovo’s new laptops pack the latest 9th Generation Core CPUs and NVIDIA GTX-16 series GPUs: Get all the details here