Here is our review of the Samsung Galaxy A12, check out how well it performed on our test bench. 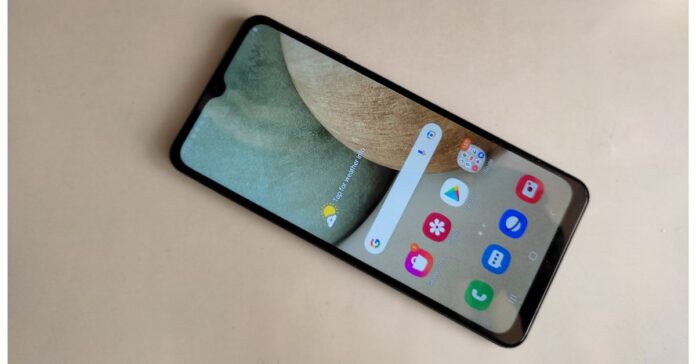 We have been using the Samsung Galaxy A12 for quite some time now. We are today sharing our experience in our review of Samsung Galaxy A12. Before we move ahead let’s quickly see what’s the biggest USP of the phone. The device features a 48-megapixel quad-camera setup and a 6.5’-inch HD+ Infinity-V display. It also packs a 5,000mAh battery and is priced under the sub Rs 15,000 segment. With that let’s dive into the Samsung Galaxy A12 review starting with the design.

In terms of design, the Samsung Galaxy A12 is identical to the Galaxy M12(review), which we have recently reviewed. It bears the same rugged texture on most parts of the rear panel except the bottom quarter where you will find a smooth finish. A good thing about the rear panel is that it does not attract any smudges or fingerprints. There is a quad rear camera set up in the left-hand corner of the back. Unlike M12 here the camera bump is a little raised and not lies completely flat. Even with a heavy camera bump, it doesn’t wobble when it is kept on a hard flat surface. The phone does feel bulky in the hand but the weight distribution is good. Consumers will take some time to get used to it. 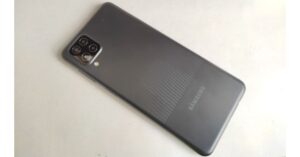 On the utility front, it has a power button which is also a fingerprint scanner along with the volume rocker that is given on the right side of the frame. Frankly speaking, this side-mounted fingerprint scanner is as fast as the Galaxy M12, which is a good thing. The left side of the frame is clean except for the dual SIM tray being placed on it. The headphone jack, USB Type-C port and speaker grill are given at the bottom. 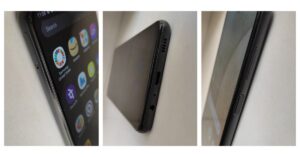 Moving on to the display, the Samsung Galaxy A12 features a 6.5-inch HD+ TFT Infinity-V Display with 720×1,600 pixels of resolution and an aspect ratio of 20:9. It has a standard 60Hz refresh rate, which is the only difference between the Galaxy M12 and A12. However, considering the price Samsung should have gone for an FHD or an AMOLED display same as provided by its competitors like Redmi Note 10 (review) and Redmi 9 Power (review)at a similar price point. 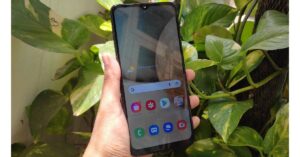 Still, at this price point, the display looks pretty nice. Rather than the hole punch cut out, it has a V-shaped camera notch at the top. The colour and the brightness are absolutely fine even when using outdoors. At the same time, the display is WIDEVINE L1 certified so that you can stream HD content on it easily. The viewing angles are good too.

Talking about the performance, the Samsung Galaxy A12 is powered by octa-core MediaTek Helio P35 SoC paired with up to 4GB of RAM and up to 128GB of storage. Noticeably P35 is a mediocre chipset that also has an old processor. The phone is good for day to day usage but in terms of gaming, it is not recommended for high-end gaming but for normal casual gaming only.

It is an entry-level phone but you can still play some games on it such as COD: Mobile on low settings. The mobile phone’s performance could have been better if the company opted to go for a better chipset in this price range. In terms of RAM and storage, the smartphone comes with 4GB RAM and 64/128GB of storage. 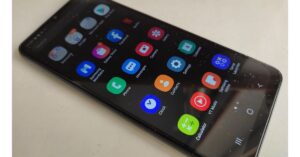 With the main tech specs out of the way, let’s talk about the software. The phone runs One UI 2.5 based on Android 10. The Galaxy A12 is secured by Knox security running version 3.6. Again in terms of security, the device equips a side-mounted fingerprint sensor and face unlock, which are equally fast. Also, OS-wise you won’t get to see much bloatware or ads. 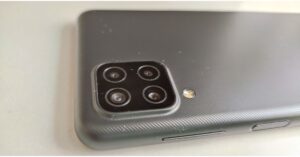 The shots taken from the Galaxy A12 offer a good dynamic range in good light conditions. Whereas the wide-angle lens is helpful in landscape photography and this also offers good wide-angle night shots too. The macro sensor allows you to get really close to the subject. The portrait shots are perfect with edge detection on point. You can get a fair idea from the below samples.

The rear cameras also allow you to record videos in both normal and wide-angle mode. It allows you to shoot up to 1080p videos at 30fps and this applies to the front camera as well. The camera quality of the phone is impressive for the price.

Speaking of the Battery life, the Samsung Galaxy A12 is fueled by a massive 5,000mAh battery supplied with a 15W fast charger. It takes more than 2 hours and 30 minutes to get fully charged from zero to 100. When fully charged it can easily last for a day and a half or even two days depending on the usage.

Samsung Galaxy A12 is a decent smartphone. The company has worked on its form factor while providing better cameras and enhanced battery life. Though it is not a perfect budget phone considering its display and gaming performance as its competitor, it is very close. To sum it up, it comes with good cameras, it is perfect for day to day usage and we would recommend Galaxy A12 who want something in the price range of Rs 10,000 – 15,000.