The smartphone will feature a 6.4-inch Super AMOLED display 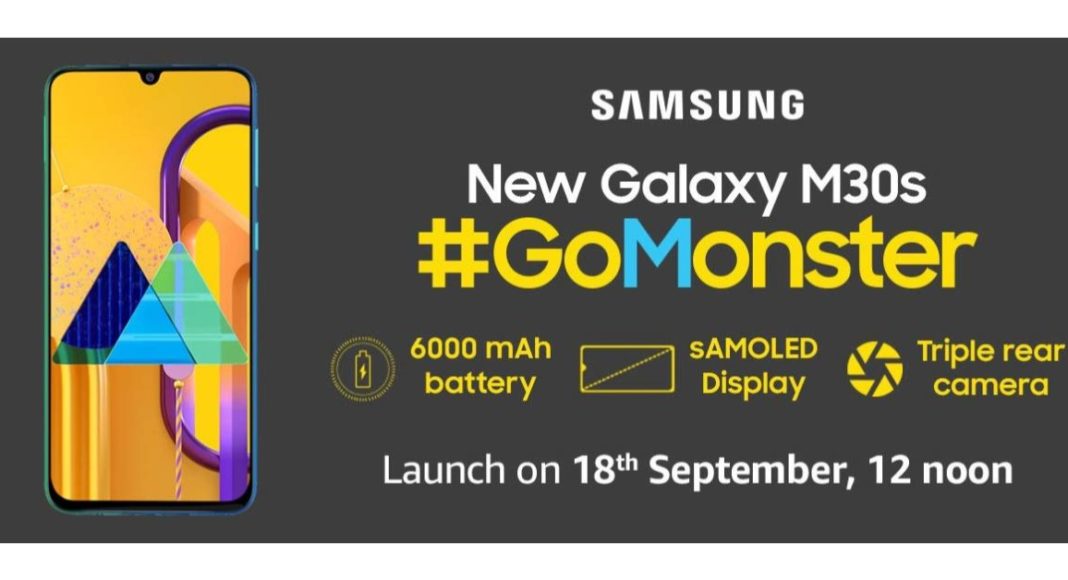 The South Korean Company, Samsung, is all geared up for the launch of its new smartphone in India. The company will be launching the Samsung Galaxy M30s in the country today. The biggest selling point of the upcoming smartphone is its huge 6,000mAh battery. The key highlights include a super AMOLED display screen along with a waterdrop notch, triple rear cameras and the latest Exynos 9611 SoC processor on it. Read more about the device, its price and specifications details.

The Samsung Galaxy M30s launch event will begin at 12 noon in India today. Ahead of the launch, the e-commerce website Amazon has launched a microsite for the upcoming smartphone where it has announced a contest. Those who guess the correct pricing of the device can get a chance to win Samsung Galaxy M30s.

Until now the company has not revealed the pricing of the upcoming smartphone but it is speculated to fall between Rs 15000 and Rs 18000. The company is also expected to offer Galaxy M30s in various RAM variants. We already know that M30s is the successor of Galaxy M30 that was launched in the country a few months ago. The 4GB RAM/64GB storage variant of Samsung Galaxy M30 costs Rs 14,990, while the 6GB RAM/128GB storage model costs Rs 17,990 so we can expect the starting price of the upcoming smartphone to fall between aforementioned price range or a bit higher as it is the upgraded variant.

According to the Amazon listing, Samsung Galaxy M30s the phone will come loaded with a massive 6,000mAh battery touted to be India’s first smartphone to arrive with the said battery capacity. The phone will also feature an sAMOLED display along with triple rear cameras.

But the company has already revealed the key specifications of the Galaxy M30s. The device will be carrying a 6.4-inch Super AMOLED Infinity-U Display along with the large battery. The phone will be powered by an Exynos 9611 SoC processor along with triple cameras and a fingerprint scanner on the back panel.

If we go by the Android Enterprise listing the company will be offering the phone in two storage variants 4GB RAM with 64GB of storage and 6GB RAM with 128GB of internal storage option. The triple rear cameras are supposed to include a 48-megapixel primary camera with an f/2.0 aperture, along with a 5-megapixel depth sensor with an f/2.2 aperture, and an 8-megapixel super-wide-angle lens with an f/2.2 lens. On the front, the phone is expected to feature a 16-megapixel selfie camera.

Komila Singhhttp://www.gadgetbridge.com
Komila is one of the most spirited tech writers at Gadget Bridge. Always up for a new challenge, she is an expert at dissecting technology and getting to its core. She loves to tinker with new mobile phones, tablets and headphones.
Facebook
Twitter
WhatsApp
Linkedin
ReddIt
Email
Previous article
Hero Electronix launched AI-powered Qubo Smart Indoor Camera in India
Next article
OnePlus CEO shared the first images of OnePlus 7T, with triple rear cameras