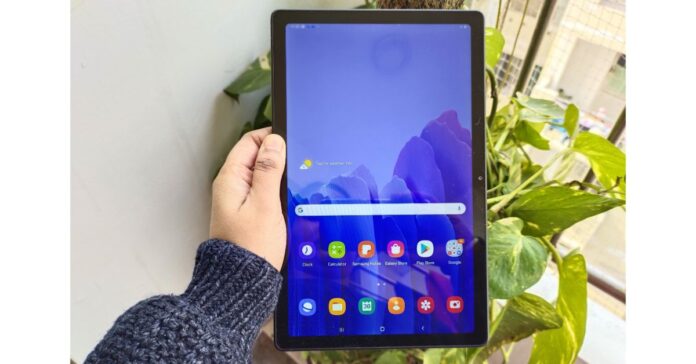 The South Korean smartphone brand, Samsung, launched an affordable Tablet (Samsung Galaxy Tab A7) in the Indian market. It sells at Rs 21,999 for the LTE model and the Wi-Fi model comes with a price tag of Rs 17,999. This is the company’s third tab this year after Tab S6 Lite and Tab S7, which is not only an economical option but comes with a range of features. Unlike smartphones, tablets are not for everyone’s liking because of its huge size and less portability. But due to the pandemic a trend of work from home and online classes registered in a surge of tablet sales across the globe. So if you are looking to buy a new Tablet that fits your budget then you should check out this review of Samsung Galaxy Tab A7.

First things first, the box of the Samsung Galaxy Tab A7 contains a  USB-C cable and a power adaptor. However, this model does not include back cover or a stylus, which comes with the models of Tab S6 Lite and Tab S7. However, you can purchase it separately. 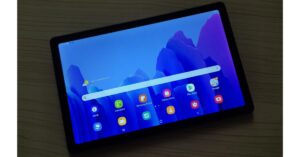 Not every company offers a budget tab with a metallic build, that gives a very premium feel to Samsung Galaxy Tab A7 in this segment. The company has made some compromises in some aspects, which we will talk about later in this review. Here you get a solid aluminium form factor and we reviewed the Silver colour option. It is available in two more colours — Dark Gray and Gold. There is a single camera module on the rear at the top left corner and a company’s branding is stamped right at the centre of the back. 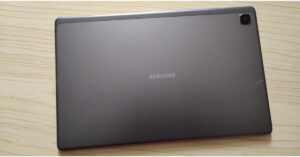 On the front, there are thick bezels surrounding the display and the front camera is placed on the right-side bezel. There are quad speakers on the Samsung Galaxy Tab A7 powered by Dolby Atmos, two on the top and two down below with a USB Type-C port and a 3.5mm headphone jack. On the left side, you will find a volume rocker along with a power lock button. In the same way on the right side towards the bottom, there is a SIM+MicroSD card tray. 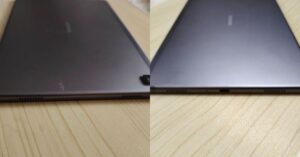 Upfront, the Samsung Galaxy Tab A7 carries a decent 10.4-inch WUXGA+TFT display having 2,000×1,200 pixels of resolution. The thick bezels on the sides reduce the chances for accidental touches. The picture quality is adequately sharp delivering decent colours however we felt that the brightness of the Tab, as well as viewing angles, could have been better.

It offers a peak brightness of 329 nits, which is not bright enough to be used outdoors. We had a hard time viewing it under direct sunlight. However, this tab is not meant for outdoors but for indoors. Barring this, you will find the display to be fairly well and vibrant also the touch response is free from any flaw or defect in condition or quality, and also feels smooth. 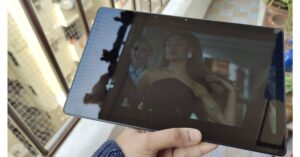 In terms of audio quality, the quad speakers powered by Dolby Atmos produces clear, punchy and loud audio. Although it is not as powerful as the flagship tabs, the audio quality is good enough when at the highest volume level and you won’t feel any distortion in the sound.

As for the performance, the Galaxy Tab A7 is powered by an octa-core Qualcomm Snapdragon 662 processor paired with 3GB of RAM with 32GB storage. There is a dedicated micro SD card slot on the device to further expand the memory to up to 1TB. The device is good at performing daily tasks such as surfing the web, video calls, streaming online content and it can also manage light gaming. On heavy gaming, you would need to tweak the setting a little bit especially in the case of Asphalt 9 but other games like Call of Duty we did not notice any frame drops or jittery gameplay.

With regards to the software and UI, the Samsung Galaxy Tab A7 comes with One UI 2.5 based on top of Android 10 out of the box. It is expected to get Android 11 with One UI 3 in the future updates. 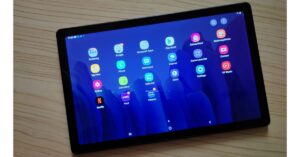 Just like Tab S6 and Tab S6 Lite here you will also get features like split-screen and pop up view. We did not come across any lag during the performance tests or while multitasking. Although launching some apps did take longer than usual, but it that is not a deal-breaker. Just like big smartphones these days, using a Tablet is not a one-handed task. And in 99% cases, the tablet is very comfortable to use.

There is no fingerprint sensor on the Samsung Galaxy Tab A7, which found a bit odd. However, there is a face unlock system which is not super accurate especially in the dark/low lit areas. Alas, we ended up using a pin or pattern unlock most of the times.

In terms of camera capabilities, Samsung has only included an 8-megapixel rear camera and a 5-megapixel front camera for taking selfies. The cameras are not built for picture capturing but for basic needs such as video calling or office Zoom calls. The rear camera is good enough to capture notes, too. It gives better results in well-lit conditions. Speaking about the front camera, the sensor is placed at the centre of the top bezel, which forces you to keep the tablet in a landscape mode during a video call. This is okay for video calling or office Zoom meetings.

Throwing some light on the battery, the Samsung Galaxy Tab A7 packs a 7,040mAh battery which is similar to the battery capacity available on the Tab S6 Lite, which we reviewed a while ago. The battery capacity is more than sufficient for performing day to day tasks, it delivered approximately 13 hours of life while streaming videos and browsing the internet (continuously). The gaming does decrease the battery life by one or two hours. For charging, the company does provide 15W fast charging support, but Samsung has only included a 7.5W charger in the box, which makes the charging process a bit slow.

All in all, for us this budget tablet offers all the important features with no drawbacks. Samsung Galaxy Tab A7 could have been a lot better if the company had provided a better processor with more RAM and storage. However, we have no complaints on the battery front but Samsung should have included a 15W fast charger in the box. Overall, we would definitely recommend you to go for this tablet if you are looking for a budget tablet for daily office calls or student work.

Viewing angles and brightness could have been better

Should have considered a better chipset

- Advertisment -
Samsung Galaxy Tab A7 Review: A go-to budget tabletThe South Korean smartphone brand, Samsung, launched an affordable Tablet (Samsung Galaxy Tab A7) in the Indian market. It sells at Rs 21,999 for the LTE model and the Wi-Fi model comes with a price tag of Rs 17,999. This is the company’s third...