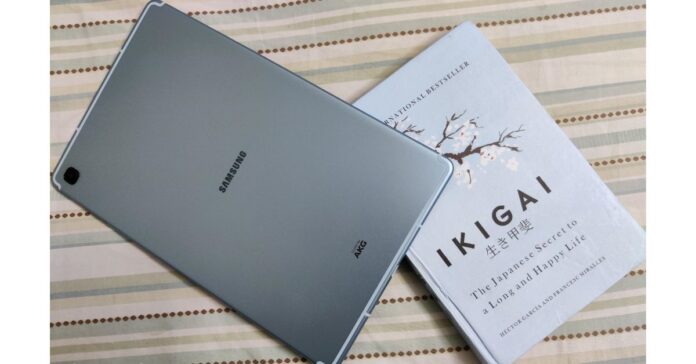 There are very few brands that are good at offering Tablets at a great price point. Samsung is one of the biggest makers in the market at the moment, which is selling tablets at both premium and non-premium points. The new Samsung Galaxy Tab S6 Lite is giving a tough fight to the iPad by Apple. Right now, the device is equally cost-effective and one of the best non-premium tablets that the company is offering. It is the toned-down version of the Samsung Galaxy Tab S6 that arrived last year falling in the premium category. The Tab S6 Lite is perfect for students to organize, multitask, and create content effortlessly. While all the schools are taking online classes for this academic year because of the global pandemic and if you were planning to buy a tab for your children so that they can take notes, create and share then read our full review of the Samsung Galaxy Tab S6 Lite that will help you make your choice. 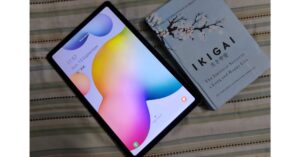 As we mentioned earlier, the Samsung Galaxy Tab S6 Lite is the watered-down variant of the Samsung Galaxy Tab S6, that was launched last year so it looks very identical to its elder sibling. Samsung Galaxy Tab S6 Lite features a 10.4-inch WUXGA TFT display with 1,200×2,000 pixels of resolution that is slightly smaller than Tab S6(Review). It has thick bezels, sleek looks and is lightweight. Users get a sleek all metal and glass body, and on the front, it has a selfie camera too. While on the back it has a single selfie camera at the top left corner. The company’s logo is embossed at the centre and the AKG branding is done at the bottom of the back. It has magnetic edges to hold the S Pen to the tablet. In this version, the stylus doesn’t support Bluetooth, which allowed it to control the Tab S6 from a distance. 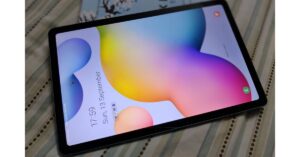 On the right side, there is a power button that can also be used to wake up Bixby, a volume rocker button and a SIM card slot to hold a Nano-SIM and a microSD card. While on the top edge you get a 3.5mm headphone jack and on the lower part it has a USB Type-C port for charging. Unlike Tab S6, which has quad speakers tuned by AKG here, you get only dual speakers. As it does not sound better than its sibling but we were ok with it as it is a toned-down variant. For the review we received the metallic Angora Blue, however, the company offers it in more colours like Oxford Gray and Chiffon Pink. 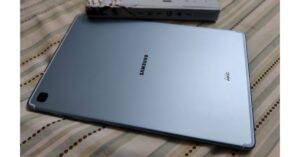 Coming to the performance of the display, Samsung Galaxy Tab S6 Lite offers good viewing angles, but it could have been better as the brightness was low and while using it outdoors the screen becomes reflective. If you wish to read something you need to adjust the angles to lessen the reflection. So, we barely used it outdoors. This must be because it has a TFT display and lacks a super AMOLED HDR10 screen, which comes on the higher-end Tab S6. 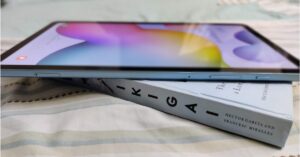 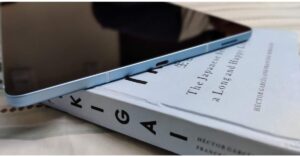 We used the Samsung tablet to stream videos, shopping and yes, it was fun playing Ludo King and Asphalt 9 on this on the weekends. While the pandemic is still on and most of you are working from home and the schools are also shut this one can be your companion. As you can also attach a keyboard to this tablet and start typing as it comes loaded with Microsoft apps.

The device is powered by an octa-core Exynos 9611 processor paired with 4GB of RAM and 64GB of storage, which can be expanded using a microSD card up to 1TB. The company offers it in two variants Wi-Fi-only with NFC and Bluetooth while the other one is an LTE version with GPS.

Being the Lite variant, this device lacks a lot of functionalities when it comes to performance. However, it can easily handle lots of tasks and doesn’t heat up while multitasking. It is great at doodling, taking notes and more. 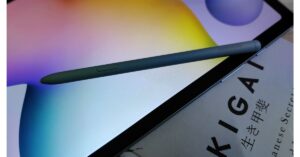 The USP of the mid-range slate is its S Pen stylus, included in the box. The Pen is both pressures and tilt-sensitive, which clasps on this tablet magnetically so that it doesn’t fall off. The stylus is comfortable to hold and is great at scribbling and writing notes. You get the onscreen commands when you hover the pen over the display. Most of the time we used it to write something as it supports handwriting-to-text translation, but this also depends on how messy your handwriting is, as sometimes it cannot recognise what is written. You do not require to use an external mouse or a keyboard to stay productive, as just the tablet with the S-pen is good. But if you wish to, a Bluetooth Keyboard or a Mouse can also be paired with it.

With the Exynos 9611 processor, you can only play games such as Asphalt 9, PUBG at mid-low graphics settings, and when compared to its sibling the results were not that satisfying.

We ran a couple of benchmarks on it to know the performance of the device compared to its elder sibling. The Galaxy Tab S6 Lite was able to get 1247 Multi-core points and 346 in Single-core score tests of the Geekbench’s results.

The Galaxy Tab S6 Lite runs on One UI 2.0 on top of Android 10. Using the tab gives you a feel of any Samsung smartphone but with a larger screen. The UI is similar to what we have already seen on other devices by the company. With the Smart Stay feature on the tab, the display stays on if you keep on looking at the screen. The interface is clean with a very few but important apps, which come pre-installed on the device such as Netflix, YouTube Music and Microsoft apps.

Multitasking has been made easy with the split-screen feature on the tab. So, if you are the one who gets annoyed by switching back and forth between two apps then you can use this feature. This can be done by opening the recent apps button. Then tap on the app icon which you want to open first and select open in the split-screen view from the options. After this tap on the second app that you want to open and the split-screen will open. The size of each window can be adjusted by holding and dragging the separating line between the two apps and you are good to go. This feature can be used in both portraits as well as landscape mode. We used this feature in the comfort of our home to create new content for our readers while not missing the ongoing virtual launches as the pandemic is still on and the results were very good.

While there is no fingerprint scanner on the Tab S6 Lite you can go for the face recognition for the biometrics.

Up next, we tested the camera performance of the Galaxy Tab S6 Lite. It has two cameras on it, an 8-megapixel rear camera with auto-focus capable of recording videos in 1080p at 30fps. On the front, there is a 5-megapixel selfie camera housed inside a punch-hole design display. Surprisingly, it managed to get some nice shots for us with acceptable details. While the selfie camera is also good for taking selfies but we suggest you use it for video calling and not for photography purposes as it would not be easy to use such a large tablet for that purpose. 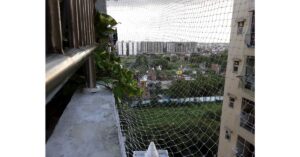 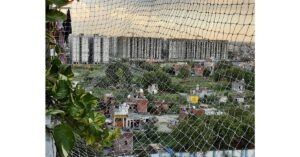 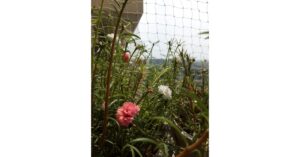 During our test, the battery lasted for more than two days on a single full charge. The device comes with a 7,040mAh battery so you do not need to charge it frequently as it delivers satisfactory battery life. But if you love to binge movies and Netflix then it would run on for a day and a half. The battery of the Samsung Galaxy Tab S6 Lite takes around three hours to fully charge it from zero to 100 percent.

Some might call the Samsung Galaxy Tab S6 Lite a Samsung Android phone but with a bigger display, but is not that as it can do so much more. The company is offering the Tab at a slightly expensive price range for what it offers. But the S Pen Stylus is an additional accessory which the company is offering with the device at no extra cost that other companies do not offer. So the price is somewhat justified.

As the new trend of online classes is on in full swing across the globe due to the coronavirus pandemic, we think Galaxy Tab S6 Lite would serve well to your children’s requirements from attending virtual classes to taking notes and playing. As it comes preloaded with Microsoft apps you do not have to pay any additional cost to get the subscription.

Camera performance could have been better

- Advertisment -
There are very few brands that are good at offering Tablets at a great price point. Samsung is one of the biggest makers in the market at the moment, which is selling tablets at both premium and non-premium points. The new Samsung Galaxy Tab...Samsung Galaxy Tab S6 Lite review: The company's solid iPad rival