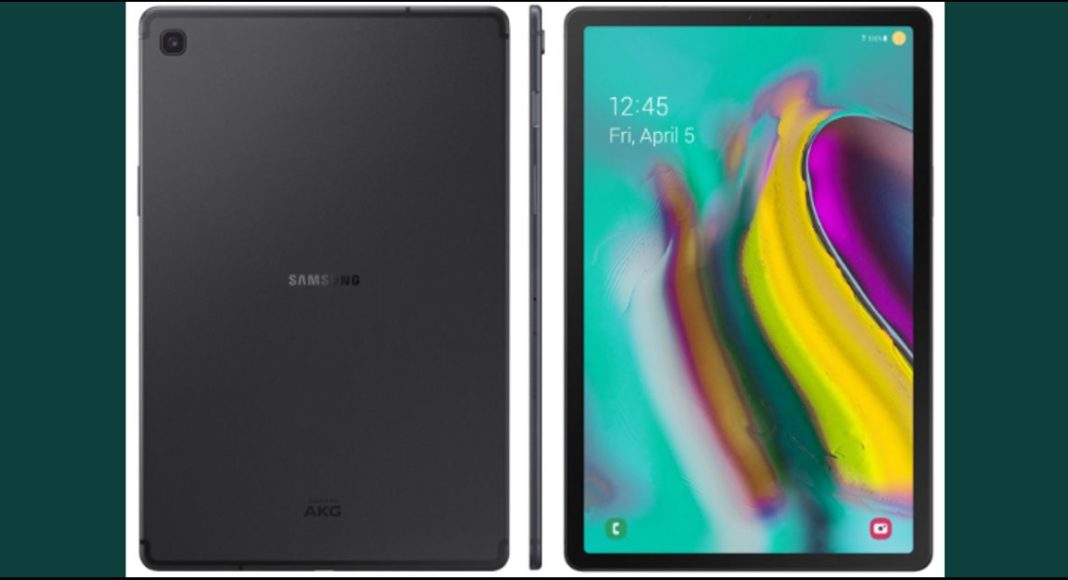 Tablets started becoming a dying breed after smartphones with displays more than 6-inches in size became popular. There are less newer tablets in the markets than there were four years ago. Many tablets came and went but only two companies are still launching the upgraded versions of their tablets every year. We are talking about Apple’s iPad and Samsung’s Galaxy Tab series.

The Tab series which is Samsung’s reply to Apple’s iPad might be getting a successor. This will be the next iteration of the Galaxy Tab S4 tablet. The S4 tablet was launched last year and it was Samsung’s flagship tablet. But now, a new leak has surfaced online which is not about the Tab S5, instead it talks about Samsung’s underpowered and budget-oriented tablet named Galaxy Tab S5e. The leak was posted on Twitter by Evan Blass.

Just like the Galaxy S10e, Samsung Tab S5e would be an affordable and budget friendly product in the flagship tablet lineup. The image shows that the bezels of the tablet are smaller than the ones on the Galaxy Tab S4. There is a camera at the back of the tablet and also at the front for selfies. The tablet is expected to run the latest Android 9 Pie skinned with One UI. The fingerprint scanner has been moved to the side of the device instead of the back. It is likely that the fingerprint scanner may also work as a power button or a lock/unlock button. The antenna lines of the device are at the top and bottom at the rear of the device. The device also will have magnetic connectors on the side to attach the folio Book Cover keyboard.

Written at the lower back of the device is ‘Sound by AKG’ which could mean that the speakers in the Tab S5e could be built by AKG. Most of the Samsung phones now come bundled with AKG earphones so it is no surprise that the company is developing speakers for Samsung products. But it is still not sure if Galaxy Tab S5e will come with two speakers or four speakers like we saw on Galaxy Tab S4.

As of now, there is no word on the exact specifications of the upcoming tablet and its date of availability.

Aman Singhhttps://www.gadgetbridge.com/
Aman Kumar Singh has a Masters in Journalism and Mass Communication. He is a journalist, a photographer, a writer, a gamer, a movie addict and has a love for reading (everything). It’s his love of reading that has brought him knowledge in various fields including technology and gadgets. Talking about which, he loves to tweak and play with gadgets, new and old. And when he finds time, if he finds time, he can be seen playing video games or taking a new gadget for a test run.
Facebook
Twitter
WhatsApp
Linkedin
ReddIt
Email
Previous article
Vivo to launch a foldable phone under its sub-brand iQoo
Next article
Realme 2 Pro receives a price cut in India, now starts at Rs 12,990