The tablets will make their debut alongside Galaxy S22 Series.

The Galaxy Unpacked Event is just next week and the company is anticipated to launch the Samsung Galaxy Tab S8 series, along with the company’s flagship Galaxy S22 series smartphones. Just ahead of the launch, official images of the upcoming tablet have surfaced on the web giving us a fair idea how the smartphone will look like and its specification.

According to the popular tipster, Evan Blass, the South Korean giant will be introducing three models to its flagship tablet series namely Samsung Galaxy Tab S8, Galaxy Tab S8+, and Galaxy Tab S8 Ultra. He has shared the official images of the upcoming tablet taken from Samsung’s official website in Italy as the language on the photos is in Italian. 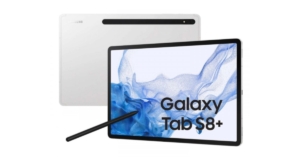 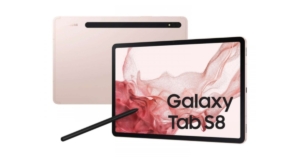 The leaked renders suggest S Pen support along with USB Type C as a connectivity option. The devices are said to not ship with a charger. However, the regular S8 is said to include an 8,000mAh battery. Meanwhile, the Galaxy Tab S8+ is going to be powered by a 10,090mAh battery and the Tab S8 Ultra will pack an 11,200mAh battery. All the models will have 45W fast charging support.

In terms of hardware, all three models of the Samsung Galaxy S8 Series will equip Qualcomm Snapdragon 8 Gen 1 SoC with up to 16GB of RAM with 512GB of internal storage that can also be expanded.

Speaking about the pricing the Samsung flagship tablets were discovered on a European retailer which suggests that the vanilla S8 will be priced at EUR 970 which translates to Rs 82,100 while the Galaxy Tab S8+ and Galaxy Tab S8 Ultra are priced at EUR 999 and EUR 1,699 translating to Rs 84,500 and Rs 1,43,700 respectively.

Komila Singhhttp://www.gadgetbridge.com
Komila is one of the most spirited tech writers at Gadget Bridge. Always up for a new challenge, she is an expert at dissecting technology and getting to its core. She loves to tinker with new mobile phones, tablets and headphones.
Facebook
Twitter
WhatsApp
Linkedin
ReddIt
Email
Previous article
Netflix users can now remove series or movies from the “Continue Watching” list
Next article
4 February 2022 Amazon Quiz today answers: Answer to win Rs 10,000 Amazon Pay Balance