It is expected that the smartphone will be launched at the ‘Galaxy Unpacked’ event. 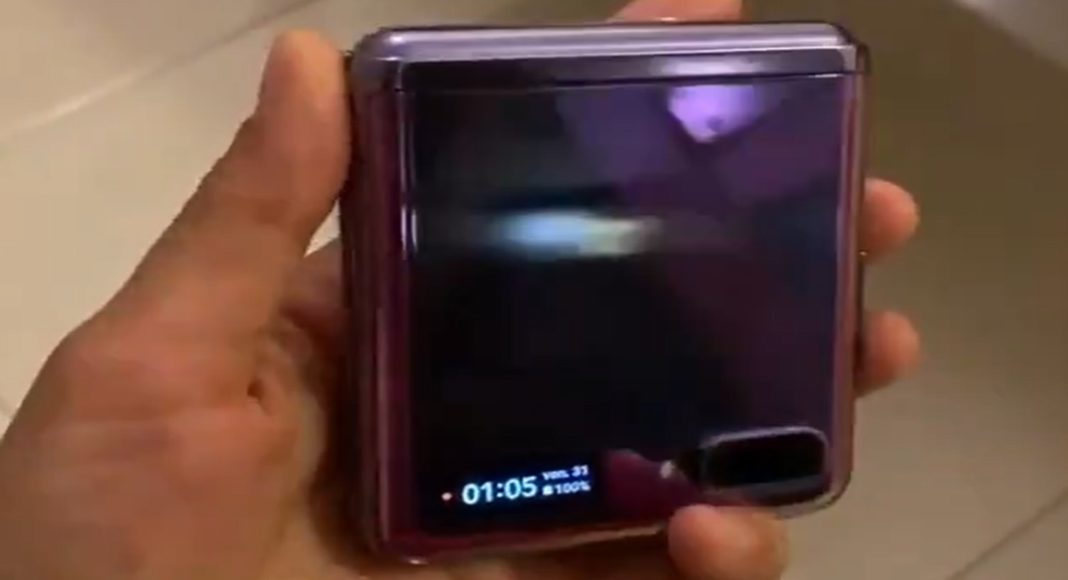 Samsung ‘Galaxy Unpacked’ event, which is slated to take place in San Francisco on February 11, is expected to be the launch pad for the tech giant’s next folding smartphone. As the time is inching closer, one after another leak is surfacing online. And now popular leakster Ben Geskin has come out with a 19 seconds claiming to give out first hands-on view of allegedly Samsung Galaxy Z Flip.

However, the leaked video doesn’t give out much information regarding the specifications of Samsung Galaxy Z Flip but it showcases folding mechanism of the smartphone and looks quite easy to carry.

Coming on the design aspect, it appears to be similar to the recently launched Samsung Galaxy Fold but is quite compact. Once the device is folded, we could see that the Galaxy Z Flip carries a dual-camera set on the right side. On the other hand, right side showcases a small screen displaying digital clock as well as battery status.

The unfolded version of Samsung Galaxy Z Flip reveals that the device comes with a 6.7-inch Full HD+ AMOLED display which is huge as compared to Motorola Razr. It means it will not be very easily to fold the device single handedly.

Earlier report by serial tipster by Roland Quandt had revealed that Samsung Galaxy Z Flip is powered by a Qualcomm Snapdragon 855+ processor. The smartphone is likely to house an 8GB RAM along with a storage capacity of 256GB. Moreover, it is believed that this much-anticipated device will carry a 3,300mAh battery.

Another report by XDA Developers hinted that Samsung Galaxy Z Flip, which is also believed to be called Samsung Galaxy Fold 2, will likely come with Super-Fast charging. The showcases a string of code with a file titled ‘bloom_front_charging_effect_superfast’. If we believe the reports, Bloom is the internal code-name for Samsung Galaxy Fold 2.

There have been news reports that Samsung Galaxy Z Flip may not come with 5G. With model number SM-F700U, the smart passed through the FCC. It has been report by droidlife that There is no 5G in the Galaxy Z Flip. However, it will come with major LTE band capabilities on AT&T, T-Mobile, Sprint, and Verizon.

Only time will reveal, what Samsung’s next folding will be called and what new it will offer the smartphone users on the specifications front. Till then, stay tuned.