Specifications and details of the LG W10 leaked online

The smartphone is expected to come with 3GB RAM and 32GB storage as its base variant. 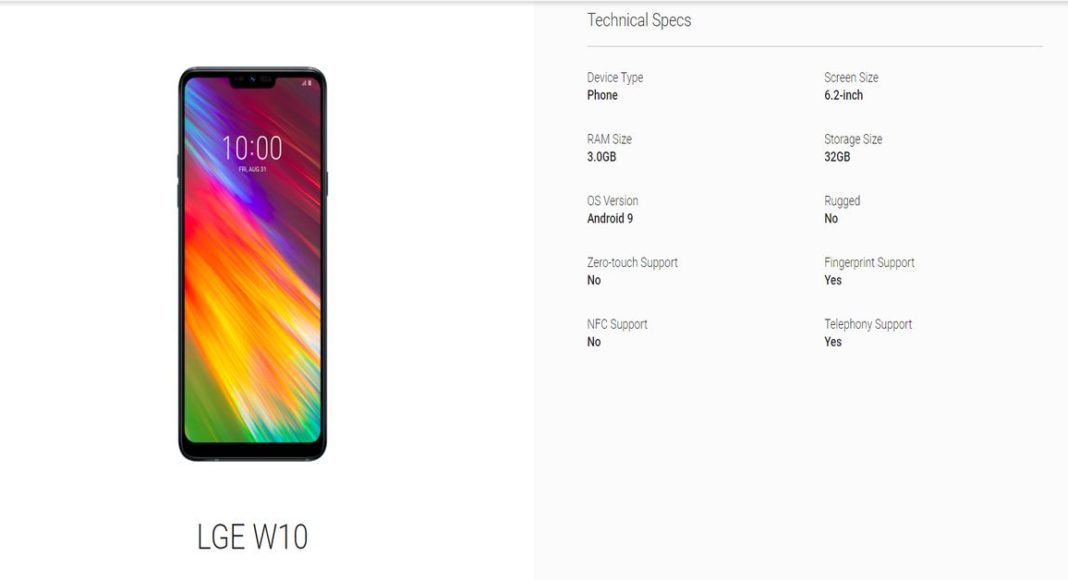 LG W10 has been listed as part of Google’s enterprise directory, which recommends the Android smartphone for work. So, its truthfulness can be taken into consideration. Till now, the launch date or the pricing of the smartphone hasn’t been revealed by the company. However, the picture posted by Android Enterprise on its website looks more like the LG G7 Fit than the LG W10. The specifications listed on the website states that the smartphone will come with a 6.2-inch touch screen along with Android 9 Pie.

Now, talking about the leaked specifications of the LG W10, we see that the upcoming smartphone from LG will reportedly sport a 6.2-inch display and it will be running the latest Android OS. The mobile phone will reportedly come with 3GB of RAM along with 32GB of internal storage as its base version. There is a possibility that the LG W10 could be launched in more than one variant. The listing also reveals that the smartphone will come with a fingerprint scanner, but it doesn’t support NFC and zero-touch. The LG W10 is not rugged certified either.

As per the teasers of the upcoming smartphone, it can be assumed that this mobile will sport a waterdrop-style notch. But the image published alongside the specifications of the LG W10 is of LG G7 Fit with a full notch display that brings a bit of skepticism.

As said, LG is expected to launch its first and new W-series smartphones in India in the coming days. The company also partnered with Amazon India which further hints that it will be exclusively sold on this large e-commerce website. And since the leaks of the LG W10 come right after the tease made by the company it can be assumed that the upcoming smartphone in the W-series is the LG W10.

Aman Singhhttps://www.gadgetbridge.com/
Aman Kumar Singh has a Masters in Journalism and Mass Communication. He is a journalist, a photographer, a writer, a gamer, a movie addict and has a love for reading (everything). It’s his love of reading that has brought him knowledge in various fields including technology and gadgets. Talking about which, he loves to tweak and play with gadgets, new and old. And when he finds time, if he finds time, he can be seen playing video games or taking a new gadget for a test run.
Facebook
Twitter
WhatsApp
Linkedin
ReddIt
Email
Previous articleDota Underlords beta version is currently available for free on Steam, Google Play Store and Apple App Store
Next articleApple recalls 2015 MacBook Pros with Retina Display due to battery related issues