The Television will be available via Flipkart 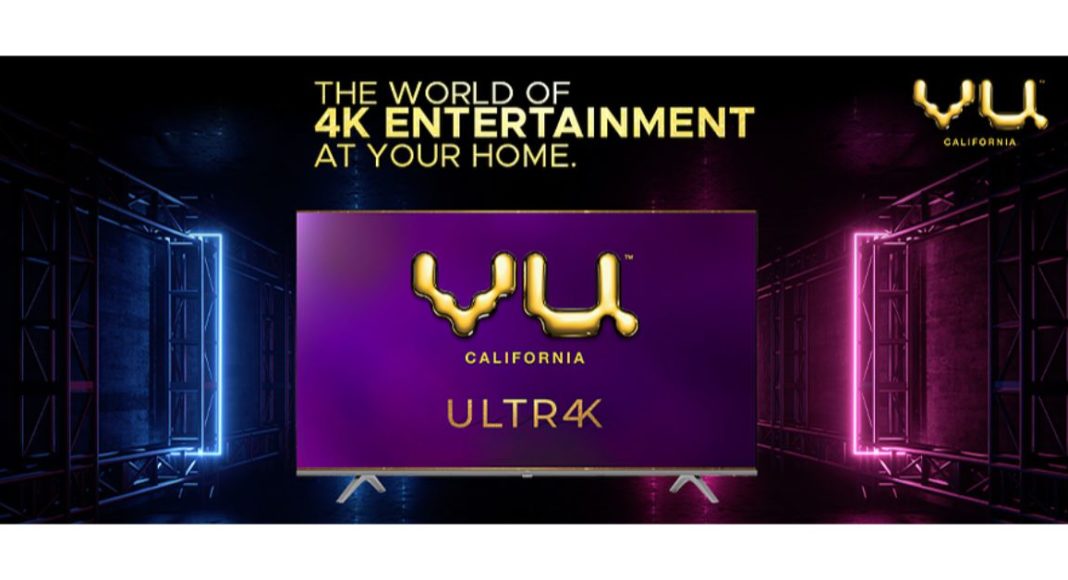 California-based Vu Televisions has expanded its range of televisions in India with the launch of its latest 4K Android smart TVs. The newly launched Vu 4k Ultra televisions from the company are now available in four different sizes 43”, 50”, 55” and 65”. According to the company, the televisions come with an Ultra-edge 4K Display with 40 % Enhanced Brightness, Backlight Controller, Upbeat Surround Sound, Pro-picture Calibration as well as Parental Block features.

Speaking about the launch, Devita Saraf, Chairperson and CEO, Vu Technologies said, “In the last one month Vu has emerged as the #1 television brand in India. We have sold over 50,000 television sets in May. This just goes to prove that our product quality, innovations, features and customer service are unmatched. Our new 4K Ultra TV has been designed keeping in mind the needs of our customers who are working from home, binge-watching, and looking at television as an entertainment source for the entire family.”

The lineup of Vu Ultra 4K TV comes with a Direct LED (DLED) display with 3,840×2,160 pixels of resolution. It will present 400 nits of brightness. The Television has an arrangement of LEDs at the back of the LCD panel to light up the screen to include the viewing angle. The Television comes in four sizes 43-inch, 50-inch, 55-inch and 65-inch.

The Vu Televisions are supported by Dolby Vision, HDR10, and Hybrid Log-Gamma (HLG) standards that enhance the overall viewing experience. For acoustics, there is  Dolby Digital+ and DTS Virtual X surround sound support. All the variants of the Television boast dual speakers along with various modes such as Standard, Theatre, Sports, Music, and Late Night. Te Vu Television runs on Android TV 9 and comes pre-installed with Google Play and has other important features such as Google Assistant for voice control. Video streaming apps such as Netflix, Amazon Prime Video and YouTube comes pre-installed. The Vu Ultra 4K TV series is powered by a quad-core SoC with  Mali-470 GPU, It offers 2B of RAM and 16B of storage. In terms of connectivity, there is Wi-Fi 802.11ac (dual-band), Bluetooth v5.0, three HDMI ports, two USB ports, an earphone jack, optical audio, RF analogue port, AV input, an Ethernet port and Chromecast support. Another important feature added in this range of television is Parental Block. With the families spending time at home together this feature will allow parents to control what their kids are watching while they are at home.

Komila Singhhttp://www.gadgetbridge.com
Komila is one of the most spirited tech writers at Gadget Bridge. Always up for a new challenge, she is an expert at dissecting technology and getting to its core. She loves to tinker with new mobile phones, tablets and headphones.
Facebook
Twitter
WhatsApp
Linkedin
ReddIt
Email
Previous article
Twitter’s adaptation of stories “Fleets” arrived in India, now accessible via the mobile app
Next article
Lenovo introduced its latest IdeaPad Slim 3 with 10th Gen Intel Core processors in India