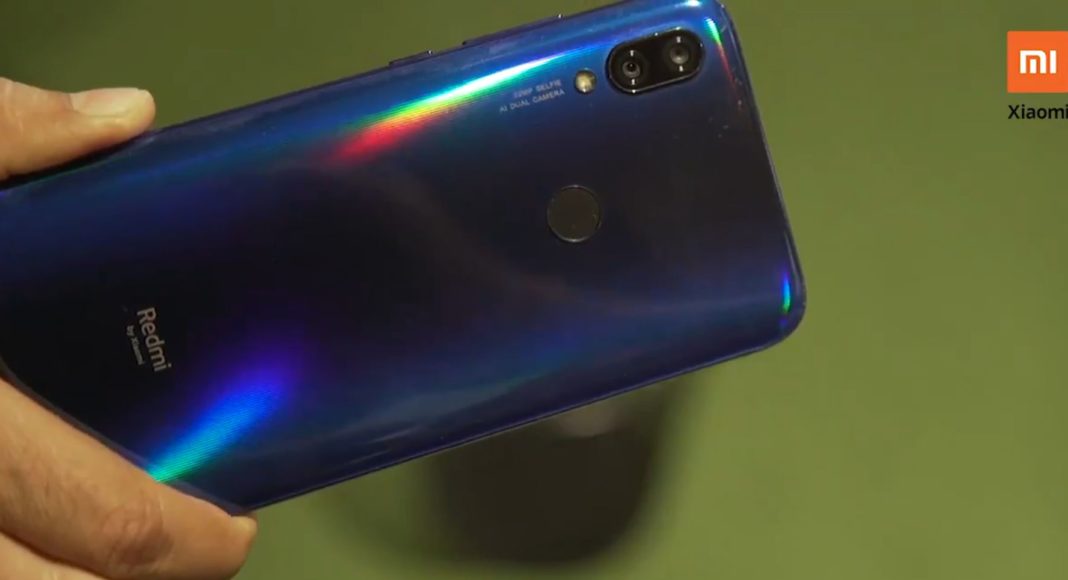 Xiaomi is gearing up to unveil its new camera-centric smartphone named the Redmi Y3, which will succeed the Redmi Y2 that was launched last year. The official launch date of the Redmi Y3 is scheduled for April 24. But days ahead of its launch, the official video teaser of the Redmi Y3 has been released on YouTube. The video showcases Redmi Y 3 and its display with waterdrop shaped notch which, according to Xiaomi will include the 32MP selfie camera. In addition to this, it can be seen that Redmi Y3 has a gradient back finish with a rear-mounted fingerprint scanner.

It will also have a dual-rear camera setup and will come with 4,000mAh battery. The video was published by Redmi India’s Twitter handle and it shows how durable the Redmi Y3 is. In the video, the smartphone can be seen kept in a bucket and it was tumbled down the. Once the ‘tumbling’ stopped, the Redmi Y3 was unbroken and intact without any scratches or broken parts.

Looking at the video, we see that the Redmi Y3 sports a large and vibrant display with a water-drop style notch with thick top and bottom bezels. However, the ones on the sides are shown to be thin. Moreover, it sports a dual-rear camera setup with a front 32MP selfie camera. The video also showcases the UI the Redmi Y3 will be running and looking at the type and style of icons, we can say that it runs on the MIUI 10. The UI will most probably be on top of the Android 9 Pie.

As mentioned earlier, the Redmi Y3 will be launched by the company in India on April 24 at an event in New Delhi. Prior to its launch some of the details have already been revealed by the company like its 32MP selfie camera and its 4,000mAh battery. But we will have to wait for the launch of the device to see what other specifications the Redmi Y3 holds.

There. Dropped it down the stairs. Will you drop your phone like that? #32MPSuperSelfie coming on 24-04-2019 pic.twitter.com/b998mk8JRS

Furthermore, it is also expected that the Chinese smartphone giant will also be launching the Redmi 7 alongside the Redmi Y3. And it won’t be a surprise if the company releases two phones at the same event. To recall, at Redmi Note 7 Pro’s launch event, the company launched Remi Note 7 as a surprise. So, it wouldn’t be surprising to see if Xiaomi plays the same card again.

Aman Singhhttps://www.gadgetbridge.com/
Aman Kumar Singh has a Masters in Journalism and Mass Communication. He is a journalist, a photographer, a writer, a gamer, a movie addict and has a love for reading (everything). It’s his love of reading that has brought him knowledge in various fields including technology and gadgets. Talking about which, he loves to tweak and play with gadgets, new and old. And when he finds time, if he finds time, he can be seen playing video games or taking a new gadget for a test run.
Facebook
Twitter
WhatsApp
Linkedin
ReddIt
Email
Previous articleRealme 3 Pro vs Samsung Galaxy M30 vs Redmi Note 7 Pro: Comparison
Next articleBlaupunkt SBWL-01 Wireless Soundbar with Dolby Digital launched in India: Price and specifications