Wimbledon 2019: Easter egg tribute by Google, here is how you can find and play it

Google has put in an Easter egg in its search system, here is how to find it 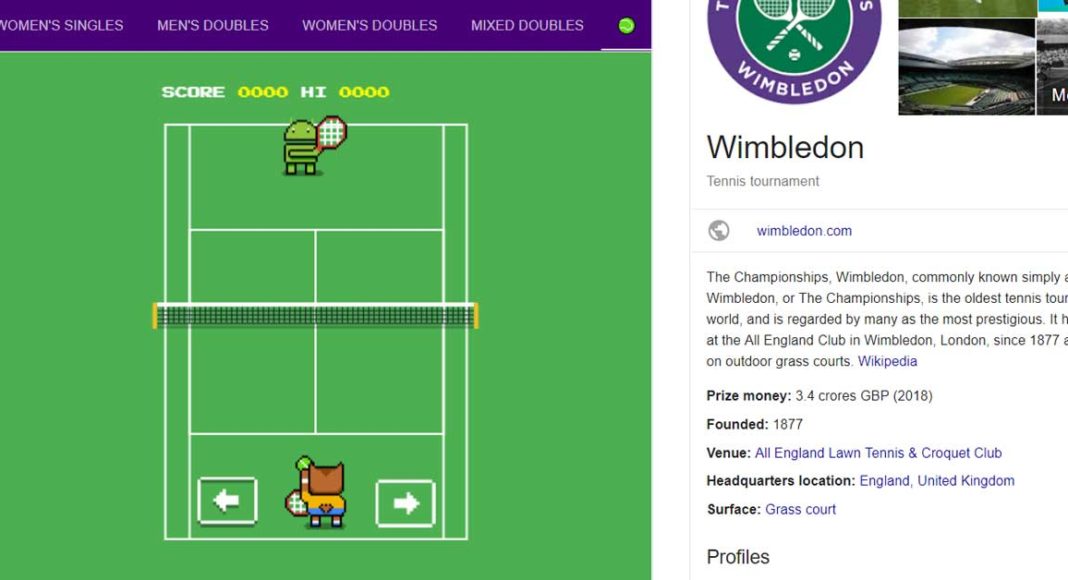 Google is known to put Easter eggs in their search or allied systems. Today is the turn of Wimbledon fans. Wimbledon 2019 is on its way and a lot of upsets have already been seen on the Tennis turf. Though for India Cricket world cup was in the news all the time for India, but for the rest of the world (mostly) all eyes were glued on Wimbledon 2019. Nadal and Federer’s match is what everyone has been talking about lately. And in the middle of it, Google puts an Easter on their search engine to heat things up. It will come on the search results if you type Wimbledon or #wimbledon, along with the scorecard.

Here are the exact steps you need to follow to find the Wimbledon 2019 Easter egg:

Yes, the Wimbledon Easter egg is a tennis game much like the one you saw on old NES gaming systems. Here you would need to play against a robot. The robot is in the form of a cat, android or an astronaut while you are also in the form of an astronaut, owl, a cat etc. It is a fun game where you have to use the left or the right keys on the keyboard to start the play. You are always serving and the computer will strike back.

The aim of the Wimbledon game is simple, keep hitting the ball by using left or right cursor keys. As the game passes the by, the speed of the ball keeps increasing. The best score we have had in it is 18 and the ball speed was quite a scorcher by then.  The tennis ball is not available on all browsers, but if you have the Chrome browser then you are definite to get it as the last tab on the scorecard.

Google keeps pushing an Easter egg every now and then. The last one was the of the Avengers Infinity gauntlet from the movie Avengers: Endgame. Clicking on the gauntlet, some of the search results evaporated from the search page. Much like the heroes from the Avengers: Infinity War movie.