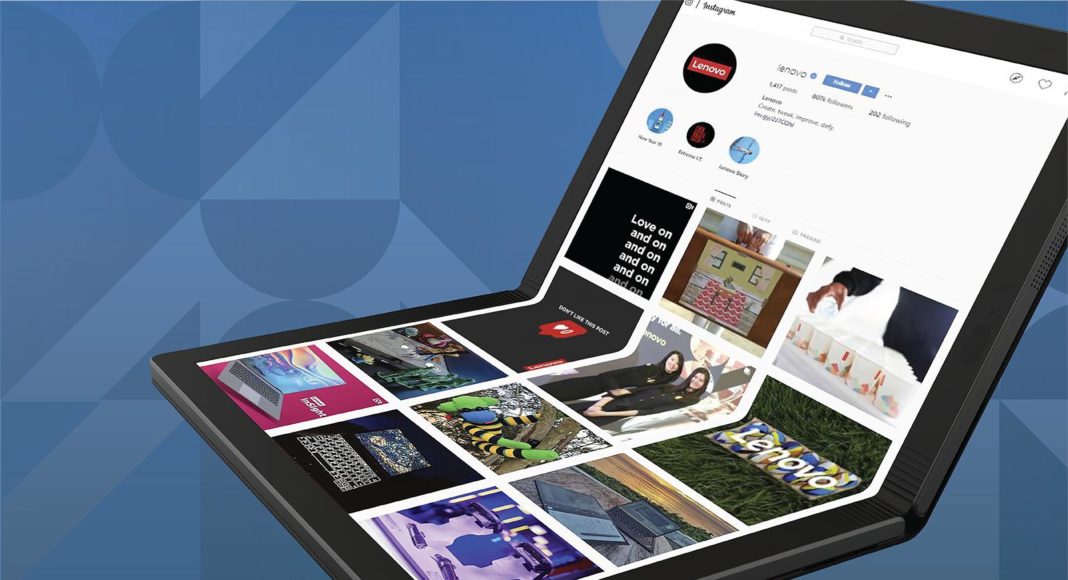 Computer and electronics maker Lenovo unveiled the world’s first foldable laptop in its Lenovo Accelerate event. The company previewed the concept foldable PC which is similar to the foldable smartphones but still different. The foldable PC is named Lenovo ThinkPad X1 and it belongs to the ThinkPad-series of laptops. The company says that the new laptop is aimed at highly mobile and tech-savvy professionals who want the best hardware with portability.

According to Lenovo, the ThinkPad X1 is neither a phone, nor a tablet but it is a full-fledged laptop with a foldable screen. And since it is a concept machine, the price, availability or other major details hasn’t been revealed by the company yet.

The Lenovo ThinkPad X1 sports a 13.3-inch (when unfolded, on being folded it is 9.6-inches) OLED 2K display made by LG Display with thin bezels. When unfolded, it looks like a huge tablet, but when folded, it looks like a laptop without a keyboard. It is powered by Intel CPUs and runs Windows operating system. The CPU and the Windows version used in it is currently not available but Lenovo has said that the Lenovo ThinkPad X1 will go on sale in 2020.

It comes with features such as stereo speakers, and a pair of USB Type-C ports along with an infrared camera. It also supports Bluetooth Keyboard along with support for Wacom pens to use as a stylus. The Lenovo ThinkPad X1 can also offer a full-day of battery life to the users.

The users can position the Lenovo ThinkPad X1 as per their use, they can use it as a replacement for their laptops or make it work as a PC. It utilizes a torque hinge which enables the screen to be positioned at different angles without breaking. It can also be positioned as a regular laptop. Even though it is a concept device it is still a product in the Lenovo’s ThinkPad line-up of laptops so it will give similar performance and quality the series is known for. Lenovo has used double hinge cycles so that the fold-unfold cycle of the Lenovo ThinkPad X1 doesn’t put a strain to the device or break it.

According to Lenovo, it took three years of development to develop the Lenovo ThinkPad X1. When launched for commercial use in 2020, the Lenovo ThinkPad X1 will open a new way for portable PCs. But on the other hand, if things don’t go right, it too could end up as the Samsung Galaxy Fold.

Aman Singhhttps://www.gadgetbridge.com/
Aman Kumar Singh has a Masters in Journalism and Mass Communication. He is a journalist, a photographer, a writer, a gamer, a movie addict and has a love for reading (everything). It’s his love of reading that has brought him knowledge in various fields including technology and gadgets. Talking about which, he loves to tweak and play with gadgets, new and old. And when he finds time, if he finds time, he can be seen playing video games or taking a new gadget for a test run.
Facebook
Twitter
WhatsApp
Linkedin
ReddIt
Email
Previous articleLenovo ThinkBook 13s and the ThinkBook 14s with thin bezels and 8th gen Intel CPU launched: Price and details
Next articleCanon EOS 200D II DSLR camera launched in India: Price and specifications