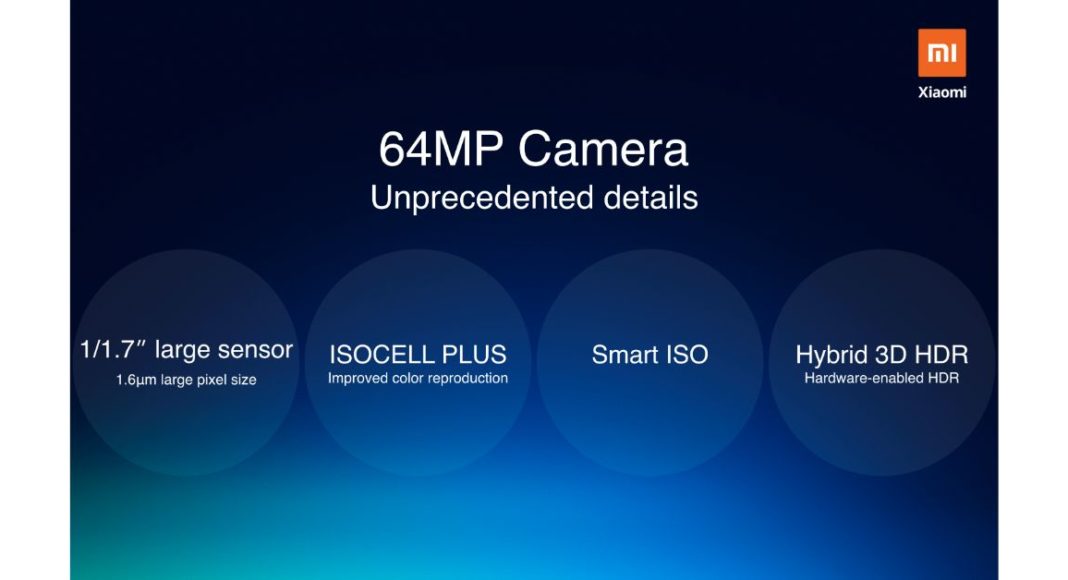 Chinese smartphone company Xiaomi lately launched Redmi K20 and K20 Pro in India. Both the handsets come with a triple rear camera set up that includes 48MP Sony IMX586 sensors. Following this now the company is developing a new smartphone that will feature a 64MP camera. Today at a global event in Beijing Xiaomi displayed its first 64MP smartphone imaging technology.

The company also revealed that the said smartphone will be launched in India in the fourth Quarter of 2019. The device will be introduced under the company’s sub-brand Redmi that will be using Samsung’s ISOCELL Bright GW1 sensor. The GW1 sensor makes use of ISOCELL Plus technology in order to develop a pixel-to-pixel barrier that helps in reducing light interference between pixels and therefore improves colour reproduction.

Samsung’s ISOCELL Bright GW1 sensor offers 64MP photos with a resolution of 9,248 x 6,936 pixels. This comes with the support for HDR of up to 100-decibels.

A few months back Samsung launched a 64MP camera sensor. The latest sensor is ISOCELL Bright GW1 and it can click 64MP photos using Samsung’s Tetracell technology by merging four pixels into one. The new sensor uses 0.8μm-sized pixels and it has the ability to capture more light with its large sensors.

Last month Xiaomi on its Weibo account teased an image revealing the world’s first 64MP camera smartphone. The leaked image revealed the camera sample of the 64MP sensors that that reads Redmi’s first 64UU megapixel photo. It further declared that the mobile phone winds into the 64 million era. However, while teasing the image, the company did not reveal Samsung’s ISOCELL Bright GW1 sensor will be used to support the device or not.

According to previous reports, it hinted that Xiaomi will be using Samsung‘s ISOCELL Bright GW1 sensor in its upcoming devices. Additionally, the pre-installed MIUI camera app also revealed that the existence of the 64MP camera sensor in the Xiaomi’s devices. Not only this the camera App also hinted of an “ultra-pixel” mode that has an ability to engage with the large megapixel count.

Here we would like to mention that Xiaomi is not the only brand that will bring a 64MP camera smartphone. Samsung is also gearing up to introduce a 64MP camera device that will join Galaxy A-series smartphones.

Realme will also introduce its 64MP camera handset and is rumoured to be called Realme 5 pro.

In the meantime, Realme India CEO Madhav Seth shared the first image of the 64MP smartphone on his Twitter account. The tweet says, “Get ready for the world’s first hands-on experience of #64MP Quad Camera on a smartphone, tomorrow at the #realme camera innovation event. Stay Real, No Hype. #LeapToQuadCamera”

Get ready for the world's first hands-on experience of #64MP Quad Camera on a smartphone, tomorrow at the #realme camera innovation event. Stay Real, No Hype. #LeapToQuadCamera pic.twitter.com/TBEFd84OIV

Komila Singhhttp://www.gadgetbridge.com
Komila is one of the most spirited tech writers at Gadget Bridge. Always up for a new challenge, she is an expert at dissecting technology and getting to its core. She loves to tinker with new mobile phones, tablets and headphones.
Facebook
Twitter
WhatsApp
Linkedin
ReddIt
Email
Previous articleSamsung Galaxy Note 10 with S-pen to launch in New York today: How to watch the live stream
Next article Vivo S1 32MP front facing camera launched in India