The TVs hold the Toshiba branding on them. 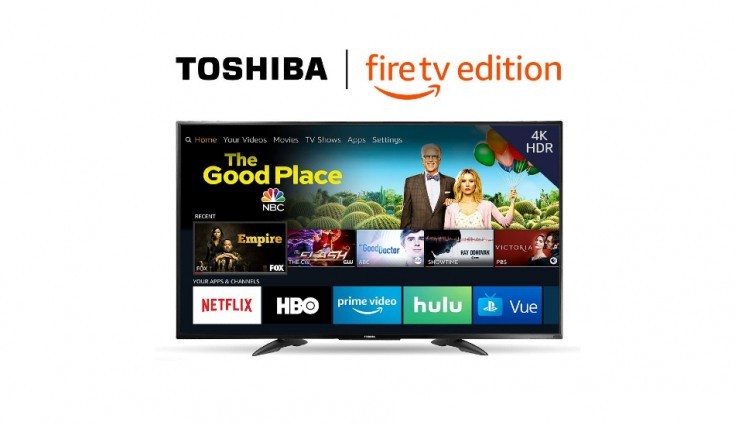 Amazon has been selling its Fire TV and the inexpensive, affordable 4K TVs with Fire TV software built in them for quite some time. But now, Amazon has announced a new and the first TV model, which comes with Dolby Vision support. This TV is manufactured by Toshiba and it will be sold exclusively by Amazon and Best Buy.

As mentioned above, the new TVs with Dolby Vision support will exclusively be available on Amazon and Best Buy. Currently, their availability in other markets is not known.

Sandeep Gupta, Amazon’s VP of Fire TV development said, “We worked closely with Best Buy and Dolby to build an amazing TV. In launching our products over the last year, we’ve wanted to make sure they follow our philosophy: simpler and smarter.”

Amazon’s new and inexpensive TV comes with Dolby Vision in an HDR format that offers a wider range of colours and more highlights than a regular TV. According to the company, the new HDR in the TVs is even superior to the HDR10 as it can adjust the picture quality of the content greatly (scene-by-scene) while HDR10 applies a single setting to the entire content. And as mentioned above, it comes in three different screen sizes with varying prices – 55-inch, 50-inch and 43-inch.

Amazon has also integrated its voice Assistant Alexa support with the Fire TV software so that the user can give voice commands using Alexa to their Fire TV. When the user uses Alexa’s voice commands, the Fire TV automatically will tune either to the user’s OTA antenna tuner or to an OTT service like the PlayStation Vue. Alexa will choose what platform the user uses on Fire TV to watch and will choose according to it. The Fire TV Edition television sets can even be controlled using Amazon Echo speakers.

Aman Singhhttps://www.gadgetbridge.com/
Aman Kumar Singh has a Masters in Journalism and Mass Communication. He is a journalist, a photographer, a writer, a gamer, a movie addict and has a love for reading (everything). It’s his love of reading that has brought him knowledge in various fields including technology and gadgets. Talking about which, he loves to tweak and play with gadgets, new and old. And when he finds time, if he finds time, he can be seen playing video games or taking a new gadget for a test run.
Facebook
Twitter
WhatsApp
Linkedin
ReddIt
Email
Previous articleOn fifth edition of International Yoga Day download this app or goto this website and learn purest form of Yog as well as Meditation
Next articleSamsung Galaxy Note 10 might not come with an earpiece speaker, will feature Sound on Display.