IFA 2018: What to expect from Samsung, Sony, Motorola and others 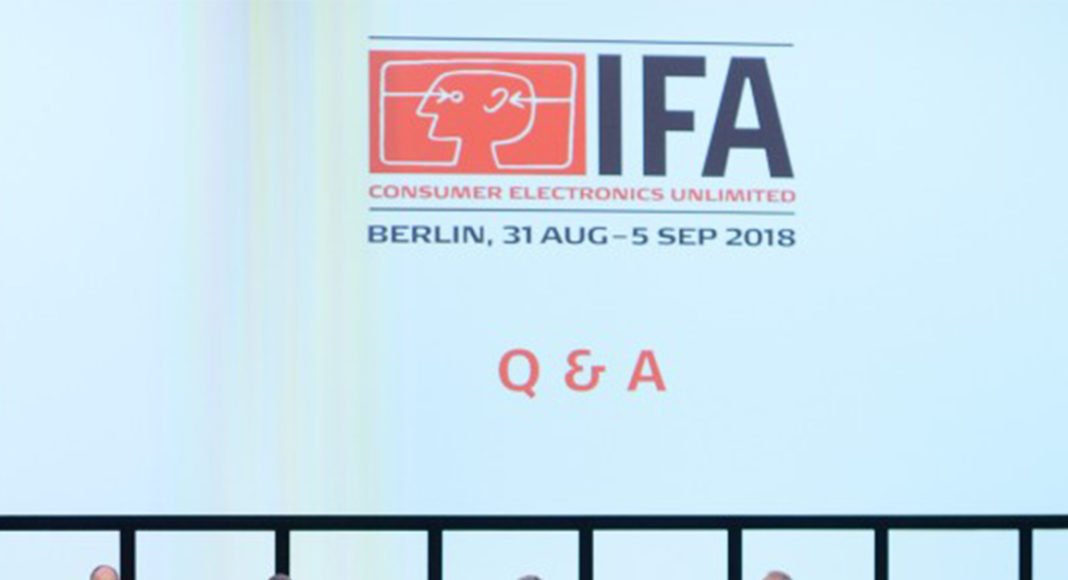 Keeping CES aside, IFA is one of the biggest annual tech shows in the world. And like every year, a host of technology companies are on their way to Berlin to showcase their latest gadgets. Before the event kicks off on August 31, we decided to list down everything that you can expect from IFA 2018:

Samsung: The South Korean technology giant will reportedly be showcasing an 8K QLED TV at IFA 2018. There are also reports that the Bixby Speaker that the company announced at Samsung Galaxy Note 9 launch will also be there for a closer look at the show. It is also expected to unveil its updated wireless devices at IFA 2018.

Sony: Sony’s plans for IFA 2018 involve bringing out its updated XZ3 smartphone. An image of the smartphone was recently leaked online and it looks nearly the same as Sony Xperia XZ2 Premium. So, an upgrade in specifications of the smartphone is expected. The company is also expected to showcase its upgraded music players from its Walkman range at IFA 2018.

Blackberry: According to several media reports, BlackBerry Key2 LE – a cheaper version of BlackBerry Key2 – will be unveiled at IFA 2018. The new model of the smartphone is expected to be powered by Qualcomm Snapdragon 636 processor coupled with 4GB RAM and will house a 3,000mAh battery. In other words, its specifications are not as powerful as the BlackBerry Key2.

Huawei: Huawei is set to challenge its own P20 Pro smartphone by showcasing its Mate 20 lineup at IFA 2018. The Mate 20 lineup from Huawei also includes its Mate 20 Pro smartphone. While Huawei’s P series focuses on cameras and entertainment, the Mate series focuses on battery life and productivity. So we can say that the upcoming Huawei Mate 20 Pro is meant to be a ‘business phone’.

HTC: HTC has released a teaser – something U – for IFA 2018 and various leaks suggest that the company will be launching the HTC U12 Life at the tech expo. The smartphone is expected to come with a 6-inch display with 18:9 aspect ratio, a Qualcomm Snapdragon 636 processor clubbed with 4GB RAM and 64GB of inbuilt storage. It will also come with a dual rear camera setup.

Motorola: Motorola is totally expected to unveil its iPhone X inspired P30 smartphone at IFA 2018. The smartphone was announced in China earlier this month, and IFA 2018 will be the perfect platform to showcase it globally.

Lenovo: Speaking about Lenovo, the company is expected to showcase its updated laptops. There is also a possibility of seeing a new ThinkPad at the IFA 2018.

Nokia: If rumours are correct, then HMD Global will be showcasing a new high-end smartphone powered by Snapdragon 845 — dubbed Nokia 9. It goes without saying that the smartphone is expected to come with other high end specifications too.

LG: Reports suggest that LG will be launching its new flagship smartphone — V40 ThinQ — which is said to sport five cameras in total. The company is also expected to showcase an exoskeleton robot that it has been teasing off late.

Dell: No guesses for this one. The company will be updating the specifications of its laptop and PC line-up for IFA 2018. Other innovations are also expected, but currently there’s no official word about it.

Avani Baggahttp://www.gadgetbridge.com
Avani has an immense love for reading, travelling and food, but not necessarily in the same order. Avani almost started pursuing law, but life had other (better) plans for her and she chose to be a writer instead (luckily!) She previously covered technology at Times Internet and wrote about smartphones, mobile apps and tech startups. When she’s not writing, you’ll be able to find her in book stores or catching up on her social life.
Facebook
Twitter
WhatsApp
Linkedin
ReddIt
Email
Previous article
Instagram rolls out new tools to curb spamming on its platform
Next article
Yu Ace smartphone with 4,000mAh battery launched in India: Price, specifications and more